The Volkswagen Beetle will get the axe at the end of this year, so we take the Final Edition Convertible out for one last spin.

Though this Volkswagen Beetle is called the Final Edition, it isn't the first time the model has disappeared. The original, air-cooled version stopped production in other markets in 2003, commemorated with the Última Edición. But this marks the end of the new Beetle, and if I'm honest, I'll miss it.

The 2019 Volkswagen Beetle provides a healthy dose of nostalgia at a decent price.

The Beetle lacks ADAS features that many consumers have come to expect.

The VW Beetle is a fun little runabout, but get it while you can as 2019 is the last year of production.
Watch this: 5 things you need to know about the 2019 VW Beetle Final Edition
01:13 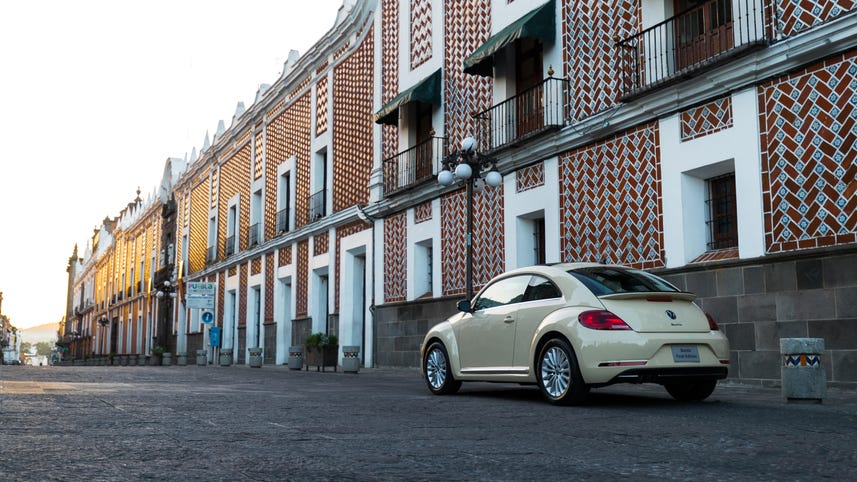 You can buy the Final Edition Beetle as a coupe or convertible, powered by a 2.0-liter, turbocharged I4 engine, mated to a six-speed automatic transmission. Final Edition models get their own special colors reminiscent of hues offered on the aforementioned Última Edición, called Safari Uni and Stonewashed Blue. Other Final Edition touches include diamond-stitched leather seats, metal scuff plates, stainless-steel pedals, unique wheels and a Safari Uni-colored dash panel.

If the Final Edition isn't your jam, the Beetle is still offered in S and SE guises for 2019, again powered by the 2.0T/6-speed auto combo.

Behind the wheel, the Beetle is enjoyable to drive. The turbo engine pushes out 174 horsepower and 184 pound-feet of torque, which aren't whack-a-doo numbers, but provide adequate motivation for zipping through traffic. The suspension is too softly sprung to make the Beetle an engaging canyon-carver, and the transmission is tuned for efficiency first and sportiness second. But when I drop the top and put my foot down, the Beetle rewards with an easygoing, pleasant driving experience.

Blind-spot monitoring is standard, and is helpful when the canvas top is up, closing off a good chunk of your rear-side view. If you're looking for other driving aids, however, you're out of luck. Given the car's age, it doesn't get any modern tech like adaptive cruise control, lane-keeping assist or anything else.

Cabin tech is surprisingly robust, with my Final Edition SEL model packing a 6.3-inch infotainment screen with navigation, Apple CarPlay and Android Auto. (The base Beetle, meanwhile, has a 5-inch screen that lacks these amenities.) VW's Discover Media interface is uncomplicated, with large tiles on the display and plenty of redundant buttons around the outside of the screen. Only one USB port is available, however, so passengers will have to keep their smartphones charged via the 12-volt outlets available up front and in back.

With the top up, the Beetle's cabin is pretty quiet -- better than what I originally expected. The top folds back in less than 10 seconds, and can be operated at speeds up to 31 miles per hour. Even with the top back, wind buffeting is kept to a minimum, and I'm able to easily have a phone conversation over Bluetooth with the top down.

The last hurrah of the Volkswagen Beetle

I like the comfy, leather seats, and generally find the Beetle's interior a nice place to spend time. There's a lot of hard plastic throughout, but the main touch points feel perfectly fine. The Safari Uni-colored dash panel harkens back to the metal dash of the old VW Bug, complete with the secondary "käeferfach" glovebox.

Where the Beetle Convertible suffers is in cargo room. The Beetle Coupe offers 15.4 cubic feet of space in its trunk, which drops to a measly 7.1 in the Convertible. But hey, at least the back seats fold flat so you can get a little more utility for longer items.

The trouble with the Beetle is that there are plenty of other small runabouts that offer a better driving experience. It's hard to argue against the greatness of the Mazda MX-5 Miata or its Fiat 124 Spider counterpart. On the hardtop front, there's always the Fiat 500 Abarth, or the Subaru BRZ and Toyota 86 twins. In all of these cases, I can't really imagine picking the Beetle.

Still, there's something about the Beetle that tugs at my heartstrings. This little guy has been a near constant throughout my life -- I even raced the Baja 1000 in a stock 1969 Beetle. It's been rumored the Beetle could return again someday, possibly with electric power. Consider my fingers crossed.