Stylish, functional and loaded with tech, VW’s new Arteon makes a strong case for being cross-shopped against luxury players.

Volkswagen says the 2019 Arteon is its flagship, and the spiritual successor to the recently departed CC. That's all true, don't get me wrong, but calling the Arteon an expensive Vee-Dub sells this car short.

The 2019 Volkswagen Arteon has a smooth, turbocharged engine, and packs enough style and luxury that it can compete with cars costing twice as much.

A lot of premium tech features and advanced driving aids are only available on the most expensive SEL Premium 4Motion model.

With its smooth on-road demeanor and appealing exterior, the Arteon feels like a serious luxury bargain.

Instead, think of the Arteon as an Audi A7 for half the price. It offers great style and premium accommodations, and it ain't too shabby to drive, either. Wrap all that up in a package that starts under $40,000, and you'll find the Arteon is a serious luxury bargain with very little in the way of compromise.

Don't call it a sedan

The Arteon makes a killer first impression. We're living in the age of the massive, non-functional grille, but the Arteon wears its wide, slatted mug with pride. I like how the LED running lights are integrated into the design of the grille's horizontal bars. And while the car you see here uses the Arteon's standard front-end design, R-Line models bring larger air dams that add purposeful aggression to the lower sides of the front fascia.

With wheels pushed out to all four corners and an arched roofline, the Arteon strikes a pose similar to its CC forebear, but one that's more grown up. Even the Arteon's smallest 18-inch wheels look nice on my SEL-trim test car, though the optional 19s and 20s definitely give this svelte four-door a big boost of curb appeal.

Unlike the CC sedan, the Arteon uses a liftback design, meaning this VW backs up its form with some seriously useful function. Open the hatch and you'll find 22.7 cubic feet of cargo space, which is larger than most sedans of this size. Fold the rear seats and the usable area swells to 55 cubic feet, which is comparable to many compact and midsize SUVs. Of course, the similarly shaped Buick Regal offers a whopping 60.7 cubic feet of space underneath its hatch, but the tradeoff there is having to deal with General Motors' drab, dingy interior.

The Arteon, meanwhile, offers plush accommodations for four adults, with some of VW's best interior trimmings to date. You'll find the occasional strip of hard plastic on the bottom of the transmission tunnel or below the steering wheel, but 95 percent of the surfaces you're actually going to see and touch every day feel great.

The two-tone Nappa leather seating surfaces of my SEL tester are comfy, though I wouldn't mind a little more love-handle support. Heated front seats are standard on every Arteon, though niceties like ventilated and massaging front seats, as well as heated rear seats, can only be had on the range-topping SEL Premium.

Speaking of the rear seats, they're surprisingly spacious. With the front chairs slid as far back as they'll go, I can comfortably stretch out in the second row. Granted, I'm of average height, but taller friends who've spent time in the Arteon say they have no issues with rear-seat legroom, either. That said, the tapered roofline means rear headroom isn't a strong point, but only the most gigantic of passengers will feel that penalty. 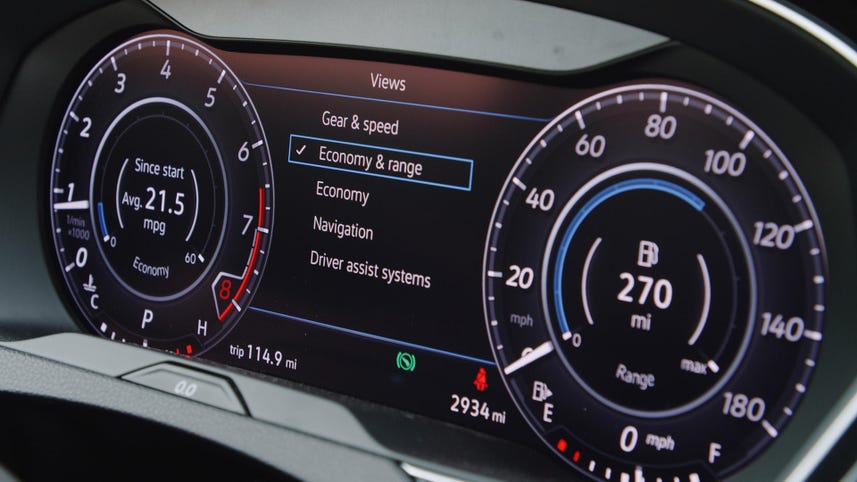 Checking the tech in the 2019 Volkswagen Arteon
1:58
Watch Now

Lots of tech, but it'll cost you

All Arteons come with an 8-inch touchscreen display, with Apple CarPlay and Android Auto along for the ride. Volkswagen's infotainment interface is super simple to use, with large tiles for main vehicle functions, and secondary menu buttons that only appear as your finger approaches the screen. Volume and tuning knobs, as well as flush-mounted buttons, are located on either side of the screen, set in fingerprint-revealing piano black trim.

Step up to the Arteon SEL and you'll unlock a number of additional tech goodies, starting with embedded navigation in VW's multimedia system. Choosing the SEL also gets you Volkswagen's excellent Digital Cockpit gauge cluster, with its crisp, high-resolution, reconfigurable screen.

Spec the SEL and you'll also get adaptive cruise control, which comes in addition to the Arteon's standard rear traffic alert, backup camera and forward collision warning with automatic emergency braking. Unfortunately, advanced driving aids like lane-keeping assist, parking assist with front and rear distance sensors, automatic high-beams and an overhead camera can only be had on the top-shelf SEL Premium 4Motion.

Regardless of trim, every Arteon sports the same powertrain: Volkswagen's 2.0-liter, turbocharged I4, with 268 horsepower, 258 pound-feet of torque and an eight-speed automatic transmission. Both the SE and SEL models can be had with 4Motion all-wheel drive for an additional $1,800. Adding all-wheel drive also reduces the EPA fuel economy estimates slightly; with front-wheel drive, the Arteon is said to return 22 miles per gallon city and 31 mpg highway, while AWD models are rated at 20/27 city/highway mpg.

There's ample turbo power for both initial and midrange acceleration, and the eight-speed transmission largely fades into the background while commuting. Stomp the throttle and the transmission needs a sec before it'll activate a downshift. And oddly, steering wheel-mounted paddle shifters are optional on every Arteon but the top SEL Premium 4Motion (where they're standard). I can't imagine willingly paying for them -- just leave the transmission alone, and if you really feel like being the master of your own destiny, use the toggle function of the PRNDL shifter.

I wouldn't exactly call the Arteon a thrill to drive, but it moves down the road with satisfying poise and confidence. Volkswagen's XDS cross-differential system is standard on all Arteons, which helps deliver torque appropriately between the front wheels. Eco, Normal, Comfort, Sport and Custom drive modes change the experience slightly, and the DCC adaptive damping system allows for 15 degrees of suspension firmness adjustment which, frankly, feels like overkill, since the actual difference between each individual level is barely noticeable.

In its Comfort and Normal modes, the Arteon offers a plush ride that doesn't translate most pavement irregularities into the cabin. (The taller sidewalls of my tester's 18-inch wheels surely help here, too.) Dial up Sport and the transmission is both more hesitant to upshift and more eager to downshift, and you'll feel more weight in the steering. Honestly, I found the best thing to do was to use the Custom drive mode, with the steering set to Sport but the suspension set to Comfort. And hey, point to the Arteon, if you choose the Custom drive mode, it'll default to that every time you get in the car.

Really, the Arteon isn't all that far off from many of its luxury-brand rivals. The steering is relatively light but quick and responsive, and the ride quality is superb -- you could really pile on the miles in this thing. Combine that with a quiet cabin and great visibility from all angles, and the Arteon is a car that goes down the road with a properly premium demeanor.

As far as traditional competitors go, the Arteon's closest rivals are the Buick Regal and Kia Stinger 2.0T. I can't imagine buying a Regal, period, let alone over the Arteon. And while the Stinger is a rewarding car to drive with bangin' style, the VW offers better luxury and tech.

Really, the Arteon is best viewed as a less-expensive alternative to things like Audi's A5 and A7 Sportback, or the BMW 4 Series Gran Coupe. No, it doesn't handle as well as those class-above Germans, and its badge doesn't quite carry the same provenance, but the Arteon can really hold its own in a number of areas. Combine that with the fact that the VW starts at $35,845 (not including $995 for destination) and tops out in SEL Premium 4Motion R-Line spec at $46,710, and this is one luxury bargain you'd be foolish to ignore.