2019 Toyota Corolla Hatchback review: The best it’s ever been

I only ever used to recommend the Toyota Corolla to people who didn't care about cars. If they wanted a car that was the equivalent of elevator music -- something that just kind of... exists in the background -- the Corolla was always my number one suggestion. It's not that the car was bad by any measure, it just lacked excitement in literally every way.

It’s a little tight in the back, any sporty semblance is in looks alone and Android Auto is nowhere to be seen.

If you’re not looking for a “driver’s car,” but rather a sensible car with a dash of style, the Corolla Hatchback is mighty appealing.

But I can't do that anymore. The 2019 Corolla Hatchback (née Corolla iM Hatchback, née Scion iM) gives the Corolla lineup something it hasn't had in years: character. 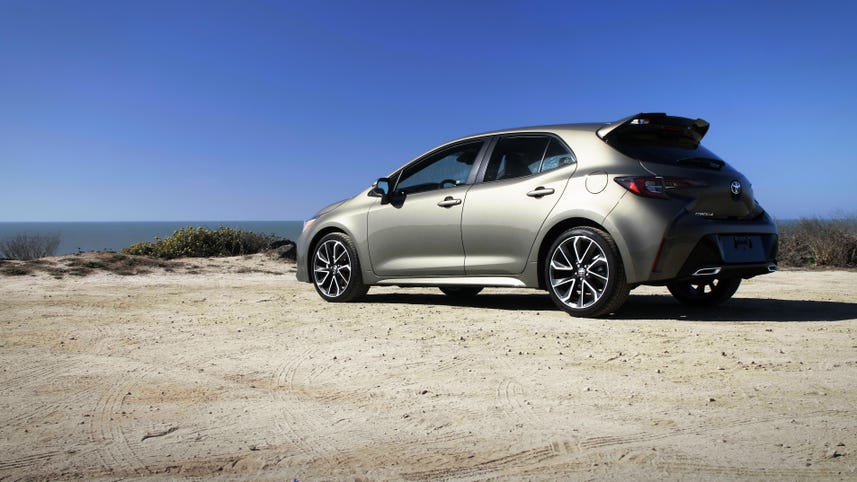 It's not exactly ready for Initial D, but the new Corolla Hatchback proves Toyota's designers are capable of making a good-looking car now and then. The automaker's corporate nose is much more subtle than it is on the current-generation Corolla sedan, the headlights and taillights are the right kind of thin and there's a heapin' helpin' of character on the sides. My XSE tester, the sportier trim of the two, has upsized 18-inch alloy wheels a surprisingly large (but not annoying) wing atop the hatch.

The interior also uses more expressive design, though it's a bit safer. There's a nice bit of layering between the top of the dash and the bottom, with some simulated stitching to give it a more premium feel. Everything is within plain view, and there are plenty of real buttons for the infotainment system and climate control. On the XSE trim, the seats are covered in both fabric and leather, the front row gets heating and the driver's seat is eight-way power adjustable.

One thing the Corolla Hatchback should have taken from its sedan sibling is rear legroom. The current Corolla sedan has exceptional rear legroom. Things are much tighter for my 6-foot frame in the back of the 'Back, which has surprisingly narrow door openings but, thankfully, ample headroom. Forward visibility is ample, but the rear hatch glass is a little small for my taste. The side mirrors are big enough to cover my blind spots without requiring a twist o' the neck.

Tech-rich, but with a notable omission

If safety is your jam, the Corolla Hatchback will delight. Both continuously variable transmission and six-speed manual variants get a number of standard safety systems, including automatic emergency braking with pedestrian and cyclist detection, lane-keep assist and adaptive cruise control.

Adaptive cruise control works well on my manual tester. It even permits clutch use for upshifts and downshifts, which I haven't experienced on any other cruise-control-equipped manual, adaptive or otherwise. The lane-keep system is a hands-on-at-all-times affair, but it holds the lane well, not ping-ponging between lines and generally staying dead center if you yourself are incapable of doing so.

On the XSE trim, I have not one, but two screens -- a 7-inch screen in the gauge cluster, and an 8-inch screen handling infotainment duties. The gauge screen offers two different styles, really only changing how you want the speedometer displayed. The center of the screen can swap between fuel economy, safety, music and other pertinent information using easily accessible switches on the steering wheel.

As far as infotainment goes, Toyota's Entune system is fine. The graphics are a bit behind the times, but the system performs its jobs quickly. Neither the base SE nor uprated XSE get standard embedded navigation -- that's part of a $1,600 package on XSE alone. And while offering Scout navigation via Toyota's app is a fine stopgap, I suppose, I still get mad that I have to offload part of my $23,000 car's job to an app. Thankfully, I have Apple CarPlay at my disposal, but Android users are plumb out of luck -- a surprising omission in 2018.

Not a driver's car, but way better than before

Toyota's new 2.0-liter I4 puts out 168 horsepower and 151 pound-feet of torque. While that seems fine on paper, it's a naturally aspirated engine and peak torque is all the way up at 4,800 rpm, which means you'll be jamming the gas for even the slightest improvement in forward motion, especially at highway speeds. Toyota needs to get with the times and embrace a turbo engine with a lower torque band, especially on a trim like the XSE that bills itself as being a little sportier.

My tester has a six-speed manual, which feels solid enough as it snicks through well-defined gates, although the throw is on the long side. The clutch pedal is a letdown, though, with zero feel that makes finding the bite point a constant guessing exercise. One flip of the "iMT" button engages rev-matching downshifts and adjusts engine speed for smoother upshifts, both of which work very well. It's a shame it defaults to turned-off with every press of the start button, though.

Around Detroit's iffy-at-best roads, the Corolla Hatchback is cool as a cucumber. The ride is composed, even with the XSE's thinner 225/40R18 Yokohama Avid GT all-season tires, and a great deal of outside noise is kept where it belongs. At highway speeds, there's a bit of wind noise but it's otherwise a comfortable, quiet affair. There's a lot of give in the suspension, which sort of ruins the driving dynamics when things get twisty, but it's still leagues better than any previous Corolla I've driven.

As for fuel economy, it's hit or miss. The EPA rates the manual Corolla Hatchback at 28 miles per gallon city and 37 highway, but the CVT variant achieves 30 city and 38 mpg highway. Even small changes in speed are major determining factors in my fuel economy -- between a steady 55 and 70 mph, I see close to 40 mpg highway, but anything north of 75 mph returns no better than 30-32 mpg, which is actually the same figure I saw in the city.

The Corolla XSE has a definite desirable advantage over the SE in the looks department, despite its fuel economy deficit. That puts me at $22,990 with a six-speed manual (no CVT for me, thanks). I would add the $1,600 option that includes embedded navigation, wireless phone charging and an 800-watt audio system. That puts me at $24,590, or $25,510 after the $920 destination charge.

The 2019 Toyota Corolla Hatchback has some very solid competition, including the Honda Civic Hatchback, Hyundai Elantra GT and Mazda3 hatchback. All three are superior driver's cars -- heck, you can get the 201-horsepower Elantra GT Sport for about the same price. The Corolla has the Civic beat on tech (minus its lack of Android Auto), as well as the Mazda, but Hyundai's tech offerings are hard to top in this segment.

Toyota's new Corolla Hatchback is fun to look at, comfortable to drive and its tech is no longer five years behind the competition. I can only hope that this is the start of something interesting in the Corolla lineup, rather than a one-off that won't translate to a redesigned sedan. Here's hoping.