Subaru's boxy SUV looks familiar, but it's loaded up with new camera-based technologies that improve safety and comfort.

The broad strokes of the Subaru Forester's functional aesthetic haven't changed much for this new 2019 generation. It's still upright, boxy and not too flashy. If you liked any previous generation of the Forester, chances are that you'll like this one, too.

Fuel economy hasn't improved much despite the move to a more efficient transmission.

For 2019, Subaru takes an "ain't broke, don't fix it" approach to the already solid Forester formula, but still manages to greatly improve safety and comfort.

The new Forester even manages to avoid the size-creep that you'd expect with a redesign for a new generation. The 2019 model looks wider than before, but that is an optical illusion thanks to stronger horizontal cues in the design of the nose and tailgate. The new Forester also managed to grow less than an inch longer from nose to tail, and it's no taller.

Sticking with what's familiar has its benefits. The characteristics I've always liked about the Forester's design -- the upright ergonomics of the driving position, the commanding view of the road, the bright, open greenhouse and strong sense of spaciousness in the cabin -- have all remained intact for 2019. In fact, Subaru has somehow managed to make the Forester even more spacious with improvements to legroom and an optional, massive panoramic power moonroof.

There are also changes on the inside including a new platform, a simplified powertrain strategy, and some interesting safety tech that keeps the Forester from feeling stale.

The most noteworthy new features for this generation are driver-aid technologies aimed at making the boxiest boxer safer on the road. Subaru's EyeSight system is now standard equipment for the 2019 Forester, so even the base models with no options come equipped with the automaker's stereoscopic camera setup.

EyeSight powers a wide range of active and passive driver-aid features, including adaptive cruise control that maintains a safe following distance behind a lead car at highway speeds and even in stop and go traffic. The system can even see and detect obstructions or pedestrians in the Forester's path and automatically apply the brakes to lessen or prevent an impact. The system also includes lane-departure warning with lane-keeping steering assist.

Perhaps the most interesting new safety feature is the DriverFocus system, which is only available on the top-trim Touring model. This upgrade adds an infrared camera to the dashboard that watches the driver's face to make sure you're alert and watching the road ahead.

Look away or down for too long and it will chide you with audible and visible alerts to keep your eyes on the road. If that doesn't work -- perhaps the driver is dozing or incapacitated -- it can even bring the car to a stop and contact emergency services via the StarLink infotainment system's cellular connection.

When it's not scolding you for looking at your phone, DriverFocus also has a few convenience benefits. Its facial recognition software can store up to five driver profiles after performing a facial scan. When you enter the vehicle, it will get a good gander at you and automatically recall your preferred seating and mirror positions. Of course, the facial recognition and the DriverFocus attention monitoring can be turned off, if you'd prefer your Forester not stare at you all day.

The Forester inherits the latest generation StarLink infotainment system that we've seen in the newest Imprezas and Crosstreks. Lower trim levels get a 6.5-inch system, while more premium models upgrade to a larger 8-inch unit. The StarLink software is easy to understand and use while rolling. The system's structure isn't very deep, so you won't spend much time digging through menus to find the functions you're looking for, which I always appreciate in software I'm using at 70 miles per hour.

I especially like the NFC touchpoint on the dashboard that allows for super simple pairing and unpairing of a bluetooth phone. Simply tap to pair and tap again to unpair. This little detail makes it easy to get connected when, say, you get a new phone or perhaps want to pair more than one family member's phone with StarLink.

Being a modern infotainment suite, StarLink is available with an onboard 4G LTE data connection, Wi-Fi hotspot sharing capabilities and a suite of onboard applications for audio streaming and such to choose from. However, I mostly stuck with the standard Android Auto connection, which allowed me to bring Google Maps and all of my favorite audio streaming apps on the road with a single USB connection. iPhone toters will be pleased to learn that Apple CarPlay is also standard. 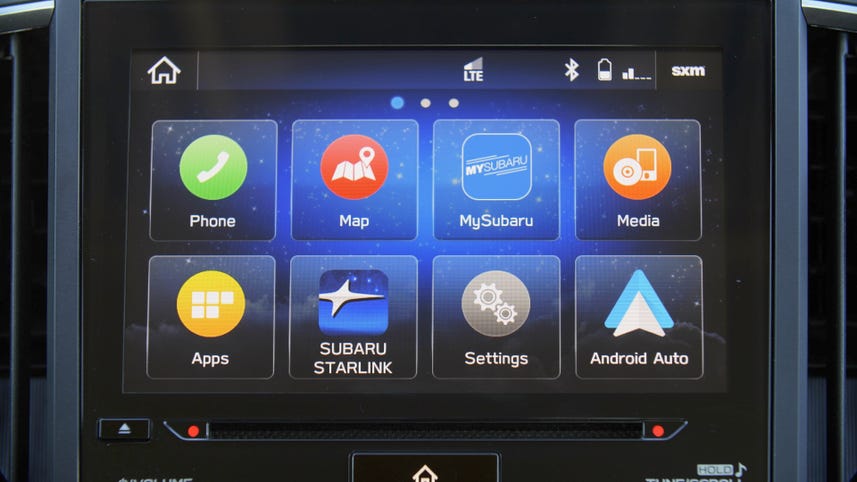 2019 Subaru Forester watches the road, keeps an eye on the driver
2:49
Watch Now

Underneath its new, yet familiar skin, the 2019 Forester is now based on the global Subaru platform that also underpins the Impreza and Crosstrek. That means the larger SUV shares those vehicles' 2.5-liter horizontally opposed (or "boxer") four-cylinder engine, making 182 horsepower and 176 pound-feet of torque. It's no surprise that the heavier Forester feels a bit less sprightly than its siblings, but there's still more than adequate power for acceleration and cruising.

The boxer-four is mated with a continuously variable transmission (CVT) that sends power to all four contact patches via Subaru's standard Symmetrical all-wheel-drive system. Drivers have a bit of control over how the powertrain operates via the Si-Drive system -- basically a toggle between normal and sport modes for the engine and transmission -- and Subaru's X-Mode traction system. Available on Sport, Limited and Touring models, a twist of the X-Mode knob on the center console allows the driver to shuffle between custom traction programs that optimize grip for specific conditions such as snow, dirt or mud.

The 2019 Forester can also haul a bit more, with an increase to 1,500 pounds of towing capability (enough for a small trailer or boat) and a new Trailer Stability Assist feature.

The switch to the global platform means that the Sporty XT model with its turbocharged engine and manual transmission is gone for this generation, which is a shame. Subaru thinks that most of its prospective Forester drivers will prefer the more laid-back driving style and has doubled down on comfort for 2019. The CVT and 2.5-liter is a capable and competent powertrain that's smooth and quiet in most daily driving situations.

Paddle shifters on my Touring model allowed me to trick the CVT into behaving like a seven-speed automatic, downshifting as I approached a corner or grabbing a few extra revs in anticipation of a highway pass. But it's not a rewarding or pleasant-sounding experience and I found that I was better off letting the CVT do its buttery smooth thing the vast majority of the time.

Likewise, the handling felt nicely planted and surefooted -- I could chuck it at a series of corners with surprising aplomb -- but the suspension tune and the physics of cornering in such an upright vehicle conspired to discourage extended spirited driving session. Everything about this new Forester seemed to say "chill out, dude" and "enjoy the ride" and I found that I was perfectly on board with that.

Stepping over to a CVT has allowed the 2019 Forester -- which is both slightly heavier and more powerful than before -- to step up to an EPA estimated 29 combined mpg (26 city and 33 highway), which is a gain of only one mpg over the old model's conventional six-speed automatic. The Subaru remains right in the middle of the pack for fuel economy in this class.

Subaru took an "ain't broke, don't fix it" approach here, but that doesn't mean it didn't fix and improve a lot with the 2019 Forester. It's a much safer and easy-to-live-with vehicle overall. A Honda CR-V or a Mazda CX-5 might be slightly more fun to drive, a Toyota RAV4 Hybrid would be much more efficient (and more ugly), but the Subaru's confident all-wheels-driven performance, greatly improved comfort and excellent mix of standard and unique optional safety features keeps the familiar Forester feeling fresh.

The Forester is, however, a little more expensive this model year. The Forester starts at $25,270 including a $975 destination charge and tops out at $35,270 for a top-of-the-line Touring model with Premium, Limited and Sport models fitting in between. That's a $500 to $1,200 price hike depending on where you land in the lineup, which I think is well worth it considering the extra standard safety equipment and other improvements for 2019. Even fully loaded, I think the Forester Touring is reasonably priced given all of the features that it brings to the table, so that's how I'd recommend you spec yours.

But as a fan of grippy cloth seats and eye-popping color schemes, I'd personally take the new Sport trim level with its orange interior and exterior accents, black wheels and dark grille for $29,770. A single $2,045 package adds blind-spot monitoring, rear cross traffic alert, reverse automatic braking, the 8-inch StarLink infotainment system with premium audio and a power rear hatch, bringing my total to $31,815 and saving about $3,500 versus the Touring. I'd have to make do without the DriverFocus attention camera and a few smaller bells and whistles, but I think I'd be OK without Subaru's eye upon me.