Porsche's new Speedster takes everything we love about the GT3 and adds that wind-in-your-hair thrill. 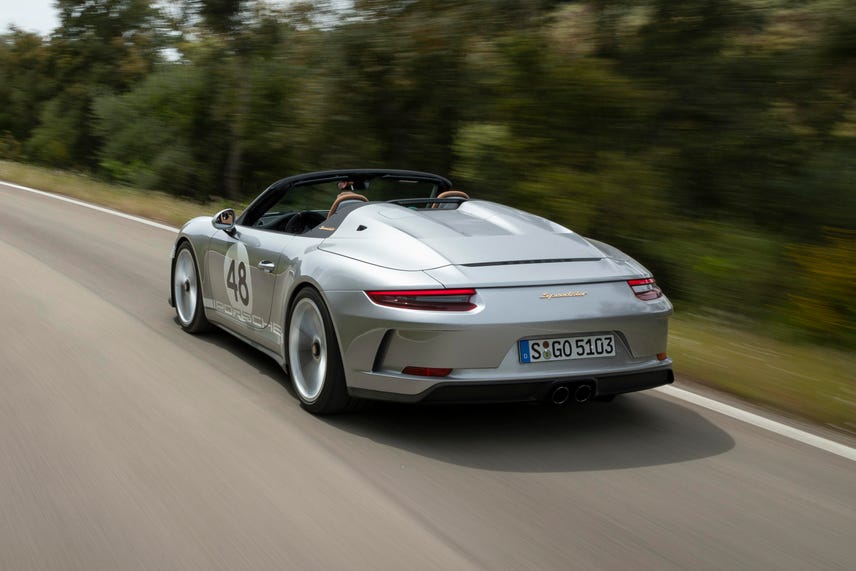 It's so often the way; the best drive is proving to be the one after the cameras stop rolling. Producer George Peck and I are on something of a mission to get the 2019 Porsche 911 Speedster back vaguely on time, and I am doing my best to shrink Sardinia. Fortunately the Italian island isn't riddled with motorways, so the most direct route is also proving to be a spectacularly good piece of road. Well surfaced, wide enough and winding through undulating terrain -- it is just wonderful. It's one of those drives that you get drawn into, gradually getting quicker and quicker as you get more and more comfortable with how the car's moving, how the tires are behaving.

And how is the 911 Speedster moving? Very much like a GT3 -- as you'd expect. Or rather, as you'd hope, because you never quite know what dynamic effect the removal of a roof will have on a car until you drive it.

Given the expertise housed within Porsche's GT cars department it would have been a surprise if the Speedster had emerged with the torsional stiffness of an uncooked wurst, but there's always the faint possibility. Fortunately my Speedster was parked on cobbles when I first got into it this morning, so within the first few feet of driving all worries had been banished. No sensations of shake, no feeling of flex. Even when, later in the day, the limited-slip differential was locked and the Speedster was sliding out of Sardinian switchbacks, the sense of precision and stability was everything you'd expect.

Not that all the sensations in the Speedster are quite the same as in a GT3. For starters, the suspension is very, very slightly softer. It uses the same springs but the dampers have been retuned because, like the 911 R, this is seen as car that will spend more time on the road than track. It really is a subtle difference, and wasn't overtly palpable until I started driving hard, but the fact that I found myself reaching for the sport button on the Porsche Active Suspension Management button -- something I wouldn't generally do on a normal GT3 -- confirms the slight skewing of the settings.

This road-bias is also the reason that the 21-inch wheels of the concept cars have been replaced with the normal 20-inch items from the GT3. (Same design, too, which I think is a bit of a shame. I like the design, I just think it would have been nice to see something different.) For reasons of practicality, a couple of other details from the two concept cars have also been quietly ditched, namely the small, pointy wing mirrors and the central fuel filler cap. The mirrors I understand, but I haven't seen anyone complaining about awkward fueling arrangements on Singers.

Nonetheless, there are some lovely visual details on the Speedster, particularly if you opt for the Heritage Pack that was fitted to our GT Silver test car. This includes touches like the gold lettering for the Speedster badges on the buttresses and bum. Look even more closely and you'll spot that the shields on the nose, wheels, etc., are all of the original 1948 design (think beautifully hand-drawn rather than laser-etched). Some of these shields can be found inside, too, along with the classic black and cognac color scheme for the trimmings. All in all, I think it adds a surprising amount to the overall aesthetic of the car and, without dropping too far down the passageway to pastiche, it makes clearer that this is a special car that Porsche designed to be a 70th birthday present to itself.

I'm speeding down short straight after short straight, all linked with a mixture of second-, third- and occasionally fourth-gear corners. Each straight provides just enough room to extend the 4.0-liter flat-six engine through one or two gears before leaning hard on the standard carbon-ceramic brakes. And with every straight I'm getting a little more confident that we might make it back on time...

Like the Touring, Speedsters are only available with a manual transmission, and that feels like the right decision for a couple of reasons. First, as I've already said, the Speedster is designed primarily with the road in mind, so slashing milliseconds from shift times isn't necessary. And yet, almost counterintuitively, the Speedster is designed to be a driver's car, and therefore there shouldn't be the opportunity to be auto-lazy like you might in a PDK-equipped 911 Cabriolet.

The sound of the naturally aspirated six-cylinder engine is glorious, and certainly gets the hairs on the back of your neck up out of their chairs, but it is not perhaps quite as all-encompassing as you might imagine. If you have the roof down, above a certain speed much of the mechanical music is whipped away in the slipstream. Initially I also had a suspicion that the addition, for the first time, of particulate filters to the exhaust might have marginally muffled the harder edges of the flat-six symphony. When I asked about this later, I was told that it wasn't, in fact, anything to do with the new exhaust (which Porsche has somehow managed to make 22 pounds lighter), but rather all to do with there being a roof on top of the engine, dampening some of the sounds that you would normally expect to hear.

There are a couple of numbers worth picking out of the spec sheet, too. The first is positive: 502 horsepower at 8,400 rpm, which, thanks to the addition of individual throttle bodies and even higher-pressure injectors, is a couple more ponies than a standard GT3. The second number is less positive: A curb weight of 3,230 pounds, which means that it weighs about 110 pounds more than a manual GT3. This is not enough to really lose sleep over, but it nonetheless seems a shame for a car that is meant to be a paragon of the pared back and a shining example of the stripped out.

But to focus on numbers is somehow to miss the point of this Speedster. This is all about bringing the emotional and visceral aspects of a roofless driving experience to a GT3. It is about sensations. Sensations like the increased appreciation of speed from a rushing slipstream. Sensations like the smells (good and bad!) of the landscape you're traveling through. Sensations that make a day spent in a Speedster with the roof down (the roof should really only be treated as a rain cover) more tiring, but arguably even more memorable than one spent in a fixed-roof GT3.

That drive after the cameras were off is certainly one that I won't forget. And yes, we made it back on time.