The McLaren Senna delivers mind-boggling speed without the violent sensations you'd expect from a race car that's only barely road-legal.

The rigmarole of putting on several layers of fireproof clothing, followed by a helmet and the marginally uncomfortable piece of carbon fiber that is a HANS device, puts you in a certain frame of mind. A focused, but slightly nervous frame of mind. Walking down a pit lane to a car that looks as serious and aggressively purposeful (some might just say ugly, but I'll go with brutal) as the McLaren Senna does nothing to change that mindset. Knowing that this is a car that produces 1,764 pounds of downforce at 155 miles per hour, and that those rear wheels have to deal with 789 horsepower, also does nothing to dispel those jangling nerves. 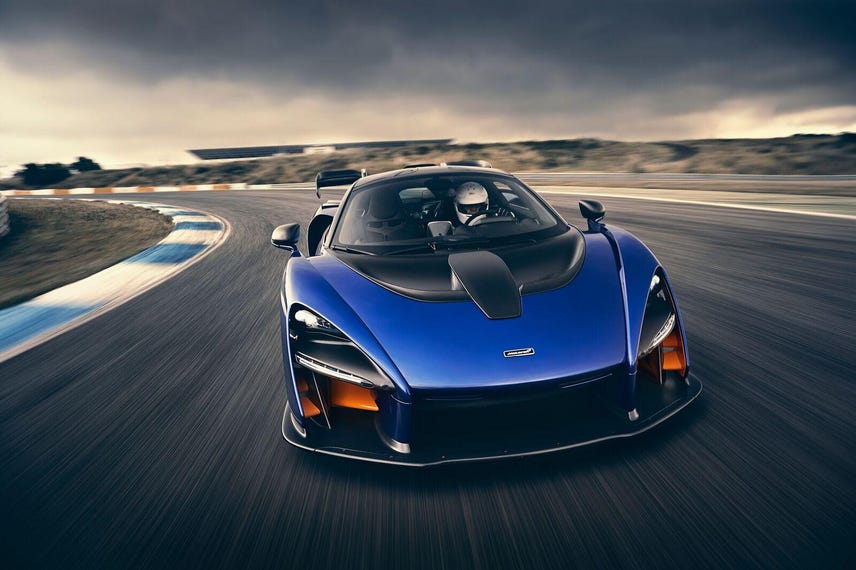 So, when I drive back into the pits 15 minutes later after my first few laps around the Autódromo do Estoril in the Senna, I'm a little confused. I'm not terrified and I don't feel like I've been trying to teach a bear to dance. The whole experience was remarkably... refined. Don't get me wrong, the car was certainly race car-fast (and I know that there is still more speed to come) but it wasn't mind-bogglingly noisy or recalcitrant or snappy or awkward like race cars can often be.

I rerun the laps in my head, trying to process it all. Pulling away from a standstill is easy. No juddering clutch to manage, just squeeze the throttle and let the familiar seven-speed dual-clutch transmission ease you into motion. It's happy crawling along the pit lane, too. Track cars at low speed can often feel like a teenager forced to attend a 50th birthday party, all uncomfortable and out of place. But the Senna is happy for you to short-shift and potter. No hint of 590 pound-feet of torque straining at the leash.

Visibility is wonderful, so the car feels instantly easy to place and the cockpit is far less cramped than the only previous Ultimate Series McLaren, the P1, where you rub shoulders with your passenger. Ease out of the pit lane exit, wary of cold tires and into the first bend. The steering is responsive but still smooth, and it's surprisingly lightly weighted. It certainly doesn't feel like you'd need to take up a gym membership to drive this car. Until, that is, you hit the brakes.

Having done some sighting laps in a 720S before getting into the Senna, this is the first big discrepancy in the control weightings. Apply the same pressure to the Senna's left-hand pedal as you would in the 720S and nothing really happens. This, finally, is something you'd expect in a race car. It is a really meaty, solid brake pedal and once up to temperature you can lean on the brakes as hard as you like with your right (or left) foot.

In fact it is the Senna's braking that really stands out in the memory and the thing that I really work on when I go back out for my second set of laps. The aero is so well managed that it makes the car feel wonderfully stable at high speed. The Turn 5 kink on the back straight is easy flat (unlike in the 720S) and the car feels totally unflustered. The acceleration is tremendous (0-186 mph in 18.8 seconds) but strangely, because the Senna is so well tied down from a suspension point of view and because you are held so tightly by your harness, it feels less remarkable than in the 720S, which squats and rolls and feels more remote.

But the braking, that's something else. It can brake 95 feet later into Turn 1 at Estoril than a 720S, and with a tailwind on the pit straight the Senna will hit over 180 mph before you hit the left pedal. The deceleration started just after the "200 meter" board, which I can tell you now took some building up to, because it's a downhill braking zone and initially my mind could not compute that sort of stopping distance without seeing an accident as the end result. I have never experienced braking like it in a road car. And the most impressive part is that there remains real feel through the pedal as you smash it with all your might, generating up to 2 G's of force in the process. The active aero also helps you enormously so that there's no tricky compensating modulation required as the speed comes off and the car remains stable.

You need to brake late and deep into corners to get the most out of the car, too, weighting up the front tires (bespoke Pirelli Trofeo Rs) and pressing them into the tarmac. Do this and you can feel the car begin to rotate around the front, opening up the corner, letting you get back on the power earlier. Personally I would like a wider front tire, just as I wanted a wider front tire on the P1. A 245-section front is pretty skinny and it means that through a corner where you can't trail-brake or through a long corner like the Turn 11 Parabolica at Estoril, you're left with a car that really only wants to push into understeer. I understand why McLaren has given it this balance because it makes the car more accessible and friendly at the limit, but equally it can feel frustrating in certain situations.

Not that the Senna won't oversteer if you want it to. The car was (at McLaren's insistence) in its Race ESP mode throughout the laps, but this wasn't in the least bit frustrating. It is supremely well judged to allow you plenty of slip while giving the confidence of an electronic safety net (albeit one with bigger holes). You might be able to chase the throttle a little more on the exit of some corners with ESP off but that's something to build up to, and out of Turns 3 and 9, I had some deliciously progressive slides that I could maintain and even change gear halfway through. No sweaty palms, no skipped heartbeats. Even the slightly bigger, faster, less intentional slide that I had on the off-camber exit of Turn 6 was easily caught.

The speed that the Senna generates is phenomenal. McLaren claims it is six seconds a lap faster around the relatively short Estoril circuit than a 720S. Six seconds! And, as we all know, a 720S is near as damn as fast as a P1. Yet I would wager that it would be less scary getting within a second of the Senna's ultimate lap time than within a second of the 720S's ultimate lap time. This brutalist looking, 789-horsepower monster makes race car performance seem accessible and almost friendly.

Curiously, after I stepped out of it, part of me was left almost underwhelmed, because aside from the performance there wasn't as much drama as I was expecting. It was easy to get into with the roof cutout and there's no FIA roll cage to clamber through. The noise from the turbocharged V8, admittedly muffled by a crash helmet, wasn't something to set your eardrums alight, and on the straights I found myself watching the shift lights rather than relying on some wailing crescendo. There was also no race car NVH buzzing up through the carbon chassis to the seat of my Nomex-clad backside. It was quite serene really. Almost unexciting. Almost.

And that's when I realized that I'd been approaching the Senna all wrong. All the talk and the buildup had made me think of this as a lightly civilized race car. But as soon as you remember that this is a road car -- a proper road car, not just a cursory one like a Radical or Ariel Atom -- it changes everything. When you consider the speed that you have just driven 'round the circuit and then remember that without any adjustment (other than the press of a button in the roof to release it from its ground-scraping race mode) you could drive it out into a city rush hour, that's when you appreciate the achievement of the Senna.

And no, I wasn't allowed to drive it on the road, so some of that is conjecture, but thanks to the vagaries of filming I spent quite some time in the car pottering around and driving slowly and doing three-point turns, so I'm pretty confident of that presumption. I also hope I get to confirm my suspicions by driving one on the road at some point, as I think it would be a spectacular sight.

Of course, if this has got you reaching for the number of your local McLaren dealer, ready to part with $1 million, then I'm afraid you're too late. All 500 Sennas are already sold. I just hope they have been bought by people who will drive them and drive them hard. That bodywork is made to cut through the air, not be stared at in a static collection.