The next iteration of McLaren's excellent Long Tail cars, the 600LT proves it's an animal all its own.

There is a fear that it might have been a one-off. A fluke. McLaren claims that the 600LT is the fourth LT, but really it's only the second.

The F1 GTR Long Tail might technically be the first LT, but it's a race car from back when the company was McLaren Cars not McLaren Automotive. That was an LT for purely aerodynamic reasons. The second and third LTs are much more pertinent to the 600LT, but are really one and the same as McLaren has just chosen to differentiate the 675LT Coupe from the almost identical 675LT Spyder. So, the new 600LT is really only the second LT and it is important because it will clarify what the LT sub-category is. What traits from the brilliant 675LT will we recognize in this new car? Will it have the same feel, interactivity and (that most un-McLaren of things) emotion? I certainly hope so. 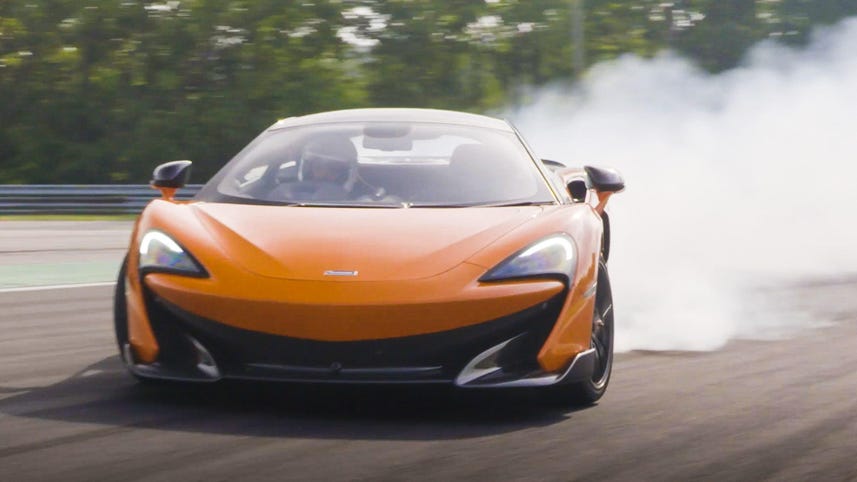 Given that I'm longing for things that are so much more than bald facts it seems almost wrong to begin by framing the 600LT in numbers, but they are interesting and give a solid idea of just how much this car has changed compared to a 570S. The power and torque increases are fairly small at 30 horsepower and 15 pound-feet and although the 0-62 mile-per-hour time of 2.9 seconds and 0-125-mph time of 8.2 seconds are both hugely impressive, the 220-pound reduction in weight is really of more importance to the LT ethos.

Admittedly that weight saving is with the car in an "optimum spec", but even if you choose to add back a couple pounds for the convenience of some storage and a few more so that you can listen to some music and be navigationally guided, the weight savings are still significant. Things like lightweight wishbones and uprights that save more than 20 pounds from the suspension and, when combined with a 37-pound saving on the wheels and tires, can have a very noticeable effect on the ride and handling. The spectacular top exit exhausts aren't just for theatrics, either (they spit blue flames in certain circumstances!), as they save 27 pounds over the standard system. It's worth mentioning that the car comes as standard with the sport bucket seats (46-pound saving) and not the super-lightweight seats from the Senna (which save an additional 8 pounds). Impressive as the Senna's seats are, I think I would actually stick with the already excellent sport seats as they are amongst my favorite perches and make getting in and out considerably easier.

Whatever you choose, the seating position is tremendous and the visibility as wonderfully liberating as we've now come to expect from McLaren. Trundling down the pit lane in the sunshine at the Hungaroring, Normal mode has been eschewed (although I do try it briefly later -- it's pretty much what you'd expect, everything is just muted a bit) and we've jumped straight in with Sport mode. The first thing you notice is the gear shift. It's hard not to because every upshift is accompanied by a loud crack from the exhausts behind and a jolt that is like an unexpected slap on the back from a drunk friend in a pub. Were I holding a pint, it would definitely have been spilled.

I try a couple more shifts at different revs with the same result. The sound from the ignition cut I like, but the overt jerkiness is not something I've found in a McLaren before and it actually reminds me of the Aventador's single-clutch gearbox, which is not a good thing. It's apparently because of some new Inertia Push technology that we've seen in other manufacturer's dual-clutch systems in the past but is a first in a McLaren. I'd actually worry about it unsettling the car if you shifted at the wrong moment on track, certainly in the wet. Thankfully the jolts disappear (or are at least greatly toned-down) if you turn the powertrain switch to Track, but the reports from the exhaust remain. Much better.

I move slowly through the first few corners just to get an impression of the steering -- the weighting feels fantastic. It's a pleasing reminder of the bit of extra oily heft that a hydraulically assisted system seems capable of compared to an electrically assisted rack. It should be lovely on the road.

Then it's time to up the pace. I've already done a few laps in a 570S to acclimatize to the wiles of the Hungaroring and hammering down the main straight for the first time in the 600 I hit the brakes where I had in the 570. The difference is incredible. For a start it is clear that I'm going to wipe off the necessary speed long before I need to, but it's also the way the rear end is behaving that is so different. The 570S feels like it has a lot of pitch under braking and as a result the tail tends to get very loose. I actually like that feeling, but it needs very careful managing. The 600LT with its 8-millimeter lower ride height, 34-percent stiffer springs at the rear (compared to 13-percent stiffer at the front) and greater toe on the rear wheels is so much more stable. You can still tip it into the corners nicely on the brakes and easily get the car rotating early, but it's so much more precisely controllable.

Relax the stability control to its dynamic setting and there is a fair amount of latitude to be had in the corners, but the nice thing is that the 600LT feels completely natural over the limit of grip. Whether it's bouncing over a high curb in fourth gear and feeling the car drift out to the exit or winding off a bit of lock as the rear slides away from you through the downhill left-hander that is Turn 2, the 600LT always gives you confidence. Some cars cause a spike in heart rate and a fleeting flash of panic when they lose grip, but the new LT doesn't because the progression from grip to slip is as seamless as walking from one room to another through an open doorway.

The tires surely play a big part in this. The 600LT wears bespoke Pirelli P Zero Trofeo R rubber that was developed alongside the car from the very start. The engineers apparently went through 80 iterations before they settled on the final version and the evidence is that it was work worth doing.

Under acceleration the 600LT will no doubt feel stunningly fast on the road, but on the track it feels perhaps the most unremarkable piece of the jigsaw. Such is the crazy world that sports cars now inhabit. What's important is that there is plenty of torque to adjust the car's balance but that torque is now delivered in a more linear fashion so, again, the transition into power oversteer feels nicely controllable.

My time on track in the McLaren was all too brief (just 12 laps) and we will have to wait a little while longer to try it on the road but, although I hesitate to give a definitive verdict, all the evidence is that the 600LT was no fluke. Braking hard into a bend, feeling the grip through the ball of a foot on the left-hand pedal, listening to the explosions activated by each pull of the left hand paddle and then toying with the car's balance into, through and out of a corner I could't help but smile. I suspect you would too. And that surely is the best metric by which to judge an LT.