Ford's largest SUV gets the Platinum treatment and a heaping helping of every luxury and amenity in the automaker's arsenal.

At 221.9 inches long, the 2019 Ford Expedition Max is about a foot longer than the standard Expedition SUV, making it one of the largest -- if not the largest -- non-commercial vehicles in Ford's fleet. And in top-of-the-line Platinum trim, the $84,000 example that recently rolled into Roadshow HQ is also one of Ford's most expensive.

The 2019 Ford Expedition's EcoBoost V6 and 10-speed transmission are a great combo, boasting strong torque delivery and smart gear selection. The Platinum trim level is loaded up with every tech bell and luxury whistle in Ford's portfolio and benefits from a horsepower bump.

Loaded for bear with every feature in Ford's arsenal, the 2019 Ford Expedition Max Platinum is so well-appointed that it could be considered a low-cost alternative to luxury heavy-hitters like the Navigator or Escalade.

It's so expensive because Platinum, in Ford parlance, means "every bell and every whistle." Choosing this trim level gets you every luxury and tech amenity in the Expedition's arsenal. There are even a few upgrades unique to the Platinum model, such as a significant power and torque bump.

That extra stretch on the outside pays off inside, with a huge helping of cargo space. The Expedition Max boasts 15 additional cubic feet of cargo space behind the second row compared to its shorter-wheelbase sibling, growing to 34.3 cubic feet total. Fold the last row flat to expand the hold to 73.3 total cubic feet.

Nine inches of the Expedition Max's additional length is within the wheelbase which should also free up more legroom on the second row, but not as much as you'd think. The third row is still sort of small, but I was able to fit my 5-foot, 10-inch frame fairly comfortably back there. However, anyone taller than I am probably won't have a pleasant ride in the way-back.

The geometry of the long wheelbase also slightly reduces the departure and breakover angles. There's less than a degree difference, but it's worth noting for folks who might want to venture off road.

Big Max boasts a slightly larger fuel tank (28.3 gallons vs. 23.3) which stretches this example's theoretical cruising range to about 595 miles (82 miles more). This is despite its 100 pounds of extra curb weight (5,793 pounds total) which causes a 1-mpg hit to the highway economy estimate.

Speaking of fuel economy, the "Eco" advantage is one of the primary reasons that Ford moved to the EcoBoost V6 engine as the primary option for the Expedition and Expedition Max for this generation. The 3.5-liter, twin-turbocharged V6 makes 375 horsepower and a healthy 470 pound-feet of torque, which is about 100 pound-feet more than the previous generation's Triton V8.

Opt for the Platinum trim, however, and output is raised to 400 horsepower and 480 pound-feet of torque, which is about 100 pound-feet more than the 2018 Chevrolet Suburban's 5.3L Ecotec V8 makes. You can go ahead and insert your own "replacement for displacement" cliché here.

On regular-grade gas, the EcoBoost is good for an EPA-estimated 17 miles per gallon city, 24 mpg highway and 20 mpg combined for the non-Max Expedition in the 4x2 configuration. My 4x4 Max Platinum steps down to 16 city, 21 highway and 18 combined. My week of testing averaged out to about 19 mpg -- in line with the estimates.

All of that torque flows through a 10-speed SelectShift automatic transmission on its way to the rear wheels, or to all four in 4x4 spec. In addition to four-wheel drive, my Expedition came equipped with a two-speed transfer case and Terrain Management software. Terrain Management is a set of drive mode presets that adjust the traction control, transmission, suspension and power delivery to maximize off-road performance on dirt, snow, rocks and sand.

Depending on the packages spec'd, the Expedition boasts a maximum 9,300 pounds of towing capacity in the standard-wheelbase, 4x2 configuration. My 4x4 Max steps down to an even 9,000 pounds, but that's still a lot, and the Expedition boasts a wide range of technologies aimed at making towing easier. My favorite is the Pro Trailer Backup Assist: a steering assist technology that allows drivers to control the swing of a trailer when reversing by using a steering knob on the dashboard.

I've already gone into detail regarding how this system works and a side-by-side towing comparison with the Expedition and a Chevrolet Suburban in my First Drive, which you can dig into here.

Ford Syncs up with Alexa

The Expedition comes standard with a solid load of cabin tech, starting with the now-familiar Sync 3 infotainment system in the dashboard. Here, it's as snappy and responsive as ever and the interface is even easier to navigate, spread out on the Expedition's large screen. (Though, it can be a bit of a stretch to actually reach that screen on the wide dashboard.)

This time around, Ford's suite of Sync apps is joined by new integrations with Amazon's Alexa service. A host of voice-activated Alexa "skills" enable everything from activating smart home features to playing Amazon Prime Music playlists. Ask Alexa to play 20 Questions on a road trip and it'll be happy to oblige.

Of course, Android Auto and Apple CarPlay are still standard on Sync 3, giving drivers a great way to bring their own Google, Waze and Apple Maps and a wide selection of audio streaming apps on the road. However, Ford's onboard navigation works rather well with a solid voice command system and live traffic updates.

Turn-by-turn directions, music and more are all played back via a 12-speaker B&O premium audio system. This is one of the first Ford vehicles to feature this system and it sounds pretty good with well-staged highs, clean bass and lots of volume. 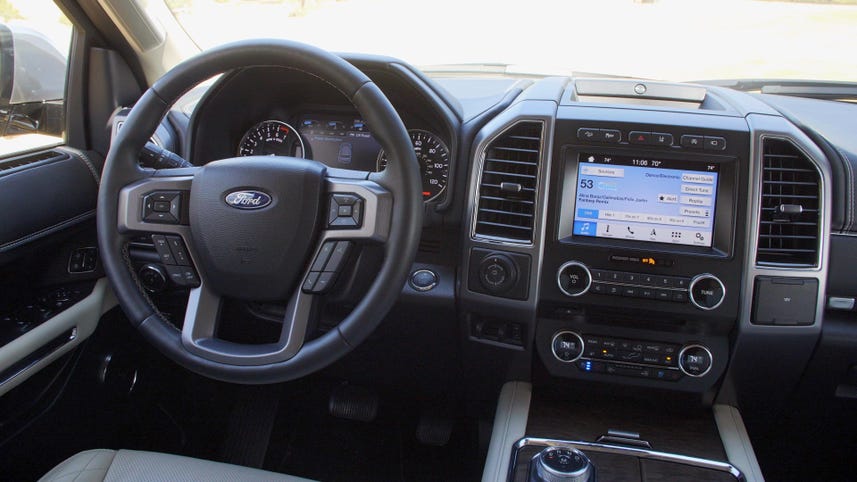 If that weren't enough, there's an optional rear seat entertainment system with a pair of headrest mounted displays with their own DVD readers, 4G LTE Wi-Fi hotspot functionality and a total of 15 cup holders. This is not a bad cabin to find oneself crammed into during a road trip.

Picking Platinum also makes every driver aid feature in the catalog standard. All of these features are available as options at lower trim levels, either à la carte or as part of packages.

That includes automatic high beam headlamps, adaptive cruise control with stop-and-go traffic assist, as well as a forward collision warning system with pedestrian detection and automatic emergency braking. On the highway, blind-spot monitoring and a lane departure warning system help to keep Big Max's considerable length in check. At lower speeds, the rear cross-traffic alert notified me of oncoming traffic while reversing and I got lots of use out of the Platinum model's standard 360-degree camera and proximity sensors.

I also found Ford's semi-automated parking assist system to be a huge help with tucking the massive SUV into San Francisco-sized parking spaces. With the touch of a button, this system can scan for parallel or perpendicular parking spaces and steer the Expedition into position while I, the driver, retained control of the accelerator and brakes. It even features a Park Out Assist function to help wiggle itself back out of tight spaces.

The 2019 Expedition XLT starts at $53,085 (including a $1,295 destination charge), but my Max Platinum model tops the line out at around $80,160. There aren't many options left to get at this trim level, but we're fully-loaded with the 4x4 upgrade, Towing package and more, bringing the as-tested price to $83,725. At that price and this well-equipped, you could consider the Expedition Max Platinum a solid low-cost alternative to the Lincoln Navigator or Cadillac Escalade -- perhaps not as cushy, but close enough for much less money.

However, if your ambitions are more modest, you could save a lot of money stepping down to the standard-wheelbase Limited 4x4 trim level ($65,800) and being pickier with the selected options. Out of the box, the Limited trim boasts a standard feature list that's still very well-equipped with many of the features that impressed most on the Platinum. A 301A package ($3,030) fills in the blanks, getting you most of the driver aid features that matter with one check box. I'd also add the Enhanced Active Park Assist for $400 more, bringing the price to a much more reasonable $69,935.

You might find yourself cross-shopping against the aging Toyota Sequoia and Nissan Armada, but I wouldn't -- both of these vehicles feel less modern than the EcoBoosted Expedition. The Expedition and Expedition Max compare most accurately and favorably against Chevrolet's Tahoe and Suburban and GMC's Yukon and Yukon XL. The GM quadruplets are better sellers, but I'd argue that this new Ford is a better SUV with a fantastic 10-speed powertrain, solid cabin, driver aid tech and smart features (like the Pro Trailer Assist) that make living with a big ol' SUV much easier.