Though it's less practical than its X3 sibling, and not as engaging to drive as we'd like, there are still many reasons to recommend the BMW X4.

We at Roadshow like to moan about coupe-styled crossovers -- we call them by the portmanteau coupeovers -- because they're an awkward compromise. But the fact is that car shoppers love the things, going crazy over SUVs that offer a bit less utility in order to give off the visual appearance of having some more sportiness.

A technology-laden cabin and a powerful turbo-four engine.

Though not our first pick in the segment, the X4 deserves high marks among compact luxury crossovers.

Enter the 2019 BMW X4, the second generation of this nameplate. It's based on the well-known X3 crossover but with a sloping roofline that's intended to give it a sleeker appearance. Is it luxurious and sporty enough for drivers to overlook its unconventional shape, or is the X4's appeal hard to fathom?

The 2019 BMW X4 puts design ahead of practicality

Seen in profile, the BMW X4's sloping roofline and shallow-angle rear window are clearly evident. About 2 inches lower in height but 2 inches longer in length than an X3, the X4 somehow doesn't have a cohesive design, looking bloated and ungainly from many angles. Note, for instance, the tall and wide nose, the awkward aerodynamics pods at the top of the liftgate, the very high beltline. Worse yet, there's no rear wiper, meaning your view rearward is regularly obscured by raindrops, dirt and grime.

To be fair, the X4 is far from ugly, what with its tidy lines and creases. Dressed up here with Dark Graphite Metallic paint, 19-inch wheels and a bright-red leather interior, it definitely has curb appeal. It's just that the X3 is far more pleasing to the eye.

The next point of comparison against the X3 concerns cargo room, where the BMW X4 again loses out. At first blush as the power liftgate rises, its cargo area looks roomy, but that's before considering that the sloping rear window means you can't stack things too high. As a result, you get 18.5 cubic feet of storage behind the rear seats, about 10 cubic feet less than in an X3. Folding the seats down is easy and permits carrying much larger, bulkier objects -- but, again, the X4's max cargo capacity of 50.5 cubic feet trails the X3's 62.7 cubic feet.

If there's one place you don't really make any sacrifices, it's the back seat. Despite that sloping roofline, there's enough headroom that adults can sit upright without issue.

Luxurious but lazy on the road

As a daily driver in the luxury segment, the BMW X4 makes a strong first impression. Its cabin is nearly devoid of road, wind or engine noise. Its eight-speed automatic transmission shifts without much fuss at all. The 19-inch wheels roll over cracked pavement smoothly, too, transmitting only modest amounts of bumping to occupants. It's a calm and chilled-out vehicle to drive over long distances.

It's quite easy to match the EPA fuel economy estimates of 22 miles per gallon city and 29 miles per gallon highway, too. The engine stop-start function is about average in the smoothness of its operation; it can easily be turned off at the push of a switch. All-wheel drive is included as standard, a nod to customers' expectations that crossovers are ready for inclement weather (and a nice upgrade over the X3, which comes standard with rear-wheel drive.)

Where the X4 starts to let down its driver is in its reluctance to get up and go, which is all the more frustrating given that its 2.0-liter turbo four-cylinder engine is rated for a competitive 248 horsepower and 258 pound-feet of torque. Too often when pulling away from a suburban stop sign, merging with traffic or passing other motorists, the BMW takes an age to actually deliver any power. It's a compound effect of a dull throttle response in Comfort mode (Eco Pro is worse, Sport is better), a transmission that likes to hold higher gear ratios and a turbo engine with noticeable amounts of lag. Sometimes I felt like it took a full second or more for the X4 to give me any power even when I gave it half-throttle away from a stop.

The X4 also isn't particularly involving to drive, with muted steering feel and an uninspiring chassis. That's a complaint we've levied at many a modern BMW, not because we have a gripe against the brand but because the cars simply don't drive with the same sparkle as their rivals. The X4 does, indeed, grip plenty and handle corners with aplomb -- it just does little to communicate with or excite the driver while doing so. Enthusiast drivers would be better served, of course, by the available 355-horsepower X4 M40i rather than my more mainstream xDrive30i tester.

Like most of BMW's newest models, the X4 has a top-notch infotainment system. In this car, it's a 10.25-inch touchscreen mounted atop the dashboard, with BMW's familiar rotary jog controller still present on the center console. Although the touch functionality is great for pinch-and-zoom operations on maps, I find myself using the control knob more often because it's simpler to do while driving. You also get physical shortcuts to jump to, say, phone or media settings. 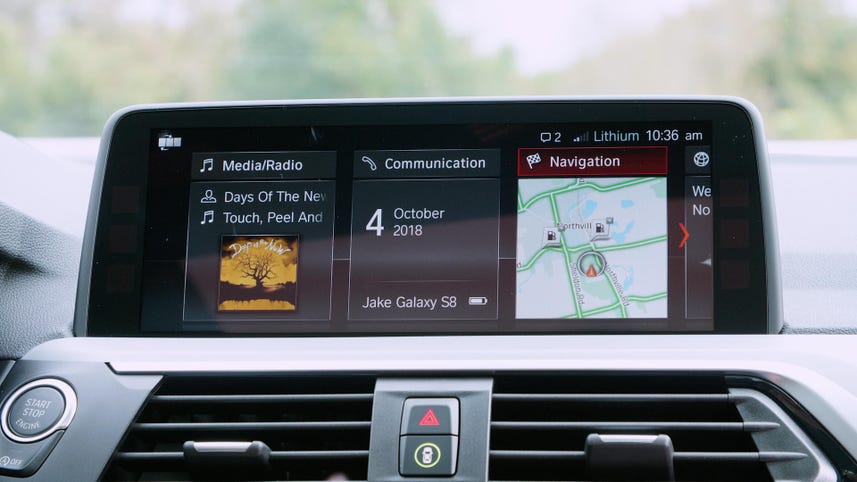 All told, the system's iDrive software loads and responds quickly, and has a straightforward menu layout that anyone can learn to use in a few minutes' time. CarPlay is supported, but as with other new BMWs, you pay a subscription fee to keep using it after the first year. That's frustrating when so many rival cars -- and many much more affordable cars at that -- include CarPlay for free. Android Auto support remains unavailable.

The system also has gesture controls, which are a fun gimmick to show off when your friends are in the car. Twirl your finger in midair to adjust volume, swipe your hand left to deny an incoming phone call or poke two fingers toward the dash to activate a shortcut like, say, navigating to your home address. With voice recognition, a touchscreen and the rotary controller, though, it's hard to see the value in using these features once the novelty wears off.

All the car's other technologies work well, from the Wi-Fi hotspot and wireless phone charging pad to the bright, color head-up display. The optional 360-degree parking camera, part of a $700 option pack, has a neat trick: Tap the screen to get a virtual look at the X4 from an outside perspective (Audi and Toyota have similar features on some models). My test car was equipped with safety features like precollision warning and braking, blind-spot monitoring and lane-departure warning, thanks to the $500 Driving Assistance package; upgrading to the Driving Assistance Plus package would have added adaptive cruise control and active lane-keeping.

Were I shopping the BMW X4 range, I'd be pretty tempted to skip this xDrive30i model and upgrade to the sporty M40i. I took a quick spin in one a few weeks ago, and I'd pick it for its more bulked-up body styling, 355-horsepower engine and sharper handling. That said, it costs more and returns worse fuel economy.

The regular 2019 BMW X4 starts at $50,450 before destination, with my tester ringing in at $57,895. (The closest rival, a Mercedes-Benz GLC 300 4Matic Coupe, starts a bit cheaper at $47,300.) If I got to start from scratch, though, I'd equip my X4 xDrive30i for daily-driver duty as follows: the M Sport Design package for sportier styling, and the Executive Tier option pack for goodies like the 360-degree camera, heated seats and LED headlights. I'd also add both the Driving Assistance and Driving Assistance Plus packages, and the optional $875 surround-sound audio system. Total price: $62,640. Yikes.

On a purely practical basis, I'd have to recommend that luxury-crossover shoppers consider the BMW X3 for its objectively lower price, objectively greater interior room and subjectively more handsome design. Yet there's a lot to like about the 2019 BMW X4, from a technology-laden cabin to a quiet, comfortable driving experience. It's a style-focused luxury crossover, and if its unique look appeals to you, you won't go wrong buying the X4.