For driving enthusiasts, it's easy to assume that the continued proliferation of crossovers means the end of fun-to-drive sporting vehicles. BMW, among others, is proving that not to be the case by injecting many of its newest models with lots of horsepower and sporty handling. Take, for instance, the 2019 BMW X2 M35i. Where the regular X2's ambitions begin and end in the suburbs, the M35i variant feels like it's aching to be unleashed on a mountain switchback.

The unforgiving ride won't suit everybody.

Among small luxury crossovers, this is the driving enthusiast's choice.
Watch this: Five things you need to know about the 2019 BMW X2 M35i
06:16 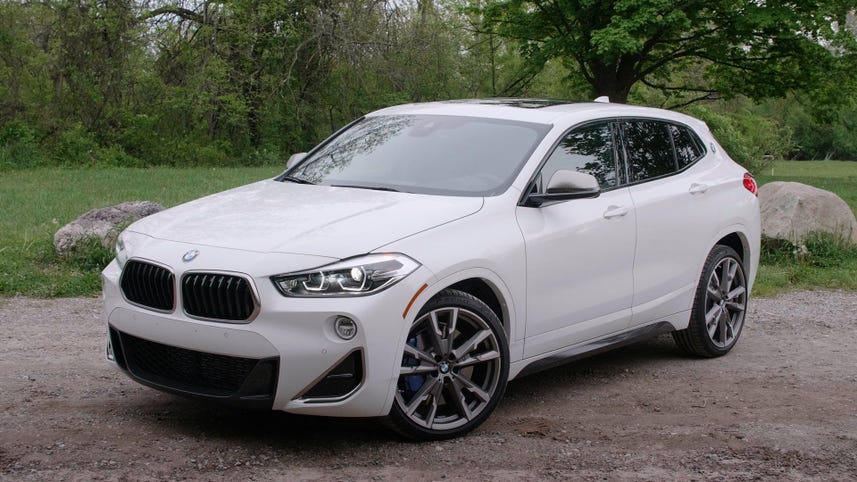 Much of that sensation comes from the B48 turbocharged four-cylinder engine. It delivers 302 horsepower and 332 pound-feet of torque, fairly prolific figures for just 2.0 liters of displacement, and a whole lot beefier than the standard X2's 228 hp. Standard all-wheel drive and an eight-speed automatic transmission are the helping hands that get the M35i to 60 miles per hour in a claimed 4.9 seconds.

As is the case with just about all BMW engines in recent memory, the numbers don't do this mill justice. It feels like it has power and torque in reserve all across the rev range, with effortless torque and only the faintest whiff of turbo lag. Put the drive-mode button and transmission shifter into their respective Sport settings for serious hustle. Gear changes come briskly and often, and the M35i builds speed without pause on an instant's notice. Better still, the engine growls and snarls like the best hot hatches; comparisons to the soundtrack of a Ford Focus RS or Volkswagen Golf R are not unmerited.

It's around town, however, that this powertrain can feel a little laggardly, which has also been an issue with several recent BMWs. In situations when you don't quite come to a complete stop -- yield signs, roundabouts, awkward merges -- the computer seems to need to hold a committee meeting before granting a downshift and some turbo boost. As a result, in suburban driving the M35i needs quite a lot of throttle and some patience to get a move on.

At least the high-power engine isn't too thirsty compared with the standard X2. Where the base sDrive28i model is rated at 23 miles per gallon city and 32 mpg highway, and the all-wheel-drive xDrive28i returns 21/31, the M35i's EPA figures of 23/29 seem quite good. That doesn't seem like much of a penalty at all for an extra 74 hp.

Adding more horsepower is fine, but what makes a car "fun" is having a chassis that can control and take advantage of that power. The M35i delivers in spades, serving up loads of grip and plenty of enthusiasm for quick direction changes. Powering out of corners, the X2 does feel like it's based on a front-wheel-drive platform, even with standard all-wheel drive and an electronically locking differential. But the BMW still has the type of handling verve that encourages its driver to take that on-ramp just a bit faster next time.

The suspension, lower and stiffer than the regular X2's, keeps body roll and pitch to a minimum, while the quicker steering and sticky Pirelli P Zero rubber allow for decisive turn-in. The brakes are enlarged, too, and deliver both a firm pedal feel and right-now stopping force.

No good deed goes unpunished, and in the M35i that punishment comes in the form of unforgiving ride quality. On roads slow or fast, smooth or cratered, the BMW fidgets and skips constantly, recalling the less-than-compliant ride of something like a Focus RS. Of course, my test car wears optional 20-inch wheels with very low-profile tires, and it's possible the stock 19-inch wheels might soften things up a little bit. Suffice it to say, though, a comfy ride this car is not.

Even before you get behind the wheel, the X2 M35i looks a whole lot sportier than the standard model. Where the regular X2 has black lower body cladding and a 10-millimeter (0.4-inch) higher ride height, the M35i's side skirts and front fascia are painted body-color. As a result, this version looks far more hunkered down to the road. Add in the fantastic (albeit ride-quality-ruining) 20-inch wheels, and the result is a crossover that gives off more of a squat hot-hatch vibe. Nonetheless, I still can't quite get behind the giant roundel badges on this vehicle's rear pillars.

Inside, my tester is doused in eye-searing red, thanks to a $1,450 Magma Red Dakota leather option pack. It's a bold look, to put it lightly, so I'd recommend skipping the option and sticking with black. Still, the rest of the cabin is nicely finished, with familiar switches, dials and materials from other new BMWs. Sporty touches include an M Sport-specific steering wheel and optional bolstered seats. Though for the money (I'll touch on that later), extra flair like, say, alloy pedals or carbon-fiber trim wouldn't go amiss.

The M35i can be equipped with all the gadgetry you'd expect from a modern luxury crossover, with things like push-button start, adaptive cruise control, a giant sunroof, heated seats and powered lumbar support. Despite the big rear pillars and short rear window, visibility rearward isn't notably bad. (Or perhaps I've just gotten used to ever-tinier windows on coupe-styled crossovers…)

Cargo capacity is reasonable at 21.6 cubic feet with the seats up and 50 with them down. That's a little less than in the BMW X1, but honestly, the cargo area is plenty spacious and most shoppers won't struggle to fit their belongings in back.

For infotainment, the X2 M35i uses an 8.8-inch touchscreen running BMW's iDrive 6 software. The system is familiar from many other BMWs -- though the newest models, like the 8 Series and 3 Series, now use iDrive 7 -- and is as easy to use here as anywhere else. There's a supplemental rotary controller on the center console, with shortcut buttons to functions like navigation and media, as well as a row of presets on the center stack that can be used for anything at all, whether that's a radio station, phone number or navigation address.

Built-in features include AM/FM and satellite radio and navigation. There's a CD player but no auxiliary input port; as to USB ports, you'll find a traditional Type A up front and a Type C in the center console compartment, plus two more Type Cs for rear-seat passengers. The infotainment system supports wireless Apple CarPlay, though you'll have to pay a subscription to use the feature after the first year of ownership, and Android Auto is unavailable. Wireless phone charging, a Wi-Fi hotspot and an upgraded Harman Kardon sound system are available as options.

Active-safety technology is in abundance; my tester is equipped with precollision warning and braking, lane-departure warning, automatic high beams and parking sensors. Adaptive cruise control is part of a $1,000 option group. The only real demerit: No version of the BMW X2 (or X1, for that matter) can be equipped with blind-spot monitoring.

Aside from skipping the aforementioned Magma Red Dakota leather, I'd probably equip my own 2019 BMW X2 M35i just the way this test car showed up. It's quite well equipped but not overly laden with goodies to bump up the price unnecessarily. The car's base price is $47,445 (including destination), an upcharge of $8,050 versus the X2 xDrive28i. To that my test car adds $1,450 for the red interior, $1,800 for the Premium package, $600 for the 20-inch wheels, $1,350 for a moonroof, $1,000 for adaptive cruise with stop-and-go, $875 for the Harman Kardon sound system and $500 for the M Sport front seats. That brings the total to a tidy $55,020 -- certainly a lot more than genuine hot hatches, but in the grand scheme of performance luxury crossovers, not an enormous sum.

The 2019 BMW X2 M35i really is great fun to drive, and because it's a crossover, well, it's still a rather useful everyday vehicle, too. It impresses because it's not just a crossover with extra horsepower, but one with the handling chops to use all that power. And compared with, say, a 2 Series coupe, the X2 package is more useful for transporting stuff and people. It turns out that the arrival of droves of crossovers is no disaster at all.