2016 Ford Focus RS review: Hottest of hot hatches is worth the wait

Ford has a long history of keeping its hottest cars available only beyond the US. Finally the RS is here, and it's good.

Finally, this one's for us. Ford has been making hotted-up versions of its compact cars for decades, teasing American buyers with machines like the Escort RS and RS Cosworth. They were fast, they were affordable and none of them were available in the US.

Ride quality leaves a little to be desired when just cruising.

For this money, you won't find a better hot hatch in the US.

That changes now. This is the $36,000 Focus RS, the fastest RS ever to wear a blue oval on the nose and perhaps the hottest of hot hatches on the market today. It's fast, no doubt about that, but what about the rest? Let's dive in and find out.

Powering around the track

The heart of the Focus RS is a 2.3-liter inline four-cylinder engine making a nicely symmetrical 350 horsepower and 350 pound-feet of torque. Also symmetrical? How that power gets through the ground. After a trip through a six-speed manual transmission (there's no auto or DCT available on Focus), the torque is routed to all four wheels via an advanced AWD system.

A central differential directs more power to the rear wheels than the front, providing a lively feel, while clutch-type differentials at either end vector torque from left to right as well. In other words, the car can send its power where it wants to ensure great handling.

On the road, and even more so on the track, this results in a car that reacts differently than what you might be expecting -- at least, it was certainly different from what I was expecting. I've spent a lot of time driving Subarus and Audis and other AWD powerhouses, and of course the prevailing trend is to understeer wide when pushed.

The Focus RS, however, has an eager, direct response when driven hard. Yes, it too will wallow in understeer if you get into the corner too hot, but it's never of the terminal sort. Simple, light corrections get the nose headed in the right direction, and when flirting with the limit the car is just as responsive to adjustments made with your right foot as those made with your hands on the wheel.

This is helped by a suspension that's well stiffer than even the Focus ST, with two-way adaptive dampers situated on all four corners. On their standard stiffness the car is, indeed, quite stiff. Toggle into track mode and they get even more resistant to movement, adding even more sharpness to the feel of the car.

Yes, this is a tall hatchback and with a fair bit of body roll through the corners, but the feel is still legitimately, remarkably good.

I would be remiss if I didn't at least mention the Focus RS's Drift Mode, though I confess I think it's more of a gimmick than a good way for Ford's engineers to spend their time. That said, there is a bit of a method to their madness.

Set the car in drift mode and disable the traction control and the car does feel immediately different -- different, but in a decidedly bad way. The suspension moves to its softest setting, so the RS flops about more than usual, and power sent to the rear wheels is set to maximum. This results in a car that feels very, very unstable: perfect for drifting.

Watch this: How to scare your mother in a Ford Focus RS
05:59 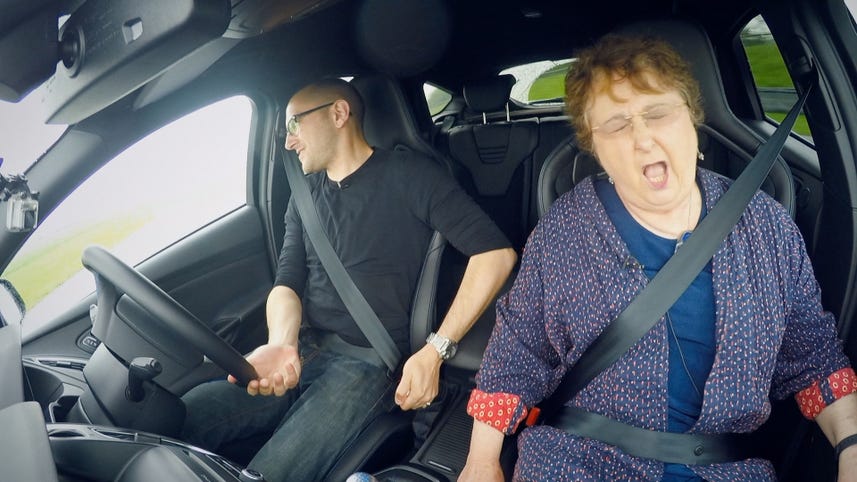 How to scare your mother in a Ford Focus RS
5:59
Watch Now

Softer suspension means you can more easily overload the outside tires and enter into a slide, but that doesn't mean you'll immediately be smoking all four like a Formula Drift professional. There's still an awful amount of grip to overcome, and doing so still requires an awful lot of provocation. But yes, it will drift, and pull off some remarkable donuts too.

So the car is great on the track and when really pushing through the twisties on the street. To enable that kind of performance, some compromises were made on the road. Biggest among them is ride quality. While comfort here is miles and miles ahead of competitors like the Subaru WRX STI and the now dearly departed Mitsubishi Lancer Evolution, that stiff suspension combined with those low-profile tires on 19-inch wheels conspire to make this a car that can be a little punishing on bumpier roads. However, if that's the price one has to pay for handling this good, then it's one I'm more than willing to meet.

Seats themselves are a fair bit sportier than the standard Focus units, not only looking pretty good but offering plenty of bolstering. They're also quite comfortable, though I can't help wishing they could be dropped closer to the floor. I constantly felt perched up on high, accentuating that sensation of body roll on the track.

Interior materials are a mixed bag. The RS sees a number of sportier touches, like Alcantara on the seats and steering wheel, plus a little boost gauge stuck atop the dash. The rest of the cabin is very much a Focus, with a lot of rubber and plastic within easy reach.

The highlight, though, is Ford's latest Sync infotainment system. Sync 3 is a huge upgrade over MyFord Touch and various iterations before, offering intuitive use and responsive performance. The only drag is that the version put in the 2016 Focus RS doesn't support Android Auto and Apple CarPlay. The 2017 version should, however.

Space behind the split rear seats is generous, but fold them down and you'll have plenty of room to pack for the longest of road trips, though with only 19 mpg in the city and 25 on the highway, you'll be stopping a lot. Still, when it comes to the ratio between performance and practicality, the Focus RS is unmatched.

The two biggest competitors to the Focus RS in the American market sadly aren't available as hatchbacks: Subaru's latest STI and Mitsubishi's last Lancer Evolution. While the Evo is a more focused machine, the RS is faster and far more practical. It's also more comfortable than either of those two. Given the Lancer costs about the same, and the Subaru isn't much cheaper, this is an easy choice.

The biggest competition the Focus RS is likely to face isn't out yet, and that's the Civic Type R. With only front-wheel drive, the Type R is unlikely to match the RS for pace in inclement conditions, but we're expecting it'll weigh substantially less and could very well be quicker around a circuit. We can't wait to find out when it finally comes out next year.

The hot hatch to get

While it was a long, painful wait, the Focus RS was well worth it. This isn't a perfect car, and at a starting price of $36,000 there's a serious $10,000 premium over the also-great Focus ST. Given the extra power and performance, it's worth every single penny.