On the surface, ProPilot Assist looks like standard lane-keeping steering assist, but this system has a backup plan that protects drowsy or incapacitated drivers.

The Nissan Rogue was already a strong contender before last year's overhaul, which added a new look, new amenities and tech, elevating the compact SUV to its current position of "best-selling" model in Nissan's lineup. Now, just one model year later, the 2018 model has received yet another significant update, bringing even more safety in the form of the automaker's ProPilot Assist driver aid technology.

The stated fuel economy is at the lower end of the class.

The 2018 Nissan Rogue finally gains the edge that it needs to stand out in the crowded compact SUV segment with new and unique driver aid technology to match its solid set of amenities.

However, while I can understand the Rogue's mass appeal and see why it's such a strong seller, I've struggled when recommending even the new 2017 model; it's a solid ride but has done little to make it stand out over competing compact SUV models with better dashboard tech or driving dynamics. Will the new safety tech upgrade provide the Rogue with the edge it needs? I hit the road in a 2018 Nissan Rogue SL AWD to find out.

First, let's find out what all of the fuss is about and take a look at the SL Platinum package's new ProPilot Assist system.

In a nutshell, ProPilot Assist is a combination of an adaptive cruise control system, lane-keeping steering assist and a driver alertness monitor into one simple feature that can be activated in just two quick taps. Simply hit the blue "force field" button on the steering wheel and set your desired speed and the aid system goes to work, keeping a safe following distance behind a leading car and adding steering aid to help keep the Rogue from drifting out of its lane.

The steering assist is interesting, you can feel it working through the steering wheel while driving, nudging here and there to help keep the car centered in the lane. The assist sort of feels similar to when a car follows a deeply rutted road, but it never feels overwhelming and the slight resistance was easy to overcome if I needed to quickly evade an object. The driver's intentions are always prioritized over the assist.

ProPilot Assist is designed to work at highway speeds, but its adaptive cruise element can bring the car to a complete stop, so you can make use of it in stop-and-go traffic.

However, ProPilot Assist is not an autonomous driving system -- though it does offer some semiautonomous features that we'll get to shortly -- and Nissan seems to have gone out of its way to educate the press and its drivers to not treat it as such. Like all modern ADAS, this technology relies on having a human in control at all times.

Watch this: Take an assisted ride with Nissan ProPilot tech on 2018 Rogue
02:57 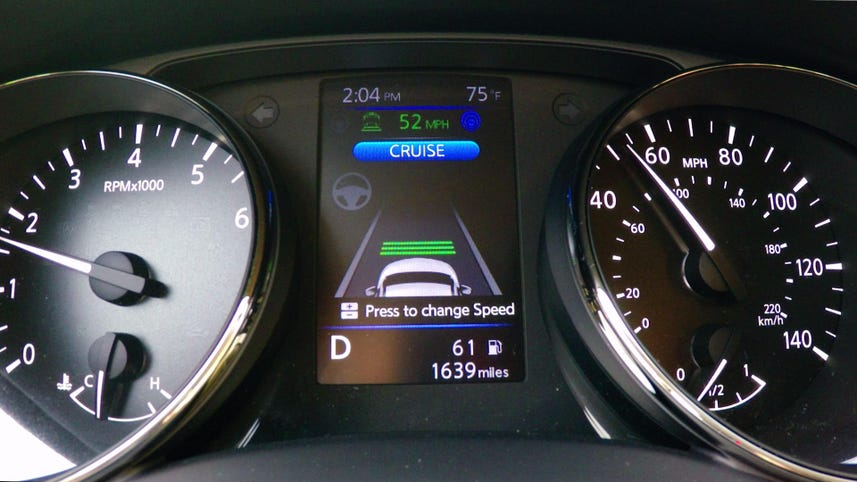 ProPilot Assist displayed some interesting behaviors when I ignored Nissan's warning and attempted to go hands-off. Depending on how straight the road was, I'd receive audible and visual warnings after just a few moments. Let's pretend I'm a very distracted driver or I've fallen asleep at the wheel and continue to ignore the system. Next, the Rogue would briefly, but sharply, tap the brakes to shake my attention back to the road ahead. I'll be honest, it was hard to not grab the wheel at this point, but I refrained just a bit longer. At this point, the system will assume that the drive has been incapacitated and activate the vehicle's hazard lights and attempt to safely bring the Rogue to a stop in its lane.

Personally, I think the way ProPilot Assist responds to this simulation of an incapacitated driver is what makes it stand out from other ADAS offerings at this class/price. Every other system I've tested short of the top luxury offerings just shuts off when it detects that the driver's hands have left the wheel, which could create an unsafe situation if that driver has dozed off or had a seizure. Nissan's system isn't smart enough to pull to the shoulder, but at least it won't send you flying off a cliff.

A 7-inch display audio system is now standard equipment for the 2018 Rogue, up from the 5-inch rig from last year. Also new for 2018 is standard Apple CarPlay and Android Auto smartphone integration, as well as Nissan's own handful of NissanConnect app integrations including Pandora, iHeartRadio and Facebook.

Our example was a top-trim SL model that steps up to an upgraded 7-inch NissanConnect infotainment system that adds decent navigation software with voice recognition. There's also the ability to search for destinations online via Google when connected to the automaker's own smartphone app. Historically, tech hasn't been the Rogue's strong suit, but the addition of Android and Apple software to the mix goes a long way toward gaining parity with the competition.

Along with the infotainment features, we're also packing premium Bose audio and Nissan's Around-View camera system, which stitches feeds from four cameras mounted around the Rogue Hybrid into one 360-degree view of the area around the car. With motion-detection software, the cameras can also audibly alert drivers if they get too close to a person or pet.

This is in addition to the standard S trim-level equipment that the Rogue rolls off of the line with, including blind-spot monitoring, rear cross-traffic alerts and forward precollision alerts with automatic emergency braking and pedestrian detection.

Our Rogue SL was the highest trim level, which adds leather trim and automatic high beams and makes many options available in lower-trim packages into standard features. I was treated to a heated steering wheel and heated front seats on cool mornings and aided in loading cargo by a power opening and closing rear liftgate with hands-free kick-to-open access.

In that rear storage area, I was also able to check out the new Divide-N-Hide cargo system, which was missing from the Rogue Hybrid I tested earlier this year. Annoying in name, but clever in operation, the system consists of a pair of panels and a series of channels molded into the wall of the rear hatch that work together to create a variety of configurations for managing your junk.

In one configuration, there's a tall vertical space with a small hidden underfloor area. In another, there are multiple shelves for organizing small items. Yet a third keeps things from rolling forward when the second row seats are folded flat. All in all, there are about a half-dozen storage modes to choose from.

You can check out our video review to see a few of the configurations in action.

Under the hood, the Rogue features a naturally aspirated 2.5-liter four-cylinder engine making a respectable 170 horsepower and 175 pound-feet of torque. That torque reaches the front wheels via the standard Xtronic continuously variable transmission (CVT) unless equipped with an optional on-demand all-wheel drive (AWD) system like our example's. AWD models feature an ability to lock in to full-time four-wheel drive, which comes in handy in snowy or icy conditions, but doesn't transform the Rogue into any sort of rock crawler.

Meanwhile, the SUV also features Sport and Eco drive programs that alter the transmission shift points and the throttle mapping. The difference between these and the standard drive mode is nowhere near as pronounced as I observed on the Hybrid model earlier this year, but there is a noticeable difference in the Rogue's character.

Our Rogue SL AWD received a 27 mpg combined estimate from the EPA, which breaks down to 32 mpg on the highway and 25 city mpg. In the real world, I averaged 25.6 mpg, which is acceptable, but not particularly impressive among the Rogue's peers.

The 2018 Nissan Rogue starts at $24,680, coming fairly nicely equipped with the new Android Auto- and Apple CarPlay-enabled NissanConnect receiver, as well as decent power and efficiency. Our SL AWD model was pretty much fully loaded, testing at $36,625.

At that price and in this compact SUV class, the Rogue continues to face stiff competition and, for the most part, still sits in the middle of the pack. Honda's CR-V is more efficient and competes closely on cabin tech. Mazda's CX-5 offers better driving dynamics, but worse tech. Meanwhile, the Rogue continues to increase its advantages over competition from Toyota, Ford and Volkswagen. By stepping up its game with new NissanConnect dashboard tech, more amenities and the unique ProPilot Assist safety system, I think that the Rogue has finally found the edge that it needs to stand out from the crowd.