Despite being nearly a decade old, VW will keep the first-generation Tiguan around alongside a new model launching later this year. Find out how the aging SUV stacks up against its now much younger competition.

Recently, Volkswagen debuted a new, larger Tiguan for the American market. The long-wheelbase model will boast an improved interior design, better legroom on the second row and more cargo space. It's a good looking ride and we're all very excited for its arrival.

Low fuel economy and a thirst for premium gasoline cut into the Tiguan's value. No advanced driver aid or safety technologies beyond a standard rear camera are available.

The 2017 Volkswagen Tiguan still makes a good first impression, but closer inspection reveals just how much this aging SUV lags behind the younger, more fully featured and fuel-efficient competition.

Now, the 2017 Tiguan S that arrived at Roadshow HQ this week is not that car. It turns out Volkswagen will continue to sell the older, smaller current Tiguan model alongside the new hotness because... well because reasons.

With that in mind, I hopped behind the wheel of the 2017 Volkswagen Tiguan S 2.0T to see how to old Tiggy holds up against its much younger competition.

Why are you still here?

It's hard to believe that the Volkswagen Tiguan -- still, technically, in its first generation -- has persisted practically unchanged for nearly a decade, but that's the reality.

Still, the old girl feels pretty spacious on the inside. Its 119.2 cubic feet of interior volume won't win any capaciousness contests, but the Tiguan uses what space it has well. I had plenty of head and legroom when I tucked my 5-foot, 9-inch frame into the second row for bit and there's a decent amount (23.8 cubic feet) of cargo room. Filling both rows with 6-foot-plus passengers could begin to present a legroom issue, a problem that the upcoming larger model may solve with its longer wheelbase.

The exterior got a refresh back in 2011 that has aged well, but this 2017 model's interior is really starting to look dated, especially when compared what new model will be bringing to showrooms in a few months. Fortunately, VW's understated design is what I like to call "timelessly boring" so it may never actually cross the threshold into full-on outdated without a side-by-side comparison to the new hotness. As it, it toes the line between understated and economy.

Most likely, the reason that VW is keeping the smaller Tiguan around is to serve as a lower cost option for those who can't or won't swallow what will undoubtedly be a higher entry point for the larger, more fully featured 2018 long-wheelbase model. Today, the 2017 Tiguan S 2.0T starts at $24,995 before a $860 destination charge nudged our as-tested price just over the $25k mark.

The Tiguan's cabin is starting to show its age, but the tech in the dashboard still manages to feel update and push a lot of the right buttons.

Our base level, no options 2.0T S model rolled into our garage with a 6.3-inch color touch display in the dashboard. The display also features proximity tech that uses infrared sensors to detect when a hand is approaching the screen and enlarge the interface's virtual buttons, making the on-screen shortcuts easier to hit. The 800x480 resolution isn't bad for a screen of this size unless you're using the standard rearview camera while reversing. Then, the video starts to look pretty bad.

Like the rest of the cabin, the tech resists obsolescence with standard Android Auto, Apple CarPlay and MirrorLink technologies. If you've got a reasonably modern smartphone -- and I'd hazard that most of the Tiguan's young prospective buyers do -- then a simple USB cable can cover all of your navigation and digital media needs with Android and Apple's software without having to spend an extra dime on options. That's actually pretty neat.

Built-in, the standard receiver features USB connectivity for MP3 and iPod playback, Bluetooth for audio and hands-free calling, HD Radio, satellite radio and an SD card slot for the handful of you who carry your music around on a card.

One detail about this VW audio system that I like is that it pauses media playback when you lower the volume to zero. It's a small touch that almost certainly goes unnoticed by most, but is great for not missing a moment of my favorite podcast when I needed to quickly dip the audio at, say, a drive-through or toll booth.

At higher trim levels, Volkswagen does offer a navigation option with onboard maps stored in a second SD card slot and optional upgrades to a premium Fender audio system, but these options don't add a whole lot of functionality to the bottom line, especially for those who'd prefer to just use their phone. 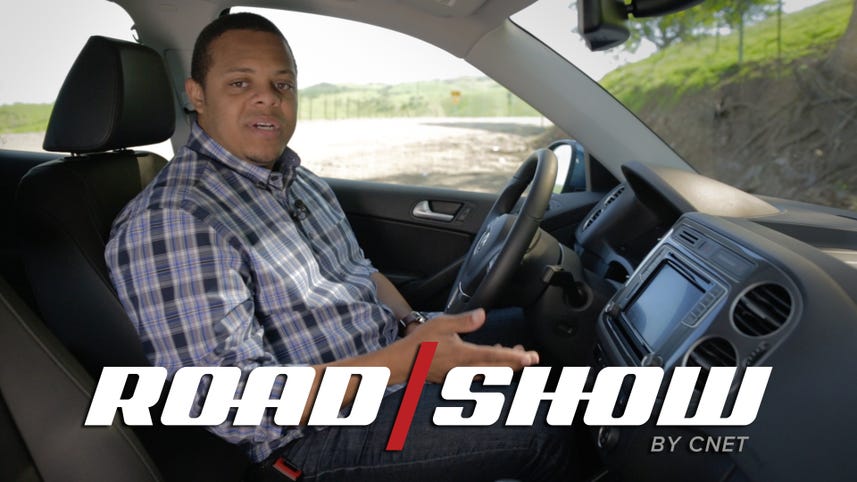 Turbocharged performance with a catch

Under the hood, you'll find a 2.0-liter, turbocharged four-cylinder engine making 200-horsepower and 207 pound-feet of torque. That mill is mated with a 6-speed automatic transmission in either a front-wheel drive configuration or with the optional 4Motion all-wheel drive system.

This engine makes a hell of a first impression with great off-the-line torque and a meaty mid-range. The power is very usable around town and its gearbox seems well sorted; there's a good deal of pep in the Tiguan's step. I found its "Sport" shifting program to be not sporty enough for my needs when stretching the SUV's legs on a country road and found the intake noise grating in the upper registers of the tachometer's swing. However, this isn't an enthusiasts car, so those aren't necessarily dealbreakers. Plus, most of the fun with this engine happens in the midrange of the torque curve, where the noise is a bit more throaty.

However, this engine does have an Achilles' heel. At an EPA estimated 22 mpg combined (20 mpg city and 24 mpg highway), the Tiguan trails its competition. The Mazda CX-5 and Honda CR-V, for example, tickle the 30 combined mpg mark. Plus, the Tiguan is probably the only ride in this size and price class that guzzles premium fuel. Together, these details sort of undermine its long-term value proposition.

Whatever performance goodwill the Tiguan earns with its torquey engine, it wastes it away with uninspired handling. The ride feels soft and vague when tossing the Tiguan back and forth on a back road and the steering is a bit numb. It's comfortable enough and dynamic handling is probably so far down the priority list for the average Tiguan buyer that I don't think these criticisms will matter much, but so soon after driving the new Mazda CX-5, the Tiguan just felt disappointing.

Part of the disappointment was weird ergonomics. The steering wheel tilts the rim away from the driver's seat at an odd angle that made finding a good seating position difficult and always felt a bit awkward.

The 2017 Volkswagen Tiguan 2.0T S starts at $24,995 or $25,860 when the destination charge is included. Fully loaded, you could push the sticker price to above $37,000 for an SEL model with 4Motion, though the SUV struggles to offer much value beyond the lower end of the range.

The upper trim levels feature a few more creature comforts and options, including a panoramic moonroof, leather seats and better speakers. However, you won't find any extra tech -- no driver aid features such as adaptive cruise or lane keeping assist and no automatic emergency braking, pedestrian detection or other safety features. At the upper trim levels, it becomes harder to stomach the Tiguan's price tag compared to more fully featured, fun and fuel-efficient models from Honda, Ford and Mazda.

And then there's the looming larger 2018 Volkswagen Tiguan that will steal the spotlight at dealerships later this year with more space, better tech and a new look, inside and out. Unless you can get a really good deal on a 2017 Tig, you should probably wait and see how the newer model stacks up.