The Performante is far more than just a faster Huracán.

Drive a base Lamborghini Huracán and it's hard to imagine ways in which it could improve. It's a car that sounds and feels utterly visceral in its ferocity, wrapped in an out-of-this-world shape worthy of its spotlight placement in posters on young car enthusiasts' bedroom walls. Or, I suppose, the backgrounds of their iPhones.

More power and less weight are only part of the story. Lamborghini's active aerodynamics truly transform the already incredible Huracán.

If the infotainment tech looks old, that's because it is. Like, really old.

This is much more than just a faster Huracán. The Performante has a character all its own.

Yet all it takes is one drive in the new Huracán Performante to feel that this is, somehow, an even more incredible execution of Lamborghini's modern icon. It's not just about the usual super-supercar fixins like more power and less weight, either. Sure, those attributes are baked in, but the Performante's pièce de résistance is the way it cuts through the air and sticks to the road. That big wing out back ain't just for show, folks.

In fact, despite being a fully active piece of body work, the Huracán Performante's rear wing doesn't move at all. It's completely fixed, and totally hollow. Two of the external ducts on the engine cover channel air up inside the wing, then through slats underneath the spoiler itself. This mitigates some of the added drag from the fixed wing, allowing for better acceleration. But when the ducts are closed, maximum vertical downforce is available -- some 750 percent more than a standard Huracán coupe. ALA can even split air between the left and right sides of the wing, for aero vectoring, increasing downforce, and therefore traction, on the Huracán's inner rear wheel while cornering.

Up front, ALA controls the Huracán's lip spoiler, opening and closing flaps in less than 500 milliseconds. When the flaps are open, air pressure on the lip is reduced, and air is directed underneath the car for reduced drag. When closed, greater downforce is applied to the front end, resulting in better stability for higher-speed cornering and braking.

The best part? It all happens automagically. You don't have to put the Huracán in a certain drive mode or adjust any settings. The car's active aero systems are always on, controlled by the car's computers in real time and dictated by driving style. It's silently sweet.

More than just a faster Huracán

Your driving style can vary greatly, too. While I agree with Tim Stevens' earlier thoughts that the Huracán Performante isn't exactly a road trip car, I must point out that it's far more amicable to city commuting than you might initially expect.

Sure, the chassis is some 15 percent stiffer, and the car rolls on 20-inch wheels wrapped in super low-profile 245/30 front and 305/30 Pirelli P-Zero Corsa tires. But on the drive from downtown Los Angeles to my canyon test roads out near Palmdale, the Performante isn't a punisher. The default Strada (street) drive mode leaves enough give in the suspension to soak up minor imperfections, and the light, direct steering is a joy to use even at slow speeds. I'll also note the quick-to-rise front-end electronic lift is an absolute must-have for negotiating speed bumps and California's notoriously angular highway entrances. It's $6,900 well spent.

I have no doubt that the Huracán Performante is anything less than brilliant in full-on track attack mode. But even on a warm SoCal morning with empty back roads at my disposal, there are few cars that I've found as entertaining as this winged wonder.

The bull's beating heart is the same 5.2-liter V10 as the standard Huracán, with output increased by 28 horsepower and 29 pound-feet of torque for new ratings of 630 and 442, respectively. With no forced induction assistance, the free-breathing V10 delivers predictable, linear acceleration -- an unrelenting avalanche of thrust with a purely Italian soundtrack that resonates off the hills and makes you grin with every hard stomp of the throttle. Sixty miles per hour? You'll be there in less than three seconds. Top end? Try 202 mph. Hot diggity damn.

A seven-speed dual-clutch transmission handles shifting duties, best controlled via some of the finest, steering column-mounted shift paddles available anywhere. Left to its own devices, the transmission never skips a beat. It'll let you rev the hell out of this engine each and every time, blipping the throttle on downshifts and never holding gears for too long when you've finally decided to slow down and take it easy.

With each hairpin turn up and down the mountains of Angeles National Forest, I'm burying my foot deeper into the throttle, digging into the carbon ceramic brakes later, developing a bond of trust with the chassis and powertrain and aerodynamics. You don't feel the active aero working in a reactionary sense -- rather, it works with your steering and throttle inputs to keep every corner of the Huracán perfectly stable through every corner, every time. I have driven few cars that inspire driver confidence at the same level as the Huracán Performante.

You feel like a freaking fighter pilot behind the wheel. Just look at that cockpit. A beautiful mess of buttons and toggles -- not to mention an engine start button hidden behind a bright red, fighter jet-style cover -- the Huracán is as outrageous to behold from behind the wheel as it is from outside.

Leather, Alcantara and carbon composite materials abound. There isn't a single bit of interior structure that looks or feels anything less than supercar chic. The Performante-specific seats are crazy supportive, though also sort of a pain to get in and out of. The flat-bottom steering wheel is of perfect diameter and thickness for quick work. Hell, even the floor mats are totally rad. They're constructed from aluminum, wrapped in fabric and embossed with Lamborghini's honeycomb pattern.

Watch this: Lamborghini's Huracan Performante tears up the track at Imola
07:31 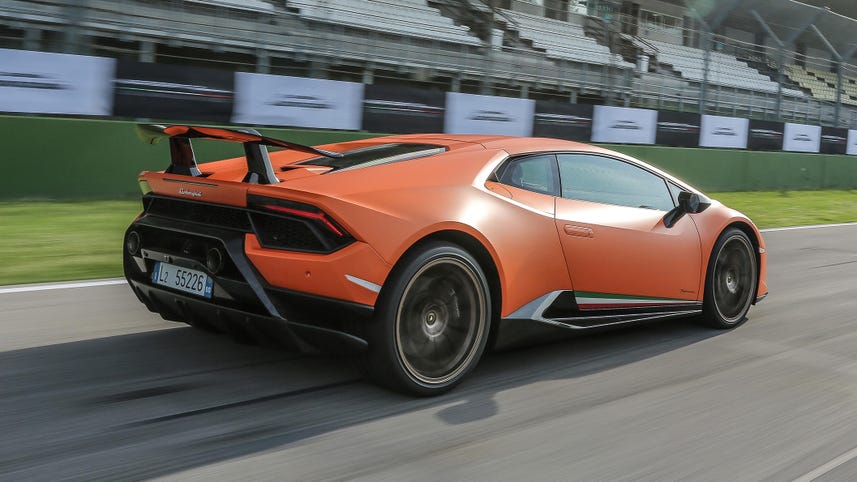 The onboard tech, meanwhile, is a sore spot. It's not that the functionality isn't there, it's that the system looks and feels every bit its age, right down to the outdated buttons and dials on the center console. Remember, the Huracán shares its bones with the last-generation Audi R8, so infotainment duties are handled by a decade-old version of Audi MMI. Like, the ass-backward MMI where you turn the control dial left to scroll down.

Lamborghini's digital cockpit may have formed the bones for the modern Audi and Volkswagen systems, but it's now trailing behind in terms of graphic quality and processing speed. It's not nearly as crisp or reconfigurable as Audi's Virtual Cockpit, or even what Volkswagen offers in the 2019 Jetta. Apple CarPlay is part of the software now, but it's brutally clumsy to operate via the MMI dial. If you prefer Android Auto, don't get your hopes up.

Oh gosh, I don't know. You can pretty much customize the Huracán Performante any way you want -- it's a Lamborghini, after all. You'll need $274,390 to start, not including $3,495 for destination and handling and $2,100 for the gas guzzler tax (this thing is EPA-rated at 16 miles per gallon combined). Lamborghini actually charges for normally standard things like cruise control ($1,000) and Bluetooth ($1,000), but I suppose that's par for the course in the world of luxury exotics.

The Performante commands some $30,000 more than a base Huracán coupe. But if you're already one of the well-heeled types who have no problem forking over a quarter of a million dollars for a supercar, I'm willing to bet an extra 30 large isn't going to make or break your bank account(s).

The Performante looks and sounds and feels every bit the world-class supercar it is. Incredibly capable with limits I'll never come close to finding on public roads, but totally calm and collected on the commute home, this isn't just a quicker, more expensive Huracán. It's a remarkable experience all its own.