Luxury features and driver-assistance tech are in high supply in Infiniti’s three-row QX60.

Three-row crossovers are all the rage these days, and I'll admit, it's easy to see why. These vehicles offer lots of passenger and cargo space, and most aren't half-bad to drive, either. Enter the 2018 Infiniti QX60, an attractive, luxurious, seven-passenger CUV with enough onboard tech and driving aids to satisfy my inner motoring geek.

The QX60 is chock-full of driver's aids and features a comfortable ride.

While not the sportiest crossover on the market, this three-row family-hauler is a satisfying and comfortable ride.

For 2018, the Infiniti QX60 is available with a choice of front- or all-wheel drive, and the only engine on offer is a 3.5-liter V6. If you were hoping to get your hands on one of Infiniti's QX60 Hybrid models, well, you'd better hope your local dealer still has a 2017 model sitting on the lot. 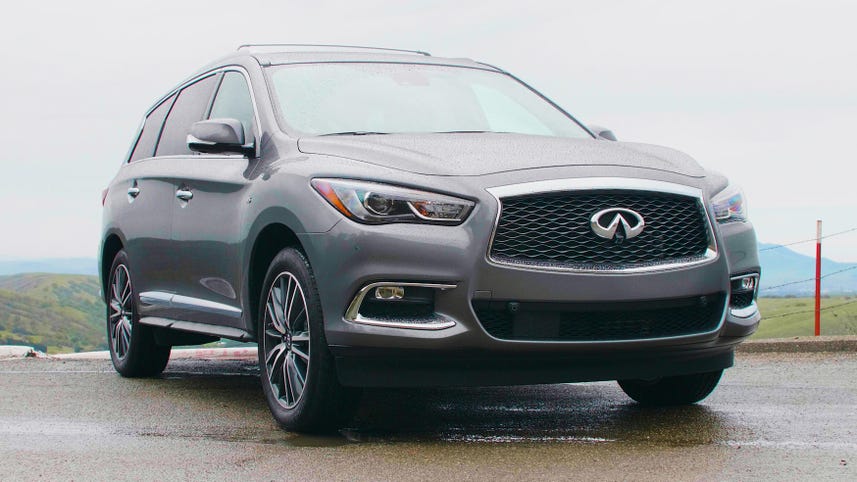 The V6 puts out 295 horsepower and 270 pound-feet of torque, enough to give this family hauler a fair amount of hustle. The engine is mated to a continuously variable transmission that simulates the gear-changing characteristics of a conventional automatic transmission -- not that you'll fool me into believing this is anything but a CVT. All-wheel-drive models like my test car are expected to return fuel economy readings of 19 mpg city, 26 mpg highway and 22 combined. During my week with the car, I saw an average of 21 mpg.

While modern three-row crossovers are pretty nice to drive, they certainly aren't enthusiast machines. The QX60 is designed for comfort and practicality above all, not spirited drives on winding backroads. Sure, there's a Sport drive mode that offers more aggressive throttle and transmission mapping, but it doesn't adjust the suspension in any way, so the ride quality is still pretty soft and floaty -- there's tons of body roll here. That said, the QX60 is supremely comfortable, soaking up bumps and pavement imperfections with aplomb. The steering offers minimal amounts of feedback and feels light at higher speeds, though oddly, there's a greater feeling of heft during slow-speed maneuvering, which is pretty much the opposite of what I'd normally want.

Infiniti packs a ton of driving aids in the QX60. New for this year is a rear door alert that can help you remember to take things you left in the back seat. I really dig Distance Control Assist, which can keep a steady distance between the QX60 and the car in front, even bringing the CUV to a full stop. It's a good way to break a tailgating habit, but also means you have to wait until you've fully changed lanes before trying to accelerate to pass. The throttle will physically resist the inputs of your foot if you try to accelerate before the lead car has cleared the QX60's path. This resistance also occurs when the car is in Eco mode, keeping you from driving like a hooligan.

The QX60's adaptive cruise control works really well in stop-and-go traffic. It'll bring you to a complete stop and move forward when traffic starts to go again. But if you sit stopped for too long -- longer than the count of three -- you have to hit the "reset" button on the steering wheel to get back in the adaptive cruise game.

On top of those features, the QX60 has lane departure prevention and blind spot intervention, which keep the crossover in the intended lane with gentle brake inputs. The CUV also features predictive forward collision warning, which actually monitors the car in front of the car in front of you, and can preemptively react if things are about to go awry.

All of this driver-assistance tech is the bomb, but I can't say the same about the QX60's infotainment system. Infiniti's InTouch tech is old, the graphics are dated, and it's littered with menus and submenus. Apple CarPlay or Android Auto? Fugettaboutit.

InTouch is controlled via rotary dial on the center stack or shortcut buttons below the 8-inch color screen, all of which is just far enough away from the driver that I have to take my eyes off the road to make sure I'm grabbing the right dial. Pairing my phone is a simple process, but I also essentially have to do it twice -- once to enable Bluetooth for calls, and a second time to allow audio streaming. There are two USB ports up front, one for audio connectivity and another just for charging. An additional USB outlet is found in each of the rear rows of seats.

Speaking of which, the second-row seats slide far forward, making it relatively easy to access the third row. Once back there, the QX60 has a maximum 30.8 inches of legroom, which handily beats the 23.5 inches of the Lexus RX 350L.

Press the QX60 into hauling duty and there's tons of room in the cargo hold. With all rear seats folded flat, the QX60 boasts 76.5 cubic feet of cargo space, enough for 321 12-packs of Diet Dr. Pepper. That's more space than an Audi Q7 or Acura MDX, but less than the 86 cubic feet offered in the slightly larger Volvo XC90.

The 2018 Infiniti QX60 starts at $43,300, or $45,100 if you want all-wheel drive. For my money, I'd leave the AWD on the table -- it's not super-necessary out here in California, though I'd probably feel differently if I lived in Colorado or some other snowy state. Instead, I'd spend my money on the $7,300 Deluxe Technology Package, which includes all of the aforementioned driving aids plus a sunroof, cooled front seats and heated second-row seats. Of course, in order to get the Deluxe Technology Package, you have to add the $1,800 Premium Package that gets you a 13-speaker Bose sound system, as well as the $2,900 Premium Plus Package that adds navigation and a 360-degree camera.

If you want a less-robust set of tech features, maybe just go for the $1,850 Driver Assistance Package. You won't get predictive forward collision warning, active blind-spot intervention or lane-keeping assist, but you do get adaptive cruise control, the cool Distance Control Assist and blind-spot monitoring. If you're putting kids in the back on the regular, consider getting the $2,150 Theater Package, too, which gets you a pair of 8-inch rear entertainment screens and wireless headphones.

The QX60 isn't the most exciting vehicle, but it's plenty satisfying. It's a great family hauler with tons of driving aids, and it's both easy and comfortable to drive. For a luxury car that needs to be a lot of things to a lot of people, you could certainly do worse than this pleasant QX60.