2018 Infiniti Q50 review: On the ragged edge of driving satisfaction

So, so close to being a stunner, but some too-clever technology holds it back.

The Q50 is Infiniti's best-selling model, even besting its popular QX60 crossover. It's available in no fewer than 12 different models with four powertrain choices, and the option of rear- or all-wheel drive. You can get a no-nonsense commuter with just over 200 horsepower, or even an all-wheel-drive V6 hybrid. But if you like your sport sedans to pack a proper wallop, you'll want to check out this Q50 Red Sport 400.

A powerful powertrain and quick-shifting transmission make it fun to fling about. Plus, it has stellar good looks and plenty of driver's aids.

The InTouch infotainment system needs an overhaul, stat. The steer-by-wire system is a bummer for those who like a chatty steering set up.

The Q50 Red Sport has a lot going for it, but it also has a tough time overcoming its faults.

Red hot, but there's a problem

In Red Sport 400 guise, the Q50 uses a 3.0-liter twin-turbocharged V6 engine that throws 400 horsepower to the rear wheels -- great for testing along my super-secret back roads outside Oakland, California. With a complementary 350 pound-feet of torque (which comes on low from just 1,600 rpm), power is strong and always available. With its adaptive suspension set to Sport Plus, the Q50 willingly dives into tight turns and blasts out with incredible poise. 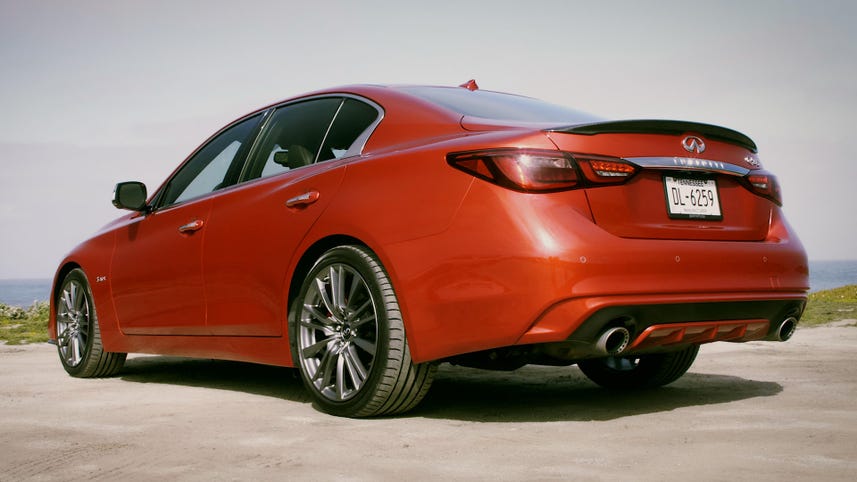 Yet, something's a bit... off. My test car has Infiniti's Direct Adaptive Steer system, still the only electronic steer-by-wire technology on the market. Unlike other steering setups, there is no mechanical connection between the steering wheel and the Q50's front wheels. Instead, steering inputs are fed to a computer, which then tells the wheels what to do. The advantage here is quicker response to inputs, better isolation from harsh impacts like potholes, and a richer set of driver's aids, which I'll get to in a minute. The drawback is a complete loss of analog feedback. You just don't don't know exactly where the tires are or how much grip they have organically, you only have simulated feedback. Some drivers probably won't notice a difference, but enthusiasts almost certainly will. Steering feel is one of the most important traits of a performance car, and it's an area where this Q50 dearly suffers -- even after numerous attempts to fix this unique technology.

The EPA rates the Q50 Red Sport 400 at 22 mpg city, 26 mpg highway and 20 mpg combined. Through my week of testing, I see a combined readout of 20.7 mpg, which isn't great, but considering all my backroad antics and heavy right foot, it's also nothing to complain about.

Great tech, but there's another problem

The Q50's suite of available driving assistance systems is very rich. Heading back into San Francisco, I enable adaptive cruise control, which keeps the Q50 at a consistent distance behind a lead car, even bringing it to a stop and pausing briefly before taking off again. A further bit of available assistance comes via Infiniti's Distance Control tech, which slows the Q50 down if I'm following a lead car too closely. In stop-and-go traffic, it enables one-pedal driving. Coupled with lane-keep assist shepherding me into the center of my lane, it's easy to breeze through the toll plaza and out onto the San Francisco Bay Bridge.

While on the bridge, my phone buzzes with a text message. And while I'd normally be able to have it read aloud via Apple CarPlay, the Q50 doesn't feature this smartphone-mirroring technology, nor does it have Android Auto. That's a huge ding against the Q50's InTouch infotainment system, though far from its only problem.

There are two screens inside the Q50: an 8-inch top display for navigation, and a 7-inch unit below that for vehicle menus and controls. Both are touchscreens, though the top can be controlled by steering wheel buttons or a multicontroller on the center console. The lower screen has default shortcut buttons for audio, climate and home screens, and only functions via touch response.

Since this tech hasn't been significantly updated for quite some time -- especially the top screen -- I'm stuck with outdated graphics and a ton of menus and submenus. There are some interesting features within the InTouch system, like a driving performance screen with a g-meter and eco-drive report card, but the whole interface could use a thorough rethink.

Thank goodness the rest of the Q50's interior is lovely. The eight-way adjustable seats are supportive and offer four levels of heat, perfect for a cold-all-the-time gal like myself. There's high-quality leather everywhere, and the cabin's design is contemporary. You can fit four adults in here just fine, though remember that this is a smaller sedan, so it's probably not the best if you frequently put adults in the rear seats, especially for more than short jaunts.

My Q50 Red Sport 400 tester has the gorgeous Dynamic Sunstone red paint, which is super rich and totally worth the $800 premium. The Red Sport model gets a few design tweaks that separate it from lower trims, but it takes a keen eye to spot them. The air intakes are slightly different and the front bumper is a bit more aggressive in its shape. Dark-finish trim pieces round out the exterior changes, and all-in, I think this car looks great.

Since I live in California, I'd probably pass on the all-wheel drive. And while I want to spring for the $2,700 Proactive Package, which includes all the cool driving aids like adaptive cruise control and Distance Control, it also bundles the aforementioned Direct Adaptive Steering, which I hate. Furthermore, the Proactive Package requires the purchase of the $2,650 Sensory Package, which offers a 16-speaker Bose sound system. With no performance upgrades in either of these options, I'd likely stick to standard Red Sport spec.

The Q50 is just one option in a crowded sport sedan segment. The BMW 3 Series starts at a comparable price and can be optioned with a manual transmission. The Mercedes-Benz C-Class offers a bit more standard power and has a more premium-feeling cabin, but it costs more. If you're looking for a relative bargain by comparison, try the Kia Stinger -- the GT model is nearly as powerful as the Red Sport, but it's more capacious and it starts over $12,000 less.

In the end, it's tough to choose the Q50 over its many competitors. It's pretty and luxurious, and comes close to being a great sport sedan. The engine is strong and its feature set is impressive. If it weren't for the InTouch infotainment system and that lousy steering setup, it'd be much easier to recommend.