Ford’s iconic Mustang is a better sports car than ever before -- just be sure to skip the automatic transmission.

Every time I drive a Ford Mustang, I'm impressed. With each new iteration, Ford's icon gets a little bit sharper, and a little bit easier to live with, as well. Performance and technology abounds; the Mustang is truly a world-class sports coupe.

460 horsepower for $35,000 is a heck of a performance value. With the GT Performance Pack, the Mustang is better to drive than many of its more-expensive rivals.

The iconic Ford Mustang is more refined than ever and combines muscle car power with sports car poise.

Two big options highlight the Mustang's 2018 model year changes: the GT Performance Pack and a brand-new 10-speed automatic transmission. Big talking points, both, but only one of them positively impacts the Mustang experience.

2018 Ford Mustang GT is sharper and smarter than before

While there's a lot to be said for the base Mustang's 2.3-liter turbocharged I4 engine, I can't imagine owning this car with anything other than the fantastic Coyote 5.0-liter V8. Not only do you get 460 horsepower and 420 pound-feet of torque -- which is plenty for this 3,705-pound coupe -- it's all delivered with the sort of predictable linearity that only a naturally aspirated engine can provide. Cap it off with one of the sweetest, most muscular soundtracks on the road today, and it's a rewarding combination that's all 'Murica.

What's most impressive about the modern Mustang is how balanced and tactile it is on winding roads. Much of the the coupe's improved handling is thanks to Ford's new GT Performance Package, a $3,995 option that adds functional upgrades like Brembo front brakes, revised front springs, a larger rear sway bar, stiffer chassis tuning and a new Torsen limited-slip differential, as well as cosmetic goodies such as unique 19-inch wheels and a restyled rear wing. Beyond that, you can order the Mustang with a MagneRide suspension that continuously adjusts damping rates at all four corners -- $1,695 well spent.

Along familiar canyon roads, I'm enjoying a level of involvement I've only previously felt in Mustangs that wear Shelby badges. No longer a one-trick pony car of straight-line speed, the Mustang has evolved into a rewarding sports car, with sharp, accurate steering, flat cornering characteristics and lots of communication both through the steering wheel and the seat of your pants.

If you need even more precision, consider upgrading to the Level 2 performance pack. It costs $6,500, but includes the MagneRide suspension and gets you super-fat, super-sticky 305/30-series Michelin Pilot Sport Cup 2 tires. The car tested here has the Level 1 kit, so if you're worried about the added cost of the Level 2 pack, know that you still get a really wonderful sports car should you opt for the less-aggressive kit. 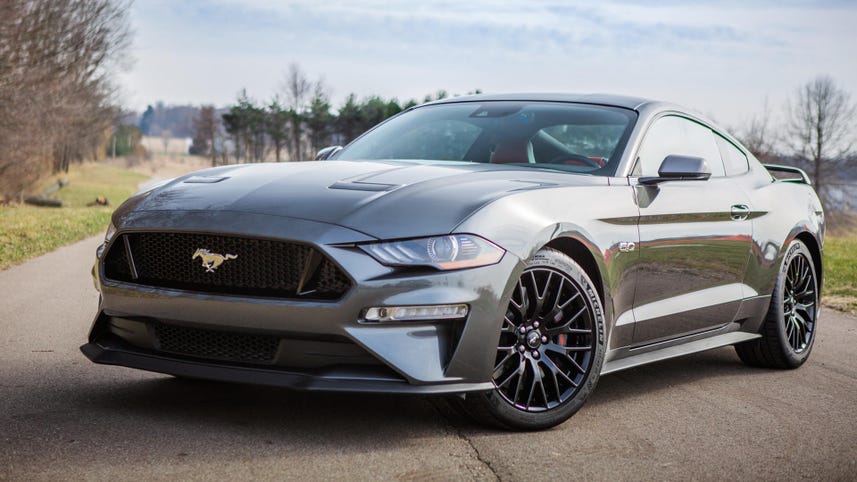 I know that stick-shifts aren't for everyone, but the Mustang GT's automatic transmission ($1,595) is an absolute buzzkill. No matter what driving mode you're in, and no matter if the gear lever is in Drive or Sport, the automatic is poorly matched to just about every driving style.

Around town, the shifts are jerky and poorly timed. On the freeway, it's constantly hunting for the right gear. In the canyons, it'll refuse to downshift before a turn but then hold gears too long when you're running at a steady speed. You can put the transmission in manual mode and operate it via the steering wheel-mounted paddles, but even then, there's a noticeable delay in shift time. This transmission trouble isn't just unique to my specific test car, either. Editor Jon Wong spent a month with a similarly spec'd Mustang GT in Detroit, and his only major complaint was that lousy 10-speed.

What's more, the 10-speed doesn't vastly improve fuel economy, either. The Mustang GT carries EPA ratings of 15 miles per gallon city, 25 mpg highway and 18 mpg combined with the six-speed manual, and despite having four extra forward gears, the automatic only improves the city and combined ratings by a single mpg each. During my week of testing with mixed driving, I saw observed fuel economy of just 17.5 mpg.

Rich with features and tech

The 2018 Mustang is a car that's easy to live with every day. From its comfortable seats and various luxury amenities to its wealth of onboard tech, there's a lot to like here. Sure, a few swaths of crummy plastic still line the doors and transmission tunnel, and I still hate that the toggles on the center stack only move in one direction (and the wrong direction, at that), but overall, the Mustang's interior is really nice. Comfortable, supportive seats are trimmed in leather, and are heated, as is the steering wheel. The center stack is kind of button-heavy, but all the car's controls are easy to find.

Front passengers enjoy a respectable amount of headroom, and while there are technically two seats in the rear, I wouldn't ask adults to sit there for more than a few minutes. Forward and side visibility is pretty good -- certainly better than a Chevy Camaro, at any rate -- though the thick, sloping roofline creates some hearty blind spots. 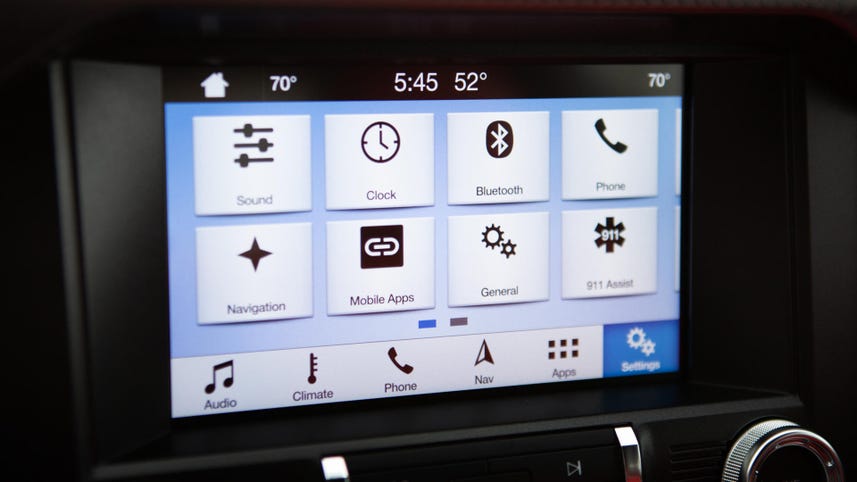 This GT Premium model comes standard with an 8-inch touchscreen infotainment system, running Ford's latest Sync 3 software. It's not the prettiest system, with a limited color palette and fonts that sort of read like a large-print greeting card, but what Sync 3 lacks in visual flair it more than makes up for in functionality. It's an intuitive interface, with quick response times to inputs and a menu structure that's super-simple to master. Factory navigation is optional, either as part of the $2,200 Premium Plus pack or as a $795 standalone option, though if you'd rather save your money, Sync 3 comes standard with Apple CarPlay and Android Auto.

The Premium Plus pack also gets you Ford's new 12-inch digital gauge cluster, with crisp, bright, high-resolution graphics. It's a reconfigurable display, too, with different layouts depending on driving mode. It's not quite as slick as Audi's Virtual Cockpit, but considering a lot of other lower-priced sport coupes don't even offer something like this, it's a nice upgrade.

The Mustang gets a bit of driver-aid tech, too, largely by way of Ford's Safe & Smart package, which can only be had on the Premium trim. For $1,495, you get adaptive cruise control, automatic high-beam assist, blind-spot monitoring with cross-traffic alert, lane-keeping assist, rain-sensing wipers and more. Best of all, it doesn't require the addition of the automatic transmission. Win-win.

Not as pretty anymore

Beauty is in the eye of the beholder, but I think Ford totally botched the Mustang's 2018 model year facelift. The new nose is hardly an improvement -- what was previously sleek and sporty now just sort of looks droopy and dumpy.

That aside, the rest of this car looks great, especially in fastback coupe form. The Mustang has a great stance, especially here in all-black with the 19-inch dark alloy wheels of this GT Performance Pack-equipped car.

Ford offers the Mustang as a convertible, in both base and Premium trims, and with four- or eight-cylinder power. I'd probably still buy the coupe, but I'm sure a 2018 Mustang Convertible would make a heck of a nice rental car for your next vacation.

For me, I'll upgrade to the GT Premium, which gets me all the aforementioned niceties for $39,190. Paint mine Lightning Blue (one of the few no-cost colors) and don't you dare add any of the optional racing stripes. I'll take the $2,200 401A Premium Plus Package, mostly for the 12-inch digital gauge cluster and the heated steering wheel, and I'll go for the $6,500 Performance Package 2 because, hot damn, is it good (stay tuned for a review, soon). Add $895 for the active exhaust, and I'm out the door for $49,780.

At $35,000, the Mustang GT represents one heck of a performance bargain. You aren't going to get 460 horsepower for that little coin from any other automaker. Step up to one of the GT Performance Pack cars and yes, the price gets higher. But it's not like you're going to get into a Chevy Camaro for much less -- a comparable Camaro 2SS 1LE model is also going to set you back $50K.

Really, even at $50K, the Mustang offers a sports car experience that's more rewarding than cars costing tens of thousands of dollars more. A BMW M4 Coupe starts at $70,000, and I'd take the Mustang GT every time. Assuming it doesn't have the 10-speed auto, anyway.