We put Cadillac's hands-free highway Super Cruise system to the test on the road and even in the rain.

Meet the Cadillac CT6… again. We've seen Caddy's flagship luxury sedan on more than a few occasions since its 2016 debut. We've seen base and fully loaded models with a range of conventional powertrains and even a recent plug-in hybrid model. And yet, there always seems to be something new to find within the sharply sculpted sheet metal. This time it's Cadillac's new Super Cruise technology: A hands-off highway autopilot system that can steer, brake and accelerate on its own.

Cadillac's new Super Cruise technology is one of the most advanced (and awesome) driver aid systems available today.

The 2018 Cadillac CT6 is a solid luxury value with outstanding driver assistance tech.

I spent a week living and commuting with a fully-loaded, Super Cruise-equipped 2018 Cadillac CT6 Platinum 3.0TT to get a feel for this leap towards the future of autonomous driving.

Hands-free on the highway

Super Cruise is a highway autopilot system that allows the driver to take their hands off the steering wheel under certain conditions, allowing the car to basically drive itself. The tech is the culmination and evolution of a variety of driver aid features we've seen before, such as adaptive cruise control and lane keeping steering assist.

While on the highway and when certain conditions are met, I could press a single Super Cruise button on the steering wheel to activate the system and set my cruising speed. A light strip along the top of the steering wheel then illuminates green, telling me to simply let go and let Cadillac Technology Jesus take the wheel.

As long as that green strip is illuminated, the CT6 will drive itself, steering between the lane markers, braking for slower moving vehicles ahead and speeding up to maintain my set cruising speed when the way is clear.

At any point I could grab the wheel and steer for myself to, for example, change lanes or pass. The green light strip turned blue to let me know that I was in control. Once centered in the next lane, the light turns green again and I simply let go of the wheel. The ease of transitioning back and forth between human and machine control (and the clear indicators of those modes) was one of the details that most impressed me about Super Cruise.

There are, however, conditions that must be met before and while Super Cruising. For starters, the technology only works on approved highways that Cadillac's engineers have gone out and laser scanned with millimeter accuracy. Cadillac maintains a growing map of these approved roads on its website, so you can check your roads before you go, but we're basically talking much of the interstate system and many major highways.

The CT6 checks that map data against high-accuracy GPS and its camera-based lane recognition software. If everything lines up, you're free to cruise hands-free. If there's a discrepancy -- maybe there's road construction or the lane markers are blocked by snow -- the system will not activate or, if already active, will prompt the driver to temporarily regain control.

That brings us to the final, most important condition. Super Cruise is what you'd call a Level 2 autonomous system: It can operate with hands off the wheel, but requires the driver's eyes and attention remain focused on the road. To ensure this, the system uses small infrared (IR) camera to watch my face and eyes to make sure they're pointed forward, even at night and even through sunglasses. The system gives a few seconds of leeway so I could change the radio station, glance around or converse with a passenger, but if I looked away from the road for too long then Super Cruise would pull my attention forward by flashing the green light bar and vibrating the seat.

If I continued to ignore the prompts to pay attention, the system would eventually flash red, tell me to grab the wheel and just deactivate once I'd reclaimed control. If that happens, you won't be able to reactivate Super Cruise until the car has stopped and the ignition has been cycled -- a bit of small punishment for being an inattentive driver.

However, if you still haven't grabbed the wheel, the system will assume you're incapacitated. It will activate the hazard lights, maintain steering control and begin to slow the vehicle to a stop within the current lane. Once stopped, it will even contact emergency services via the OnStar cellular connection.

On the road, Super Cruise worked fantastically and consistently. Over the course of a week of commuting, I'd wager that almost 80-percent of my nearly 300 test miles were logged with the Cadillac's computer in control. At first I was a bit nervous, but quickly grew comfortable and, surprisingly, more relaxed with the tech in heavy traffic. I Super Cruised in light and stop-and-go traffic, at day and at night, at low and high speeds and never once did it jerk the wheel oddly or stab at the brakes in an unpredictable manner. I even used the system in heavy rain and it worked surprisingly well. (You can see it in action in the video below.)

Watch this: Super Cruising with the 2018 Cadillac CT6's autonomous tech
05:04 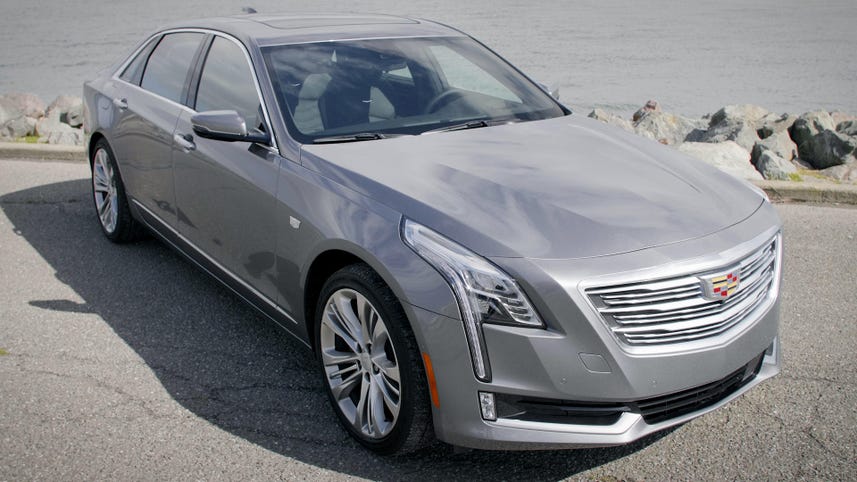 When explaining or demonstrating Super Cruise to my friends, most were disappointed to learn that I had to keep my eyes on the road, but I understand why it's necessary. Though polished in execution, Super Cruise is very limited in what it can actually do. It can't change lanes, dodge debris or make decisions. It does one thing well: Stay in its lane. I was grateful that my eyes where on the road when the system prompted me to take over when approaching a toll plaza or when some jerk cut the Caddy off in traffic and I had to quickly step in.

Eventually, we'll get to the point where self-driving cars can negotiate complex situations, but for now I appreciate the clearly defined strengths and limitations of Cadillac's technology and how the automaker has clearly defined my expectations of Super Cruise's capabilities.

The CT6 also features a host of systems that improve safety while your hands are on the wheel. There's lane keeping steering assist, adaptive Cruise control that works in stop-and-go traffic, automatic emergency braking with pedestrian detection, blind-spot monitoring, rear cross traffic alert and more available to the CT6 buyer.

Continuing the semi-autonomous theme is the available parking assist system that can automatically sense and steer the sedan into parallel and reverse-perpendicular parking spaces. For those who prefer to park for themselves, there are parking distance sensors and multiple cameras that help improve safety at low speeds.

One of my favorite safety features is the rear camera mirror. This novel technology hides a small screen behind the reflective glass of the rear view mirror that can be toggled to display an always-on rear camera feed. This is a separate view from the standard backup camera and is useful for improving rear visibility when tall passengers are in the back seats or when the rear window shade has been drawn.

The CT6 is available with a few different engine options, all unchanged since the last time I tested the CT6. At the entry point is turbocharged 2.0-liter making 265 horsepower and 295 pound-feet of torque. Midrange is the 3.6-liter V6 at a stated 335 horsepower and 285 pound-feet of torque. The top trim is a 404-horsepower, 400-pound-foot twin-turbocharged V6 option displacing 3.0 liters. All three feature Cadillac's 8-speed automatic transmission sending power to the rear wheels, but all-wheel drive is optional on the 3.6-liter and standard for the turbo V6.

There's also a Plug-in Hybrid version that we tested earlier this year with its 31 mile electric range. However, the PHEV isn't available with the Super Cruise system.

No matter what powertrain you choose, the CT6 is a quiet and comfortable ride. Active rear wheel steering works in concert with the optional Magnetic Ride Control adaptive suspension to help the Cadillac corner almost as well as it cruises. It's no canyon carver, but I appreciated extra dose nimbleness and stability when changing lanes quickly or tucking into an off-ramp almost as much as I loved the smoothness and compliance over some of the Bay Area's rougher roads.

In the dashboard is the same Cadillac Cue system that's been with the CT6 since launch. No surprises this model year.

It's still a good rig with a solid list of digital media sources, a well organized menu structure and responsive controls, but it's interesting how just a few years have made the interface look and feel dated compared to the slicker graphics of its competitors. Caddy's hardware is, for now, still solid with wireless smartphone charging, OnStar 4G LTE connectivity with wifi hotspot, voice controlled navigation and more.

If you're not a fan of Cue's interface, standard Android Auto and Apple CarPlay somewhat helps by allowing you to bring more modern maps and media apps from your smartphone into the dashboard simply by connecting a USB cable. Either interface looks great on the CT6's crisp and large touchscreen.

My biggest tech nitpick is with the touch pad controller on the center console. It's awkwardly positioned and even more awkward to use precisely while the car is rolling. The pad doesn't work with either the Android or Apple integrations and, for 99-percent of my infotainment interactions, the touchscreen is simply a more natural controller for the Cue system. Fortunately, the touch pad is tucked out of the way and easy to simply ignore.

The 2018 Cadillac CT6 starts at $54,095 for the base model, but I'd recommend starting at the $65,295 Premium Luxury trim level, which is where Super Cruise becomes a $5,000 option. If you're choosing a CT6, you definitely want Super Cruise. Add a $995 destination charge and you could be hands-free cruising from San Francisco to LA for just $71,290.

Our tested top-tier Platinum model includes every bell and whistle in the CT6's big ol' bag of tricks including rear seat entertainment, the amazing Panaray audio system, Super Cruise and more. With the upgrade to the twin-turbo engine, we're looking at a range-topping as-tested price of $89,290. That's a lot of money, but the Cadillac is priced very competitively when compared to the more expensive Mercedes-Benz S-Class, Audi's A8 and the BMW 7 Series. Most of these vehicles offer arguably some blend of better dashboard tech, better performance and superior fit and finish, but only slightly so.

Factor in that, for now, Cadillac is the only one at the table in the US offering hands-off autonomy and the deal starts looking a lot sweeter. Consider also that, in the time between testing and publication, Cadillac has announced a refreshed 2019 CT6 lineup that includes a V8-powered V-Sport model. It may be worth waiting for the new model or the 2018 incentive pricing that makes it an even better value.