Kyle Hyatt (he/him/his) hails originally from the Pacfic Northwest, but has called Los Angeles home for the past decade. He's had a lifelong obsession with cars and motorcycles (both old and new), and covers them for CNET Cars as its news & features editor.

When BMW first built the original R NineT in 2014, it was meant to serve as a birthday present to the company itself and be something of a limited-production motorcycle. When the bike started selling like crazy, it kind of caught the company by surprise. And with good reason. Here was a nearly $16,000 motorcycle with almost no technological features and an old air-cooled engine -- and BMW couldn't make 'em fast enough.

Fast forward a few years and BMW Motorrad is well and truly in the heritage-inspired motorcycle business. The original R NineT Roadster has been joined by a stable of slightly lower-priced and de-contented siblings, each trying to capture a different kind of magic. The one that stands out the most, to me, is the R NineT Urban G/S. 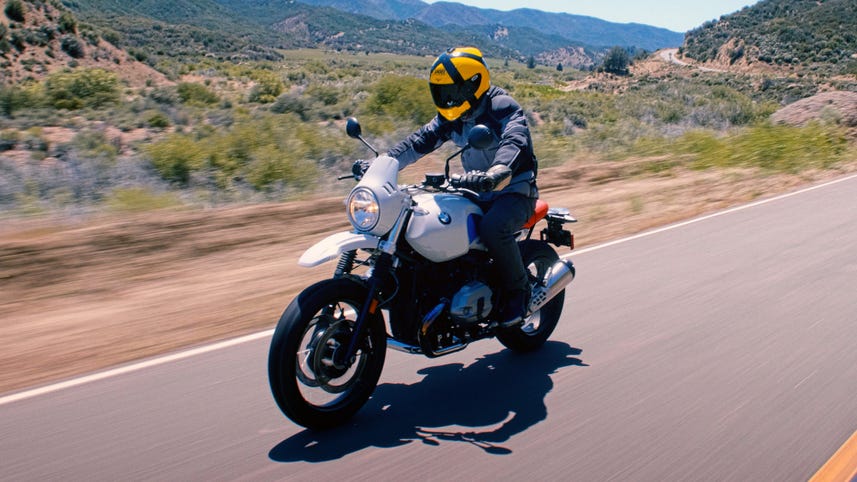 To those familiar with motorcycle history, the idea of an "Urban G/S" seems a little silly. After all, the original G/S was meant to blast across deserts and dominate the Paris-Dakar race, not schlep hipsters from coffee shop to brunch spot to bar on a Sunday. And yet, riding the Urban GS, it doesn't feel like a betrayal of its forebear. Indeed, it actually kind of makes sense.

The Urban G/S is a simple motorcycle. Unlike most modern Beemers, it lacks any real technological bells and whistles, instead relying on varying degrees of nostalgia and charm to worm its way into your heart and hopefully your garage.

The bike, like all R NineT's, is powered by BMW's 1,170-cubic-centimeter, air-cooled, horizontally opposed boxer twin engine. This motor first hit the scene in the 2004 R1200GS; a huge 600-pound behemoth meant to literally go around the world. In that application, the engine felt boring, docile and tractor-like. It turned on when you wanted it to, and it quietly vibrated away underneath you until you told it to stop.

In the R NineT, it feels like a giant dirtbike engine, all torque and power and vibration and fury. The engine rocks to the right when you thumb the starter, and again anytime you blip the throttle. It's loud and echoes off buildings, catching unsuspecting drivers by surprise. It's a magical engine, and BMW is brilliant for having given it a new lease on life. It gives you all the great air-cooled sensations, too, like the pinging as it cools once parked and the smell of hot oil in traffic. It's an absolute gem.

The transmission is a less rosy story. Compared to my personal Triumph Tiger 800 and the Ducati Scrambler 1100 I reviewed recently, the transmission feels borderline agricultural. Shifts don't feel positive and finding neutral, particularly while stopped, is a challenge. The clutch is heavy and can feel a little snatchy, owing in large part to its large, single-plate dry design, a BMW boxer hallmark.

The R NineT Urban GS doesn't get many of the fancy components that the big-boy R NineT Roadster does, but what's there still works well. The suspension is only adjustable for preload in the rear, with the front being unadjustable. The ride is stiff, but for a larger rider like me (6 feet, 4 inches, 300 pounds) that's a welcome thing. The brakes are basic black Brembos in the front, and a BMW branded single-pot caliper in the rear. While they're not sexy, they have excellent bite and modulation, and I never find myself wanting more. ABS is standard on all R NineT models; traction control is optional. The R NineT Urban G/S can be had with either standard on-road tires or slightly knobbier Metzelers. I specifically asked for road tires on my tester because they are much more liveable day to day and this bike isn't really meant for dirt anyway.

The riding experience of the R NineT Urban G/S is simply excellent, with only a few small caveats. First, while the suspension is decent on the bike, I find the flat, thin seat pretty much excruciating after about an hour of riding. Editor-in-chief Tim Stevens didn't register this complaint during his stint with the bike, so your mileage may vary. Next, while the big, torquey engine is a blast to rip from corner to corner, the lack of a fuel gauge is more than a little disconcerting. The boxer is a thirsty girl, and if you're going to ride outside of the city where gas stations aren't so common, pay close attention to that low fuel warning.

But small gripes aside, the NineT handles incredibly well for something with its geometry. The 19-inch front wheel should make the bike feel slower to turn, but the low center of gravity and the wide bars and long wheelbase make it feel willing to lean over while still feeling totally stable. The Urban G/S inspires a ton of confidence on a twisty road.

The engine has an incredibly linear powerband, and the deep wells of torque let you be a little lazy with the shifter, which considering how not that nice it is to shift, is a good thing. The sound the bike makes is addictive, and I regularly find myself wringing the motorcycle out to redline (whatever that is -- there's no tachometer) just to hear that nasal blat bellow out of the single, low-mounted exhaust can. The NineT's throttle response is perfect, not overly touchy, and being a cable throttle, as opposed to ride-by-wire, there is a beautiful tactile feel as you twist the grip.

Is the R NineT Urban G/S worth its $14,000+ (after delivery and dealer fees) asking price? Yeah, absolutely. Like all BMW motorcycles, it's beautifully screwed together, everything feels super high-quality and thanks to the proven-to-last engine, it should outlive you. Is it going to take you around the world? No, but BMW sells plenty of other bikes that will. Will it take you and your significant other up a canyon road or to a Silver Lake coffee shop? In the words of the immortal Robert Evans, "You bet your ass it will."