There is nothing staid about this stellar sports car.

A new all-wheel drive system can throw up to 100-percent of the power to the rear wheels, and the five-cylinder engine emits a raspy rumble.

No manual is offered and there is little in the way of driver's aids.

A stellar little coupe that can handle the back road twisties and inclement weather with ease.

The Audi TT RS is an all-wheel drive coupe that can technically seat four people, but it's better suited for two. Under its hood, a 2.5-liter turbocharged five-cylinder engine screams with the fury of 400 horsepower and 354 pound-feet of torque. The base TT and sportier TT S are lovely, but this RS pushes everything up to 11.

The TT RS' Quattro all-wheel drive system is based on front-drive architecture, meaning it can send power to just the front wheels under easy, straight-ahead driving conditions. But when I bury my foot in the throttle, a huge chunk of that power is immediately thrown to the rear. Switch the Audi Drive Select to Dynamic and a full 100 percent of the engine's torque can go rearward. The TT RS combines the best of all worlds: front-wheel drive when I don't care about it, all-wheel drive when I need it and rear-wheel drive when I want it.

I haven't been too impressed with Audi's steering in other models, but the TT RS won me over with quick inputs and a heavy feel in my hands. It's not the most chatty system, but then, most electronic power steering system trade road feel for efficiency. Still the Audi managed to provide a great on-center feel and crisp turn-in.

A fixed sport suspension is available as part of a $6,000 Dynamic Plus package, but Audi's standard magnetic ride setup is a-OK by me. The damping rates adjust in mere milliseconds, keeping the TT RS compliant on all types of roads, and incredibly flat through turns. I'll admit, the ride can prove a bit too harsh in Dynamic mode, almost causing me to spill my beloved Diet Dr. Pepper on one morning commute, but the Drive Select's Individual mode allows me to set suspension to comfort while keeping the other parameters dialed up to their sportiest settings. Full Auto works just as well, too.

Also included in the Dynamic Plus package are ceramic front brakes, which would definitely be worth the coin if you're planning on taking your TT RS to the track on the regular. However, during my time of backroad shenanigans I found the standard 14.6-inch front and 12.2-inch rear disc brakes to be more than sufficient, even after multiple 0-60 runs with a, let's say, less than ideal available stopping zone.

The exquisite design of the 2018 Audi TT RS

You can't get a manual transmission in the TT RS, but the seven-speed dual-clutch automatic gets the job done mostly to my satisfaction. The default programming shifts a little too early for my taste -- better for fuel economy, natch -- but a quick tug on the gear lever throws the transmission into a sport setting. The result is snappier upshifts and eager downshifts out of turns. For full control, I thwack the gear shift to the right into manual mode and use the paddle shifters. Here, the TT RS lets me run the engine up to the redline if that's my jam and downshift to my heart's content.

Driving like a hooligan is easy to do in the TT RS, though it means you'll see a noticeable decrease in fuel economy. The EPA says I should get 22 miles per gallon combined, but during my week of launching, screeching and general shenanigans I only saw 16.6, far below even the city rating of 19 miles per gallon. Oops.

The interior of the TT RS is like a lesson in German simplicity. The HVAC buttons are incorporated directly into the vents, so there are only five buttons on the center console: two for defrosting, one for traction control, another to turn off the parking sensors and a final button for hazard lights. The problem is that those last three buttons are seated in a bank of seven buttons, four of which are blank. These buttons control vehicle functions on other TT models, and while it's a small quibble, I haven't been able to get over the asymmetry.

I can't talk about any new Audi without extolling the virtues of Virtual Cockpit. The 12.3-inch screen is fully configurable and houses all vehicle data and infotainment functions. Google maps are displayed in full-color glory and an active internet connection makes searching for destinations a snap. The bummer? Apple CarPlay and Android Auto are only available as part of the $3,500 Technology Package. This package includes navigation, but with so many manufacturers offering smartphone integration standard, this move just seems cheap on Audi's part.

The infotainment system itself isn't bad, but it is riddled with menus and submenus. Everything can be controlled by buttons and scroll wheels on the steering wheel, or the traditional dial and shortcut buttons housed on the center console between the seats. The top of the dial supports handwriting recognition, but it takes a while to master this technique while in motion. It's easier to just use the voice recognition.

If you're looking for driving aids, well, look elsewhere. There is no adaptive cruise control or lane-keeping assist. A blind-spot monitoring system is part of the aforementioned tech package, but other than that, don't count on the TT RS to do any of the safety guess work for you.

Despite its diminutive overall size, the TT RS offers a still-useful 12 cubic feet of cargo space. While that's smaller than the 13.8 cubes offered in the BMW M2, it's bigger than the 9.7 of the Porsche Cayman, which is actually split between front and rear trunks. There is enough room in the cabin for a phone, a pair of sunglasses, a can of Diet Dr. Pepper and not much else. Pack light. Or use the rear seats as cargo holders. Real people can't fit back there anyway. 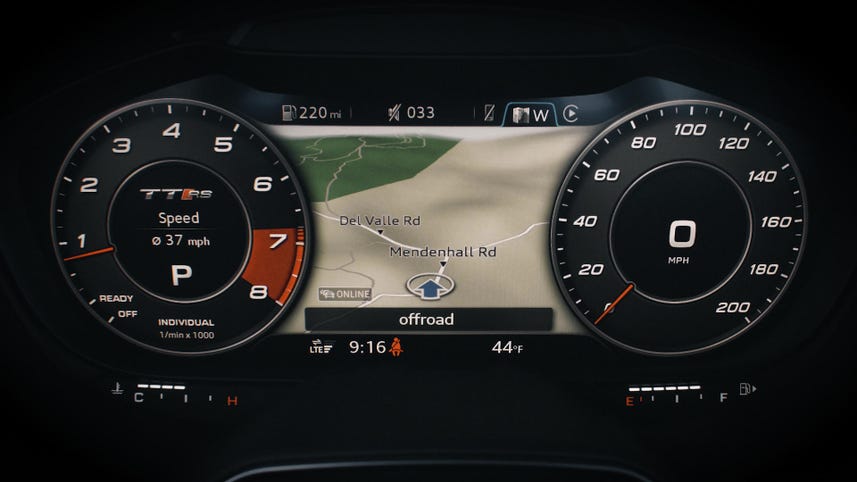 For my money, I'd forego the costly Dynamic Plus package. The fixed sport suspension means the ride will always be as stiff as a priest's collar; great for the church of the race track, not so much for the purgatory of my daily drive. The sport exhaust is also a no-go for me. A single button changes the tone of the exhaust, but it's not anything earth shattering. The five-cylinder engine is already a screamer and $1,000 to make it holler a bit louder isn't worth it.

What else should you be looking at in this segment? It's all about the Germans. A Porsche Cayman S is down by 50 horsepower but still has a strong 0-60 time and is offered with a six-speed manual, though it starts at a few thousand dollars more than the TT RS. The BMW M2 is more functional, comes with a manual and costs less than an Audi, though you don't get all-wheel drive.

The 2018 Audi TT RS starts at $64,900, but my kitted-out tester with everything but the Dynamic Plus package brings it all the way up to a cool $74,025. It's a seriously fun little whip, and one that'll do well in snowy climates thanks to its magnificent all-wheel drive. The only thing holding me back, besides the fact that it costs more than my graduate-level education, is the lack of a manual transmission. But if you're one to be satisfied by paddle shifters, the TT RS should do you just fine indeed. Even without a third pedal, this car consistently makes me giggle.