For long haulers and road trippers, there aren't many luxury SUVs that can match the cruising range and highway efficiency of the X5d.

The BMW X5 is, for now, the largest model in the automaker's lineup. More importantly, this one is a diesel, which means that it backs up its enormous girth with plenty of pound-feet of torque and more mpgs than most of its gasoline-powered siblings.

The 2017 BMW X5 diesel makes an impressive 413 pound-feet of torque, cruises at 29 mpg on the highway and can roll up to 560 miles between fill ups. The firm ride feels planted on the interstate and soaks up high-speed bumps well. iDrive 5.0 infotainment is better than ever and now features Apple CarPlay connectivity.

The numerous pricey options can quickly run up the sticker price. iDrive 5.0 doesn't play well with Android phones. The firm ride jostles quite a bit over bumpy surfaces at low speeds.

For those looking for a luxurious SUV for long commutes and road trips, there are few options that match the 2017 BMW X5 xDrive35d's range and efficiency.

Our example arrived coated in Space Gray Metallic paint — or, as I called it, MacBook Gray — a $700 option that foreshadowed two interesting details: This SUV works well with Apple products and the options are about to get really expensive. However, the most interesting thing about the 2017 BMW X5 xDrive35d is just how well suited this SUV is for long hauls and road trips.

Let's start with what makes the X5d, for short, fairly unique among its peers. A 3.0-liter turbocharged inline six-cylinder engine converts diesel fuel into a respectable 225 horsepower and an impressive 413 pound-feet of torque. That torque flows through an 8-speed automatic transmission — the only option available — to BMW's xDrive all-wheel drive system, where it's split between the four contact patches. All X5 diesels feature the xDrive system, but the gasoline variants can be in a rear-drive configuration.

One of the advantages of going diesel is having all of that torque available, which makes for quiet cruising at low engine RPMs and confident passing at highway speeds. It's like a tiny freight train engine.

The other diesel advantage is highway fuel economy. The X5 xDrive35d averaged 27.9 mpg during my highway-heavy week of testing. The EPA reckons a 29 mpg estimate on the highway and 25 mpg combined. That makes the diesel one of the most fuel efficient variants of the X5 chassis available; only the plug-in hybrid xDrive40e model is thriftier, but that's with regular recharges and a mostly urban driving cycle.

However, the diesel is the undisputed king of range, able to cruise up to 560 miles between fill ups — I drove nearly 300 miles during my testing and only just barely passed the half-tank mark — making it an excellent road trip option for those who don't like to stop for fill ups. It can't, however, do anything to help with stopping for bathroom breaks.

Likewise, the BMW's suspension feels like it was tuned for optimal highway performance.

The ride feels fine on a twisty road where its firm damping helps keep the car feeling flat and agile around corners. However, over bumpier substrates, the ride can feel a bit too firm. It's not quite harsh, but the X5 tends to roll over bumps in the road rather than soak them up like most SUVs. This translates to quite a bit of bouncing around in the seat on bumpier back roads.

However, at higher speeds, the dampers do a much better job absorbing the energy from the types of bumps you encounter on the highway — cracks in asphalt, expansion joints in cement and those obnoxious metal patch construction plates, for example — and the ride seems to smooth right out the faster you go. The firmness felt at low speeds also makes for a planted and stable feeling at high speeds during lane changes and emergency maneuvers.

One nit I have to pick is that the X5's seating position feels a tad tall for my preference. It was as if I was seated atop the "Ultimate Driving Machine" rather than down it. Yes, I realize that this is an SUV and a taller seating position is part of the package, but BMW has done a better job giving its smaller SUVs more of a cockpit feeling that I'd like to see here.

That said, the view from up there is, as they say, commanding. I can concede that for the average SUV driver visibility is more important than a cozy cockpit and the visibility is great for the X5 all around thanks to an airy greenhouse and well-placed pillars. That's likely why they're in an SUV and not a sedan — they're certainly not here for the offroad performance.

BMW's cabin design is top notch for this generation of vehicles and our optioned up X5 is no exception with excellent and varied use of materials on the dashboard that's just pleasing to the eye and to the touch.

What our specific example didn't have was much in the way of advanced driver aid tech, though quite a bit is available to X5 owners at the time of purchase.

Present was a $1,400 Driving Assistance Package that adds a rear camera and head-up display. That's pretty pricey and a little disappointing, considering that many economy cars are coming standard with rear cameras these days. We've also got BMW's $500 Park Distance control system, which adds front and rear proximity detection to the SUV's bag of tricks at very low speeds.

Not present, but available is the rest of BMW's driver aid tech, most of which you'll find in a $1,700 Driving Assistance Plus Package. Check that box and you'll gain lane departure warning, frontal collision warning with automatic braking and pedestrian detection. The package also includes blind spot monitoring and a surround-view camera system.

However, if you want adaptive cruise control, it'll cost you another $1,900. For the money, the system will maintain a safe following distance behind a leading car, even in stop and go traffic.

Front and center in the dashboard is the massive display of the iDrive 5.0 infotainment system. This new generation features more robust hardware and improved software with crisp graphics and smooth animations. The home screen now features a simplified six-icon layout that's easier to read at a glance.

The display is also touch sensitive now, but I mostly stuck to using the iDrive controller on the center console because it's familiar, well suited for the interface's design and keeps fingerprints off of the large and glossy 10.2-inch display.

iDrive is now better than ever before, but beyond the home screen, it's still the familiar iDrive interface that's been evolving slowing for generations. So, if you've always hated iDrive, you'll probably hate this only a little less. But if you like iDrive, you're gonna love this one.

You'll especially love it if you're an iPhone user. This generation of the infotainment software supports wireless Apple CarPlay and Siri Eyes-free when connected to an Apple smartphone and they work perfectly. Our example also included a wireless charging pad, which should work with the latest generation of iPhone, though I was unable to test and confirm. Apple loyalist can seamlessly hop in, drop their phone on the charging pad and go.

It's not so seamless for Android users like me. Android Auto is not supported, so I mostly had to make do with Bluetooth audio streaming — which periodically disconnected from my device and wouldn't reconnect until the end of the trip — and fumbling with my phone. There is an Android version of BMW's ConnectedDrive app, which allows for a wireless connection to car for in-dash control and communication of select apps such as Spotify and iHeartRadio. However, these app integrations were wonky and often either didn't work or froze. And, if your favorite audio streaming app isn't supported, you're back to fumbling with the phone and Bluetooth.

Watch this: BMW's iDrive 5.0 is better than ever, still not very Android friendly
03:20 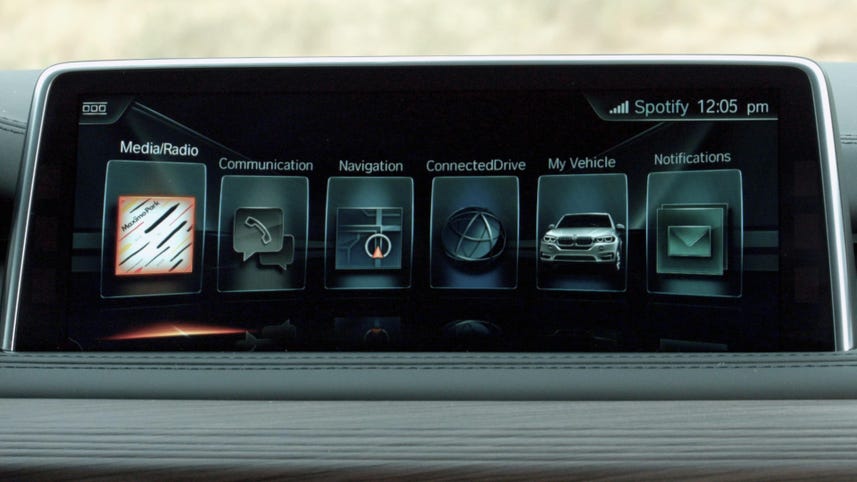 BMW's iDrive 5.0 is better than ever, still not very Android friendly
3:20
Watch Now

The 2017 BMW X5's spacious comfy cain and planted freeway performance make it an excellent commuter and a great road trip vehicle. The diesel version is even better suited to those tasks with its torquey performance and very respectable fuel economy and range. About the only thing that gives me pause is the price.

More specifically, I'm annoyed by the pricing structure. I already griped about paying extra for a rear camera, but I was also miffed by $300 for Apple CarPlay connectivity, $650 for ceramic controls and the general high cost of the various options packages.

The X5 xDrive35d starts at $60,400 — already a $1,500 premium over the gasoline xDrive35i model — but we're pushing over $73,000 as equipped and we don't even have most of the driver aid tech, the optional third row seating or any of the performance enhancing handling upgrades. I get that this is a luxury sedan and you have to pay to play, but BMW's nickel-and-dime options list just rubbed me the wrong way.

If you're looking for a luxury SUV that's also a diesel, the X5d is a solid choice. Its small price premium will pay for itself within a few years, less if you take many road trips. Interestingly, the X5 may soon be one of the only luxury diesel SUV options with most of the X5's competition from Audi, Benz and others is moving to plug-in hybrids for their eco-SUV options. Even BMW is looking to plug-ins for the future with its upcoming X7 PHEV SUV flagship.

If you're mostly an urban dweller that doesn't make many intra-city excursions, perhaps a PHEV like the Volvo XC90 T8 or even BMW's own X5 xDrive40e PHEV may be a better choice. And if you're looking for more balanced infotainment tech — maybe you carry an Android phone — the Audi Q7's MMI infotainment and virtual cockpit may be a better match. However for luxury long haulers, there's not much that can match the cruising range and highway efficiency of the X5d. 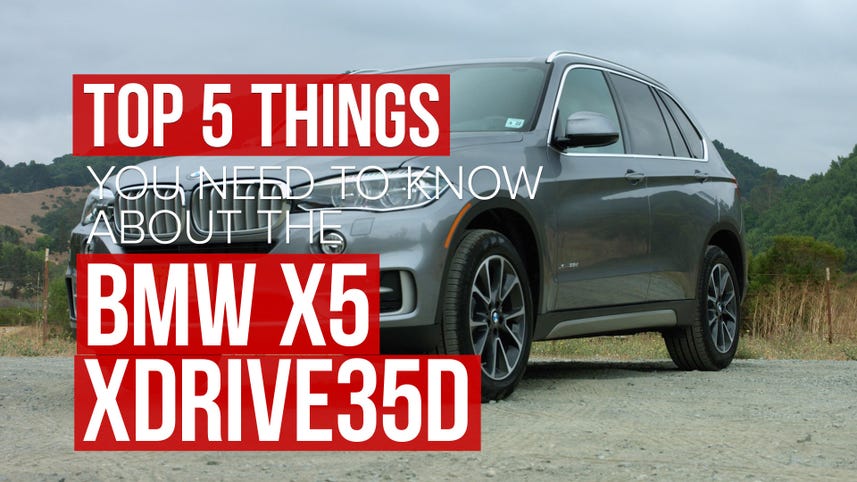