2018 Audi A5 Sportback review: The best of all worlds

The high-tech Audi A5 Sportback blends the slick roofline of a coupe, the spaciousness of a sedan and the functionality of a hatchback into one handsome package.

You could call the 2018 Audi A5 Sportback a baby A7. You could call it Audi's answer to the BMW 4 Series Gran Coupe. But I call it my favorite model in the very solid A4 and A5 lineup.

The 2018 A5 Sportback blends the capacity of a wagon with the style and dynamism of a coupe, and Audi's tech continues to be the best in class. The Sportback corners with grin-inducing agility.

Engine noise has an artificial, video game feel to it thanks to an over-reliance on sound generation. Rear seat headroom is limited.

The Sportback is an excellent addition in the A4 and A5 lineup, blending all of the best parts of the series into one attractive package.

The A5 Sportback is built on the same bones as the A5 Coupe and A4 Sedan -- a nicely tuned, sporty platform. And while this genre-bender (or genre-blender) isn't without its compromises, after a week behind the wheel, I'm convinced that the 2018 Audi A5 Sportback is much greater than the sum of its parts.

The additional stuff-hauling space added by the Sportback expands cargo capacity to as much as 35 cubic feet when the rear seats are folded flat, enough for a decent Costco run. Perhaps more useful is the enlarged rear aperture made possible by the power opening liftback with hands-free kick-to-open functionality. This enables easy loading of bulky items, making the Sportback good for Ikea runs, too.

Check out the curvaceous and capacious 2018 Audi A5 Sportback

There are, however, trade-offs and compromises to consider. The more dramatic roofline cuts into second-row headroom by about 1.5 inches, which is something to keep in mind if you often shuttle tall passengers. The additional rear glass and power liftgate mechanism also add about 100 pounds to the curb weight compared to an A4 Sedan.

Still, the A5 Sportback's added style and functionality feels absolutely worth the $2,100 price premium over a comparable A4 sedan.

The Sportback's engine bay is home to a familiar engine: Audi's 2.0-liter turbocharged four-cylinder that powers both the A4 sedan and A5 coupe. Output is rated at 252 horsepower and 273 pound-feet of torque, and low-end grunt is plentiful, making off-the-line launches and midrange acceleration easy as pie.

The engine is mated to a seven-speed dual-clutch automatic transmission, the only gearbox available to Sportback buyers. Audi's S-tronic gearbox is really sweet, with smartly chosen shift points aiding in quick acceleration and a smooth overall demeanor. It can be a bit hesitant to downshift when slowing for a corner or while passing, so you'll want to make use of either the Sport shift mode or the standard steering-wheel-mounted paddle shifters when it's time to really have fun.

At it's sportiest, the Sportback is good for a 0-to-60 sprint in just 5.7 seconds, and it'll carry on to a top speed of 130 miles per hour. At its most efficient, you're looking at 24 miles per gallon city, 34 mpg highway and 27 mpg combined.

My one complaint about the A5 Sportback's powertrain is the very artificial sounding engine note; it's a bit too Forza Motorsport for my liking. Audi uses the stereo system to generate faux exhaust sound in the sportier settings. Were this my personal A5 Sportback, I'd find the fuse for that system and yank it straight away.

The track and tuning of the Sportback's four-corner, five-link independent suspension is closer to that of the A5 Coupe than the A4 Sedan. This grants the five-door a more planted and stable feel in the corners.

An optional active damper setup allows drivers to toggle between comfort for commuting and increased firmness during more spirited passages. My Premium Plus model doesn't have that option, so I can't tell you much more, but the fixed suspension feels plenty fine for my needs. No matter the model, Audi Drive Select lets you dial in how much cushion or sportiness you want. You can toggle between Comfort, Auto and Dynamic modes, as well as a fourth customizable Individual preset that can mix and match specific drive settings.

Standard on all Sportback models is Audi's wonderful Sport Quattro all-wheel drive. Not only does this aid in surefootedness when traction is lowered by weather, but this sportier Quattro tune features a rear biased 40:60 torque split and torque vectoring on the rear axle. This helps scoot the rear end around while cornering, keeping the chassis neutral and preventing understeer -- a common trait of many AWD setups. This also means you can get back on the power nice and early while coming out of a corner. Such fun!

On the highway, the A5 Sportback can be blissfully quiet and comfortable, especially in drive modes that shut off all of that artificial engine noise nonsense. It's a very well-rounded daily driver.

MMI Plus tech with Virtual Cockpit

Part of what makes the A5 Sportback such a great daily tool is its onboard technology. Audi's interior tech is second to none.

The standard MMI infotainment suite uses a 7-inch Nvidia-powered setup controlled by a physical control knob on the center console. Standard Android Auto and Apple CarPlay connectivity lead a beefy list of digital and analog media sources. However, upper trim levels and option packages bump us up to MMI Plus with a 8.3-inch larger screen, navigation and an MMI Touch controller with handwriting recognition. 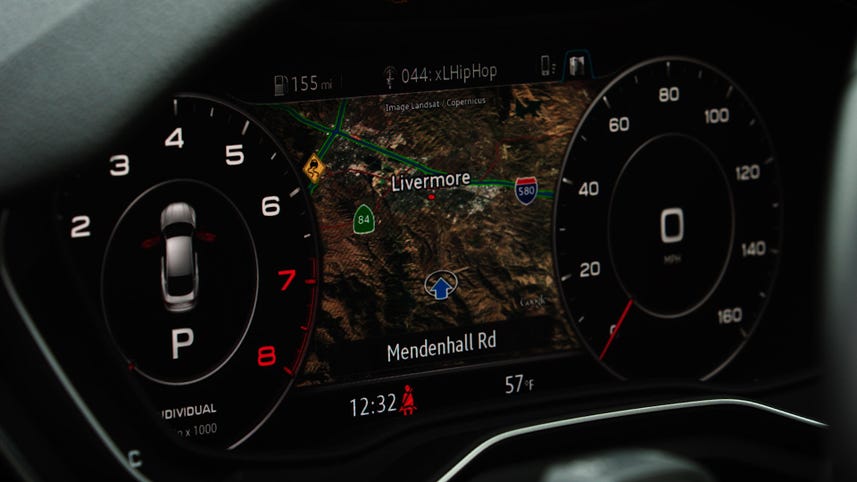 And that's not even the coolest part. My personal favorite tech upgrade is the Virtual Cockpit, a 12.3-inch digital instrument cluster display that can be customized to display everything from traditional gauges and driving information to a large map for navigation. Pretty much all of the major MMI infotainment functions can be handled here with simple steering wheel controls, making Virtual Cockpit a feature worth paying for.

For starters, the Audi Pre Sense City system is standard equipment on all models, rolling in forward pre-collision warnings with automatic brake assist. The system is able to detect both other vehicles as well as pedestrians.

Optional upgrades worth considering include adaptive cruise control with traffic jam assist, which not only maintains a safe following distance in stop-and-go traffic, but also adds steering assist that automatically keeps the vehicle in line with the car ahead and between lane markers. This is a hands-on system, though, which will disable if you try to go hands-free.

At higher speeds, more familiar lane-keeping steering assist helps keep the car where you want it, but doesn't attempt the same level of lane-centering that the low-speed system does. It just keeps you between the lines.

Audi's blind-spot monitoring system is an interesting one. Not only does it watch your back during lane changes and when you're reversing out of blind parking spots, it also remains active after you've parked roadside to monitor for upcoming cars. This vehicle exit assist system is extremely helpful for preventing dooring other cars and potentially cyclists. It's a small touch that goes a long way for safety.

The 2018 Audi A5 Sportback starts at $42,600, and the midrange Premium Plus model adds a few more driver aid features, along with various other bells and whistles, for $45,600. Folks looking for the absolute best tech will want to opt for the top-tier Prestige model. It starts at $51,175 (including $975 for destination), but that extra dough gets you Virtual Cockpit, a head-up display, MMI Navigation Plus, a Bang & Olufsen sound system and a surround-view camera.

But the Audi A5 Sportback isn't just a better bargain. As far as I'm concerned, it's a better all-around car.