The latest Impreza gets new underpinnings for tighter handling, but the Starlink infotainment system could use some work.

I was charging hard in the 2017 Subaru Impreza hatchback down the 580 freeway, in Oakland, California on my way to Roadshow HQ in San Francisco. It was late-morning and I foolishly thought I would avoid the notorious back-up at the Bay Bridge. Yeah, not a chance. Red lights blazed in front of me and before I knew it, I was down to a creep at 10 miles an hour. I hopefully pushed the adaptive cruise control button, but didn't expect it to engage at such a slow speed.

Standard all-wheel drive, a roomy cabin and an excellent stop-and-go adaptive cruise control system take the Subaru Impreza to the top of the class. Apple CarPlay and Android Auto are standard.

The interior is just OK, and the Starlink infotainment system lacks functionality.

The Subaru Impreza is an affordable and functional hatchback (or sedan) that's great for sporty folks who regularly have to deal with snow or rain.

Wonder of wonders, the camera sensors focused on the car in front of me, and as it slowed to a stop, so did the Impreza. A brief stop, and then the Impreza moved forward on its own, faithfully tracking the car ahead, creeping through the Bay Bridge toll plaza and letting me enjoy my podcast relatively stress-free.

The rest of my week with Subaru's Impreza was just as surprising, but the surprise went both ways. The sporty handling was an unexpected eye-opener, but I was taken aback by the underwhelming dashboard electronics.

The 2017 Impreza is built on Subaru's New Global Platform, which makes it a bit longer and wider, but the increase in size doesn't increase the weight. The chassis is 70 percent stiffer than the outgoing model's, and the engine got a bit of a kick as well with the introduction of direct fuel injection. With revised steering and suspension, the 2017 Subaru is quite different from the previous generation.

Subaru offers the Impreza as a sedan, but most folks take the five-door hatchback. With just over 55 cubic feet of space with the rear seats folded, the hatch offers a ton of utility. Neither the Mazda3 nor the Ford Focus can match the Impreza in overall cargo space. However, when those rear seats are folded up, the space drops to 21 cubic feet. Again, nothing to sneeze at, but that's less than the Volkswagen Golf SportWagen. For 2017 the tailgate has been redesigned with a split taillight housing to offer four more inches of width across the fifth door opening. the better to load up all your outdoors-y gear like bikes or kayaks.

The cabin is roomy enough for five full-size adults, even in the rear middle seat. Subaru has a reputation for building, let's say, practical interiors, and while the Impreza is greatly improved, it doesn't match the Mazda3 or Golf SportWagen in sophistication. There are four trim lines to choose from, Base, Premium, Sport and Limited. My car, in Premium trim, came with cloth seats, but they were amply heated and comfortable. Materials are of good quality, but the faux carbon-fiber trim is a little much.

Standard all-wheel drive makes the Impreza popular with folks who have to deal with inclement weather on the regular.

Under the hood is the same 2.0-liter, four-banger as before, but thanks to a few slight revisions, it puts out 152 horsepower, up from 148 in 2016. Torque remains the same at 145 pound-feet. If you're looking for more power, the Mazda3 does much better with an available 184 horses, but the Impreza is just about in line with the Chevrolet Cruze and the Ford Focus.

2017 Subaru Impreza is all new, we swear

Subie can lord its all-wheel drive prowess over most of the similarly priced competition. While the price may be right, Mazda, Chevrolet and Ford offer only front-wheel drive hatches. You could look to the Mini Countryman or Clubman or even the Volkswagen Golf Alltrack or Sportwagen, but be prepared to pony up a few thousand dollars more.

Taking it to the streets

I took the Impreza to my super-secret testing location in the hills of the East Bay in Northern California. The previous generation was a fine vehicle, but it wasn't much fun or very engaging. While the new Impreza isn't really a twistie attacker, it felt more aggressive with its faster steering ratio lifted out of Subaru's sporty BRZ model. A few of the turns in my proving grounds are quick and sharp, but the Impreza stayed composed and planted, thanks to that stiffer chassis. Direction changes can happen quickly without the car getting too upset, and with the all-wheel drive helping to drive the correct amount of torque to the front or back at exactly the right instant, the Impreza does indeed impress.

A five-speed manual transmission is standard on the base and Sport models, but the Limited and Premium trim lines are only available with a continuously variable transmission. (The CVT is an option on the base and Sport models.) My tester came with the CVT, which is not my favorite way to get power to the pavement, but Subaru has refined the transmission so that's it's not quite as noisy as last year. The Premium model has paddle shifters so drivers can shift the CVT through seven step-like gear ratios. It puts a bit of fun back into the equation, but those who enjoy driving should opt for the manual gearbox.

If you're a tech-nerd, and we assume you are since you're here on Roadshow, you'll be disappointed by the Starlink infotainment system in the Premium trim Impreza. The small 6.5-inch touchscreen is responsive enough, but it offers just the basics, like iPod connectivity and Bluetooth for audio streaming and hands-free phone usage. Aha and Pandora app integration is also included. The good news is that Apple CarPlay and Android Auto are both standard, which makes up for Starlink's lack of features. I thought the Apple CarPlay interface would be cramped on the smaller screen, but I had no trouble accessing the buttons.

Watch this: Deep dive: Subaru Impreza gets Apple CarPlay, Android Auto and not much else
01:50 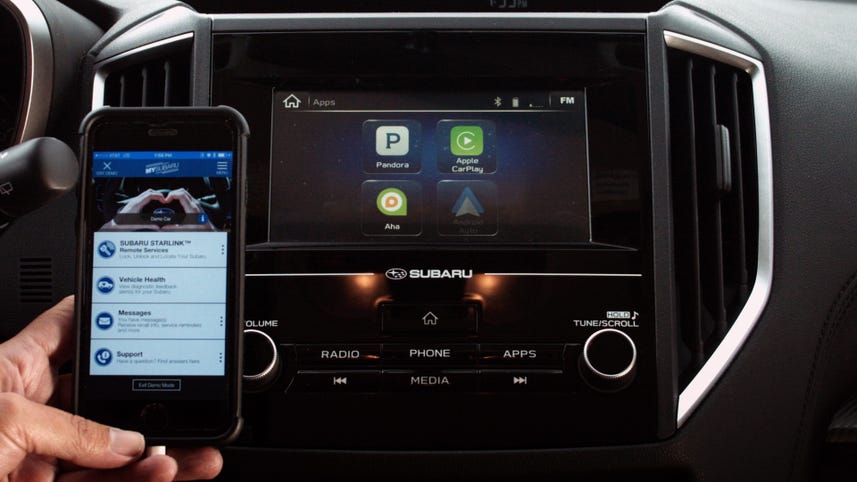 Deep dive: Subaru Impreza gets Apple CarPlay, Android Auto and not much else
1:50
Watch Now

Move up to the Sport or Limited trims and you can get satellite radio and apps like iHeartRadio, Magellan Navi and the location-sharing app Glympse, all on an 8-inch touchscreen. The upper trim levels also get six speakers, a single-disc CD player, voice-activated controls and hands-free text messaging. As for built-in navigation, that's only available as an option on the top-of-the-line Limited trim.

All eyes on Subie

All driver's aids are optional as part of Subaru's EyeSight package. Subaru's system uses stereo cameras that allow for a long and wide range of detection. The housing is located inside the car on the windshield, so the risk of damage is less than in cameras integrated into the car's bumper. The adaptive cruise control mentioned earlier is better than many manufacturers', which won't let you set the cruise control at speeds less than 25 mph, making it useless in stop-and-go traffic. Additionally, the Subaru system stays engaged for a count of three when the car comes to a stop. Anything more than that requires a quick flick of the "Set" button, and the Impreza is back to taking the stress out of your commute.

EyeSight also includes lane-departure warning with an audio and visual alert if you stray from your lane. A lane-keeping assist is supposed to gently steer you back into your lane, but the steering force is so light I never felt it kick in. A blind-spot-monitoring system is also in play with lane-change assist. An indicator flashes in the side mirror if it senses a vehicle quickly approaching in a neighboring lane while you signal for a lane change.

Finally, the Impreza's rear cross-traffic alert is joined by a new automatic braking system, so say good-bye to those parking lot mishaps.

The 2017 Subaru Impreza starts at just over $18,000 for the base sedan. My five-door Premium trim test model starts at $21,695 but with the EyeSight technology and destination, that jumps to $24,910. A comparably equipped Ford Focus or Chevrolet Cruze are both available in a hatch and similarly priced, but neither have adaptive cruise control, to say nothing of all-wheel drive. When a front-wheel drive Mazda3 hatch with the same safety features is nearly $29,000, the Subaru Impreza is starting to look like the hatch to get.