2017 Chevrolet Bolt EV review: The best EV you can buy this side of Tesla

238 real-world miles per charge, a flexible design, and (mostly) smart tech at a price that normal drivers can afford.

It should be obvious from the fancy Editors' Choice badge up there next to its score, but the 2017 Chevrolet Bolt EV is my favorite new electric car. This smartly designed compact boasts a spacious cabin, decently flexible storage space and very forward-looking dashboard tech that gives me everything I need from infotainment, and nothing that I don't. And I haven't even gotten to the range!

The 2017 Chevrolet Bolt is good for 238 miles of EV cruising range. Its e-motor boasts solid around-town torque and performance. Android Auto and Apple CarPlay are standard. Plus, the Bolt does it all with an affordable price tag.

Lack of onboard tech means there's no way to search for charging stations from the Bolt's dashboard. There's not a lot of advanced driver-aid technology available for this first generation.

The 2017 Chevrolet Bolt is an extraordinary EV built for ordinary people with class-leading range that nearly eliminates range anxiety and a price tag that most people should be able to afford.

Its EPA-estimated 238 miles of cruising range per charge is currently second only to the Tesla Model S -- a rival with a starting price that's more than double that of the Bolt's approximately $30,000 post-incentive starting price. Relative to the Model S, the Bolt's not just a good EV, it's an amazing value.

The Bolt will face stiff competition from the more appropriately matched Tesla Model 3 soon, but for now the Bolt reigns supreme as the king of the attainable EVs.

The everyday EV with everyday range

The heart of a traditional car is the engine, but it's all about the battery when you're talking EVs. The Bolt's battery is a 960-pound, 60 kWh lithium-ion pack located in the floor beneath the seats. This configuration gives the Bolt its elevated seating position; the car's passengers sit about a head taller than they would in, say, a Chevy Spark. It's for this reason that Chevy feels it's OK to call the Bolt a crossover rather than a hatchback.

Watch this: Five things to know about the pure electric Chevrolet Bolt
01:21 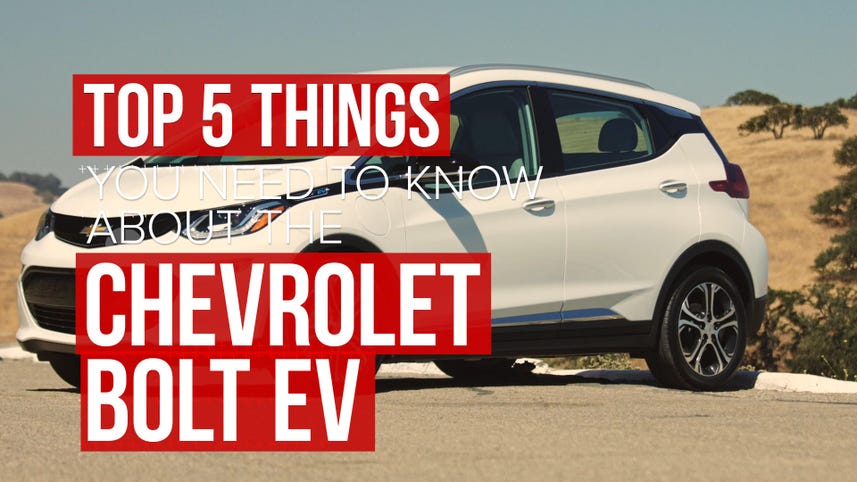 This EV crams electricity into that battery pack via a 7.2-kW onboard charger that, when connected to a 240-volt home or public charging station, adds about 25 miles of range per hour on the plug. So, from flat, the Bolt takes a maximum of 10 hours to charge.

If you're in a rush, an optional DC Combo Fast Charging system can rapidly juice up the battery to 90 miles of range in just 30 minutes. (After that initial boost, DC Fast chargers revert to the slower standard charging speed.) With 238 miles of range to work with, I never ran into a situation where I needed an emergency fast charge, but I'd still recommend this $750 option, as it adds a lot of convenience and flexibility for very long trips.

I should note that the Bolt comes standard with a 120-volt trickle charger that plugs into a standard home wall outlet, but it's only really useful for emergencies, with an extremely slow charging rate of about 4 miles for each hour plugged into the wall.

All those kilowatt-hours of electricity the Bolt stores are used to power its electric motor, a 150-kW (about 200 horsepower) unit that sends up to 266 pound-feet of torque to the front wheels via a single-speed reduction gear. That much instantaneous torque in a car this size gives the Bolt very responsive performance at low speeds and a peppy around-town feel. Floor it and the 3,580-pound hatchback will do an eerily silent, sub-7-second 60 mph sprint (though that's obviously not how you want to drive to reach the full 238-mile range at an EPA-estimated 119 mpge).

The Bolt's suite of available driver-aid technology is solid, but not nearly as advanced as you'd expect from a car with such a high-tech powertrain.

In our loaded-up Premier model with all of the bells and whistles, there's a Surround Vision system. This evolution of the rear camera stitches together feeds from four strategically located cameras to provide a 360-degree view of the area around the car at low speeds. This sort of bird's-eye view is very helpful when squeezing into tight spots, but it's perhaps not as impressive as an auto-steering parking system would be.

An optional Driver Confidence package adds lane-keeping assist, which uses the electric power steering to help keep the Bolt between lane markers at highway speeds. The package also brings with it a forward pre-collision alert system with low speed automatic emergency braking. The system can even detect and brake for pedestrians. However, while the Following Distance Indicator can let you know when you're too close behind the car ahead, there's no adaptive cruise control option that can automatically maintain a safe cruising distance for you.

A load-out like this would be impressive if we were talking about a Spark or Sonic, but EV buyers tend to be more savvy and have higher-tech expectations, so lacking gee-whiz features like adaptive cruise or automatic parking is a bit of a bummer.

Chevrolet is using the Bolt in its own autonomous car testing, so hopefully we'll see these features added in future updates and model refreshes. Especially if the Bolt wants to remain competitive when the Model 3 arrives. 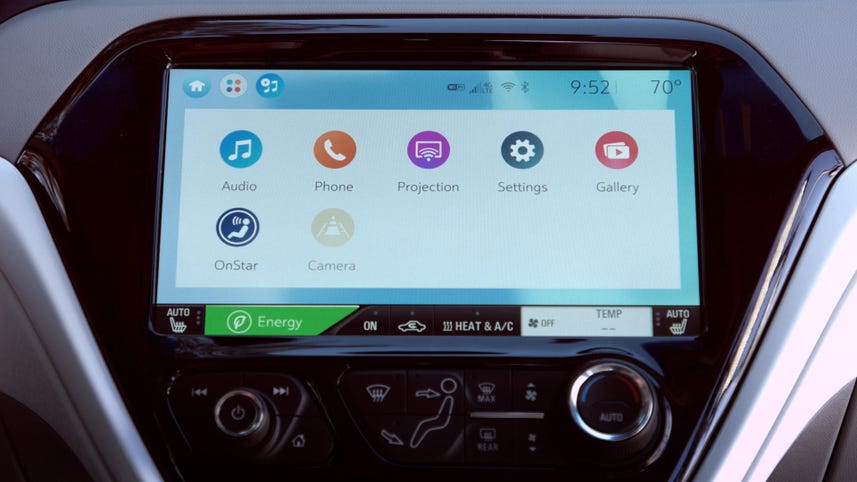 Nearly all of the Bolt's interior design details deliver a spacious and airy feel, from the high roof, to the inclined dashboard, to the thin, suspended construction of the front seats which frees up extra legroom for backseat passengers.

Front and center on the Bolt's dashboard is the large 10.2-inch color touchscreen display that serves as home to a unique version of Chevrolet's MyLink infotainment system. The software here has been stripped down to the essentials. There's still onboard satellite and terrestrial radio, Bluetooth calling and audio streaming, plus USB connectivity for audio playback, but there is no onboard navigation or even the option to add it.

Instead, Chevy has leaned heavily on the smartphone to fill in MyLink's functionality with standard Android Auto and Apple CarPlay connectivity. Why pay for navigation when you've already got a phone in your pocket, right? These smartphone mirroring technologies also bring audio streaming, communication and messaging apps into the dashboard. Chevrolet is betting that the sort of tech-forward drivers who are the Bolt's market will find this phone-centric tech preferable to more conventional models.

However, this pared down approach to tech brings a few unexpected drawbacks. With no onboard maps, there's no way to, for example, search for or navigate to charging stations from the Bolt's dashboard, and neither Android or Apple's software offers a solution.

If I wanted to find somewhere to charge on the road, I'd have to pull over, unplug my phone, open Chargepoint and find a station. Then I'd have to set that station as a destination in Google Maps, plug my phone back in and resume navigation with Android Auto. That's just too much work.

There is an onboard OnStar 4G LTE data connection that can be used as a portable Wi-Fi hotspot, but it's mostly there for remote monitoring and telematics control of the EV via Chevrolet's MyLink app for smartphones and smartwatches. Here, you keep an eye on the battery state, charging behavior and recharge scheduling of the Bolt from afar. You can even remotely lock or unlock the doors, activate climate controls to precondition the cabin temperature with power from the grid, and more.

In a pinch, you can even take advantage of OnStar for turn-by-turn navigation and concierge services if, for example, you smash your phone and need directions home.

On two separate occasions now, Roadshow staff have stretched the Bolt's legs and tested the limits of its range.

Last year, Editor-in-Chief Tim Stevens piloted the EV on a 240-mile journey from Monterey, California to Santa Barbara along Highway One, the Pacific Coast Highway. In Stevens' own words, there was:

"No babying the throttle, no hypermiling, and no lifting and coasting at any opportunity. I just drove. That means I used the AC when I wanted it (most of the time), didn't glide along well beneath the speed limit and, when a rare passing opportunity appeared, I put my foot right to the floor and took it."

Watch this: Chevy Bolt range test on California's Highway One
06:42 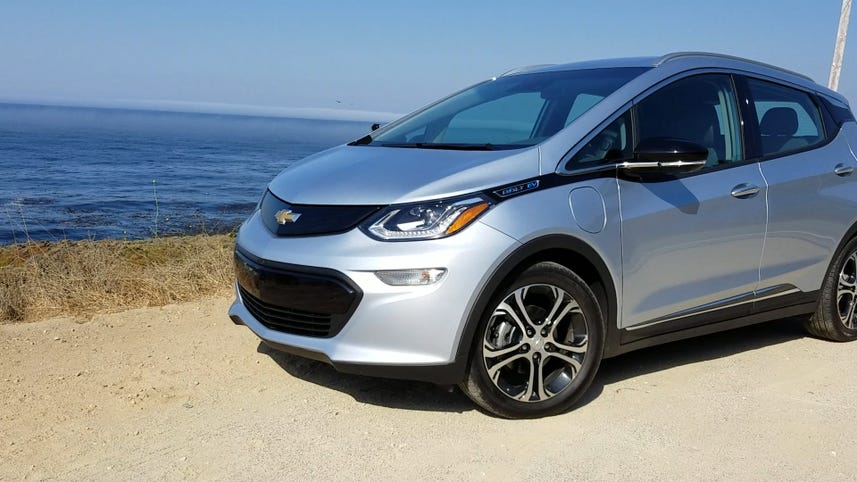 The Bolt responded with "rewarding" acceleration and torque and decent handling, even with the low grip limits of the eco tires. Stevens finished the 240-mile odyssey with a whole 17 miles left in the tank, er, battery pack just driving it like the "fun little car" that is is.

More recently, I personally spent a long week behind the wheel of the Little EV That Could. I took the Bolt on a long, 300-mile-plus lap of the Bay Area, roaming from San Francisco down to San Jose, up to Napa -- where the EV recharged over lunch -- and back to Roadshow's SF HQ via the Golden Gate Bridge. (You'll hear more about that driving challenge in a separate piece soon.)

With that road trip behind me, I spent the rest of the week just running normal errands, sitting in traffic and commuting in the Bolt. I was most amazed with how its deep power reserve changed the way I treated the electric car. I was able to just drive it places and park it without having to worry about plugging it in at the end of every trip. If I showed up and the EV charging stations were full, it was no big deal; I was able to recharge the car at my convenience rather than bending my schedule to the car. It was tremendously freeing and confidence inspiring.

Stevens noted in his evaluation, and I should note here as well, that testing the Bolt at moderate speeds in sunny and mild Northern California is about as ideal a set of conditions as you can get for the EV. Colder weather will mean less range, and consistent driving at higher speeds will also hurt efficiency.

Ready for the mainstream

The 2017 Chevrolet Bolt starts at $36,620 for the base LT model, but my fully loaded Premier model comes as tested at $42,635. That's before adding an $875 destination charge, but also before subtracting the available federal and state rebates and incentives (up to $7,500 Federal and $2,500 California).  The base model's bottom line could end up well below $30K if you get all the breaks available.

That's a ridiculous value, especially when you consider that the only other 200-plus mile EVs you can drive away in today are the Tesla Model S or X, significantly larger and more high-tech cars than the Bolt but with price tags that are nearly twice as hefty, too. Until the Tesla Model 3 becomes widely available, there's simply no EV on the market that can match the Bolt's mix of cruising range and attainable price.

The everyday EV is finally here, and it's ready for the mainstream.