If you're capable of looking past its "Made in China" window sticker, the Envision gives you old-school comfort with new-school edge.

Buick exists in a space that is neither mainstream nor luxury. Its middle-of-the-road pricing slots it into what can best be described as a near-premium segment, where everything gets a bit fancier without commanding huge prices.

The Envision gives a soft ride over rough roads, and its technological complement is everything a suburban warrior will need.

The Envision's 2.0-liter engine wages a constant battle between forward motion and efficiency and it can get expensive in a hurry.

The Envision is a competent, comfortable conveyance for families with a little more coin to drop than average.

The Envision is the latest entry in this field, and boy howdy, the field of two-row, decently priced crossovers is already quite thick. But the Envision carves itself a nice little niche, thanks to its comfortable ride, impressively peppy optional engine and a veritable panoply of tech that GM has been wise to shove into as many vehicles as possible.

General Motors debuted the Envision in China, where it's sold like gangbusters since 2014. Now, it's here in the US, because it smartly fills the gap between Buick's subcompact Encore and the full-size Enclave. After spending some time with the Trishield's latest crossover, it's not perfect, but I think it'll fit in just fine.

Anonymous look outside, not quite German inside

The Envision isn't going to win any beauty contests, unless the contest is "Easiest Vehicle to Lose in a Mall Parking Lot." To my eyes, its styling is ho-hum, with large light fixtures bucking the recent trend of slimming everything down as much as possible. Our tester made its best attempt to look forward with LED running lights, but the whole design feels rather anonymous in the face of sharper competitors like the Acura RDX, Audi Q5 and BMW X3.

Speaking of lights, the side-mirror turn indicators are bright enough to confuse low-flying aircraft, likely an effort to ensure owners don't leave the things on for a mile and a half straight.

The Envision's interior ratchets the excitement up a notch. Cabin materials are easy on both the eyes and the fingertips, although the feel isn't quite up to German spec (then again, neither is the price, so that's hardly a sin). The leather in my tester was plenty comfortable over many long trips, and the seats and steering wheel both heated up quickly -- great for folks in winter climes, not to mention journalists sitting in a running car between video takes in 20-degree temps.

The Envision's dash and instrument panel have a solid mix of old- and new-school touches. My top-trim Premium II tester arrived with a multifunction screen in the gauge cluster, and the infotainment screen lives just above an array of secondary controls. Beneath that, HVAC controls are largely physical switchgear, save for a pair of annoyingly gimmicky touchpad temperature adjusters that work only when presses are long and deliberate.

Space up front is ample, and the story is the same in the second row -- for occupants at or under the 6-foot mark, at least. Anyone taller than 6-foot dead will find rear headroom to be slightly lacking.

More cabin tech than you can shake a stick at

GM has done a commendable job introducing a whole bunch of center-stack tech to its vehicles lately, whether it's a Chevrolet Cruze or this here Envision. The star of the show is an 8-inch touchscreen running Buick's IntelliLink system, which is basically the same as Cadillac's Cue and Chevrolet's MyLink. Both Android Auto and Apple CarPlay are standard, which is a nice touch.

The infotainment screen serves up your average array of connected services, including a Weather Channel app that showcases local radar maps and forecasts. SiriusXM-based traffic and weather apps are also available. Data junkies will enjoy GM's ubiquitous 4G LTE hotspot, which did a good job of covering gaps in my phone's LTE coverage around Greater Detroit. A trial is free, but a subscription is required beyond that.

If the one screen isn't enough, don't worry, there's another one in the gauge cluster. The traditional analog speedometer straddles a portion of the screen that can display music information, a small version of the nav system's map or settings relevant to that specific screen. An optional head-up display brings yet another screen into the fray, and like other systems of its kind, I found it helpful in keeping my eyes on the road.

Ride quality is where the Envision shines. Its suspension tuning errs on the soft side, soaking up bumps and transmitting very little to the occupants. It's significantly more comfortable than its German or Japanese competition, although that pillow-like tuning can lead to occasional bouts of floatiness on the highway, which is less desirable.

One part of the drive that genuinely surprised me was the Envision's engine. My tester packed the optional four banger, a 2.0-liter turbocharged unit good for 252 horsepower and 260 pound-feet of torque. Mated to a six-speed automatic and all-wheel drive, the Envision exhibited proper hustle, but the engine was never noisy when the revs climbed.

The rev-happy engine makes it tougher than usual to meet EPA fuel economy estimates, which are 20 mpg city and 26 mpg highway for this specific model. A light foot will nail 26 mpg city with effort, but I had a hard time staying anywhere near 20 mpg in the city -- for me, it was closer to 17 or 18 mpg.

I'll return to the single most annoying part of the Envision's drive experience for a moment, and that's still the damned turn signal. In addition to being overly bright, it's loud to the point where it's genuinely bothersome. Its volume is presumably to keep Buick's bread-and-butter elderly buyers from leaving it on for a week straight, but really, does it need to be that loud?

How I'd option it

The Envision can get expensive in a hurry. My tester, a fully loaded Premium II model, is pushing $50,000 before tax and title. For my money, that's entirely too much, considering 50 large will get you a proper luxury crossover in this size. But with a starting price of about $35,000, there's room to find a more appropriately priced model.

I consider the 2.0-liter engine a requirement, as the naturally aspirated base engine is basically dead below the waist. But you can bring the price down to $43,000 by opting for Premium I trim, which cuts out ventilated seats, the head-up display, navigation, HID headlights and automatic high beams. I'd also ditch the $1,500 panoramic moonroof.

If navigation is a requirement, you can add it piecemeal for $495. You can get away with Apple Maps or Google Maps without that upgrade, though, because CarPlay and Android Auto are standard even with the non-navigation infotainment system. That leaves you with a comfortable, capable ride for right about $44,000 before incentives. That strikes me as a bit more appropriate. 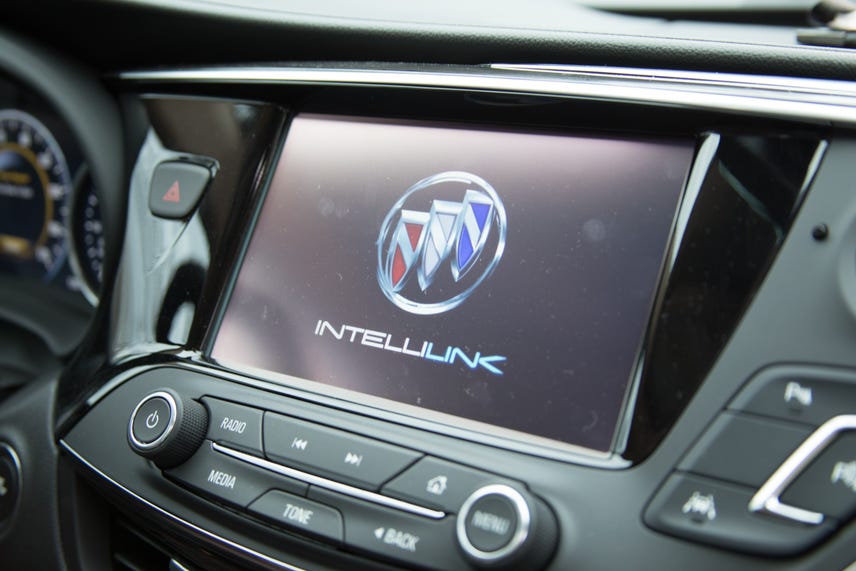 Walking through the tech in the 2017 Buick Envision
2:07
Watch Now

If you were to compare the Envision against the massive wall of every other two-row crossover on the market, we'd be here for days, and I could probably publish a book on the findings. To that end, I've whittled down its main competitors to the Acura RDX, Audi Q5, BMW X3 and Lincoln MKC.

The Envision's Premium II arrangement is slightly more expensive than comparable trims for competitors. It comes in just above the MKC Reserve ($42,055) and the RDX Advance ($43,820), both of which are also fully loaded models. It sneaks in just below its German competitors, both of which also pack upgraded engines, but that's before you start piling on options. At that point, the Bimmer and Audi get expensive, in a hurry.

Despite having something of an old-tech transmission, this Buick's fuel economy vies for top billing. Its 20 miles per gallon city and 26 mpg EPA ratings surpass the MKC (19/25) and trades off with the RDX (19/27). Its highway rating is identical to the Q5 and X3, but its 20-mpg city figure bests the X3's 19 mpg and the Q5's 18 mpg.

It fares... well enough in cargo space. The Envision can store 26.9 cubic feet of junk in the trunk, expanding to 57.3 with the second row down. That beats the Lincoln MKC's figures of 25.2 and 53.1, and... that's it. It ties the Q5 with the second row down, but the Q5's normal storage capacity of 29.1 cubic feet comes out on top. The opposite is true for the RDX. The X3 crushes the Acura in both figures.

When it comes to equipment, the Envision is about on par with the MKC and RDX in the trims described above, and it's far better equipped then either German for the same price. The only place where the Envision truly falls short on all accounts is speaker count, but that's hardly a deal breaker.

Thus, the Envision does really live in a sort of middle zone. Against its Japanese and American competitors, it helps shine through with a supple ride and decent fuel economy from its optional engine. It might not offer the handling panache or the valet-stand gravitas of the German brands, but for the price, it's hard to get the same level of equipment from the Teutonic competition.

If what you're after is a comfortable ride for up to five, with a technological loadout that isn't embarrassingly 20th century and a look that's anonymous enough to keep you from being called "flashy," Buick's Envision is a solid way to go.