No LTE, no Wi-Fi, no problem. Here’s why you’ll want it anyway.

Andrew is CNET's go-to guy for product coverage and lead photographer for Europe. When not testing the latest phones, he can normally be found with his camera in hand, behind his drums or eating his stash of home-cooked food. Sometimes all at once.

As someone who owned and loved the original Nokia 3310, I'm happy about the return of this new 3310, and I've enjoyed having it back in my life. But let's get one thing clear: it is not going to replace your iPhone, Samsung phone or any other smartphone you already have.

No Wifi or apps means that you won't have access to almost any of the modern features we've come to expect from smartphones.

The Nokia 3310 won't replace your iPhone, but this dirt-cheap feature phone is packed full of nostalgic charms that old-school Nokia fans will love.

With no Wi-Fi, no apps and no touchscreen, there's no way the 3310 can keep up to our hyperconnected modern lives, but it has two important saving graces: its rock-bottom price and its month-long battery life.

This isn't the phone you always carry to capture your every moment and splash it over social media. But it is the phone you take away on those rough weekends where your pricey smartphone might get destroyed. Where you might not get to a plug to recharge for days at a time. It's the phone you give to your kid or your grandparent, or keep around as emergency backup. (It might also be the perfect phone to take to festivals so you can keep in touch with friends, without it popping out of your pocket when you're dancing your heart out.)

At £50 -- which converts to about $65 or AU$85 -- the 3310 isn't the classic phone we loved brought into the modern day, it's more like a reimagining of an old friend. More importantly, it's different enough from a smartphone to be a bit of fun, and I like it a lot for that reason. The phone first launched without 3G, although a new version now does have it and will be available globally in mid-October.

Don't buy this phone expecting to make it your one and only. Do buy it as a spare for your holidays or as a handset to give to your kids -- perhaps one day they'll look back on it just as fondly as I do with the original.

The 3310 is available in most countries but it isn't going to be everywhere. It won't work at all in the US, and before you buy it, you should double-check to make sure it's compatible with your local carrier network.

If it is, here are the six reasons why I think the new Nokia 3310 is a great addition to your mobile posse, and two ways it's also let me down.

1. It's got awesome battery life

It turns out battery life isn't a problem when you ditch the massive touchscreen and all but the most basic of functionality. Without modern features bogging it down, the 3310's battery life is superb. Nokia says it can last for up to a month on a single charge, and while I haven't been able to test this fully, it's managed to last a long weekend of taking photos, listening to music and playing Snake without needing charging.

Heading to a festival this summer? The 3310 will easily get you through the whole muddy weekend without conking out, meaning you'll never be out of contact with your mates as you wait in line for drinks. You could take it trekking through the mountains, give it to a friend who's visiting from overseas, or toss it into the car for a long road trip and know it'll be ready to go any time you need it.

At only £50 in the UK, the 3310 is vastly cheaper than the fancy phone you probably already have in your pocket. Losing it would be a bummer, but replacing it is a drop in the ocean compared to the cost of replacing a new Galaxy S8.

With a body made from stiff plastic and no massive glass touchscreen to protect, the Nokia 3310 can take a few knocks without waving the white flag. I repeatedly dropped my review model on grass, wood and concrete from pocket height and despite a few scuffs, it still works absolutely fine.

4. Nostalgia is a wonderful thing

The original 3310 has rightly become a classic icon of mobile phone history, and while this modern iteration is slimmer and more rounded, it's a worthy successor to the 3310 we knew and loved in the early 2000s. I adored my original 3310. Just looking at this new one brings back memories of texting my high school crush and cutting out all the vowels to keep the message under 160 characters so I didn't have to pay for two texts. I was a true romantic.

Twice, during my testing of the 3310, strangers stopped me to ask to see it. That has never happened with my iPhone.

5. It's great for young kids

It's cheap enough to give you a line of contact with your kids without you worrying that they'll lose it. It's strong enough that you won't have to pay to replace a cracked screen. And since there's barely any internet to speak of, the only screen time you'll have to worry about is…

The classic game might come in colour now (it was black and white on the original 3310), but it's still Snake. Snake is great. 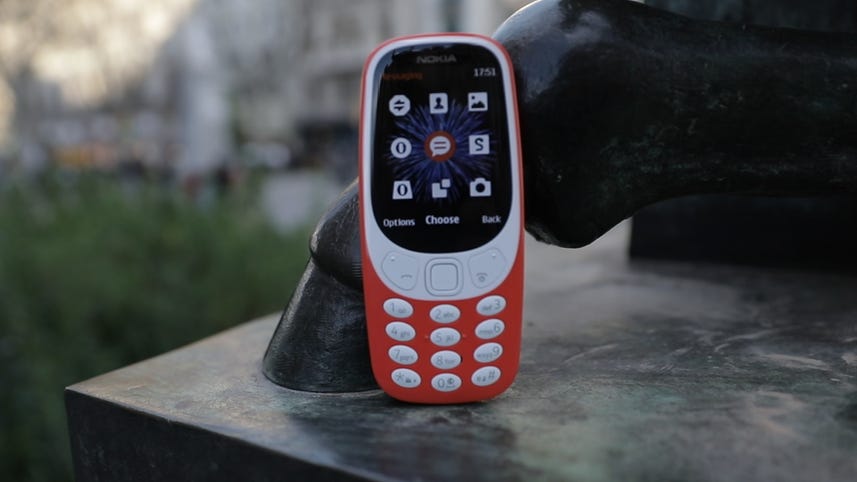 The joy of Nokia's original 3310 -- not to mention the rest of the Nokia handsets from that era -- was the ability to swap in any number of bright fascias, festooned with patterns or, in my case, pictures of animals I liked. When everyone had a 3310, being able to customise them so much made every one of our phones unique.

Instead, you can buy the phone in blue, yellow, red or grey but you can't change it's colour later on. Choose wisely.

2. Lack of apps will become a drag

Yes, it's great having a phone with a battery you don't need to worry about, but its total lack of smart features means it's unlikely ever to become your main handset. While I could live without Twitter on my phone and I don't really need 20 apps to edit one photo, I couldn't manage long term without Gmail or WhatsApp.