Moto E5 Plus review: Not your first budget choice

It's not even Moto's best cheap phone.

Perla Shaheen is heading into her junior year at UC Berkeley and spends her spare time hiking or reading. She's been captivated by tech and all its advancements since age 10, when she got her first hot pink Motorola Razr flip phone. And after 19 years as a Southern California native, she still cannot surf, but that doesn't mean she'll ever stop trying.

The Moto E5 Plus is a budget phone with some definite perks: Terrifically long battery life, a sturdy design and a large 6-inch display. Other than that, the pricing on this phone contradicts itself.

The Moto E5 Plus' battery outlasts the more expensive Moto G6, and it has a larger display.

Uncomfortably big for my hands, with a clunky design. It’s only available in the US on Sprint and Cricket, and prices vary wildly.

Buy the Moto E5 Plus if you're looking for a budget phone on Cricket. Otherwise, skip it in favor of a slightly pricier Moto G6 Play or Moto G6.

In the US, the Moto E5 Plus is simultaneously cheaper and more expensive than the Moto G6 and G6 Play. Take a look at the chart below to see what I mean.

Currently, the Moto E5 Plus is only available on two US carriers. Without discounts, it sells for $180 on Cricket or for $288 on Sprint -- it's the same phone!

Frankly, this phone is not worth $288 or even $180. The more expensive Moto G6 or G6 Play are better choices. While the Moto E5 Plus' battery life lasts longer than the G6, its screen resolution, speed and camera quality paled in comparison.

The Moto G6 Play and E5 Plus have similar designs, features and performance. The major selling point for these phones is their battery life. Though the Moto E5 Plus has a bigger battery -- 5,000 versus 4,000 mAh -- the G6 Play lasted longer in our looped video playback test in airplane mode.

On the other hand, the Moto G6 gets even less battery life than the E5 Plus or G6 Play. But it makes up for that with dual rear cameras, a higher screen resolution, faster performance, a lighter body, a USB-C port and a slick-looking glass back.

If you want the biggest screen and a long battery life, get the Moto E5 Plus. But if you're looking for a better camera and an overall better fit and finish, I'd recommend the Moto G6. Even if its battery doesn't last as long, I prefer the smaller, sleek design of the Moto G6 to the clunkier E5 Plus.

The Moto E5 Plus should be tried on for size before buying. Its 6-inch display is too big for my small-ish hands. This, along with the phone's smooth edges and backing, made it easy to slip out of my grip.

Anytime I attempt to perform a "Moto action" -- i.e. shortcuts for Motorola phones like chop twice for flashlight -- the Moto E5 Plus flies out of my hand. But, I will give credit where it is due: No matter how many times the Moto E5 Plus clunked and binked to the ground, the screen never cracked.

The Moto E5 Plus' plastic backing looks sleek, though it scratches more easily than the Gorilla Glass 3 back of the Moto G6. Like the Moto G6 and G6 Play, the E5 Plus is splash resistant, meaning you needn't worry about accidental spills, but you can't plunk your phone into a pool.

The fingerprint scanner on the back has good placement, with a slight indentation to make it extra easy to find. The 6-inch display is great for watching video and playing games, but the resolution is almost half as sharp as the Moto G6. 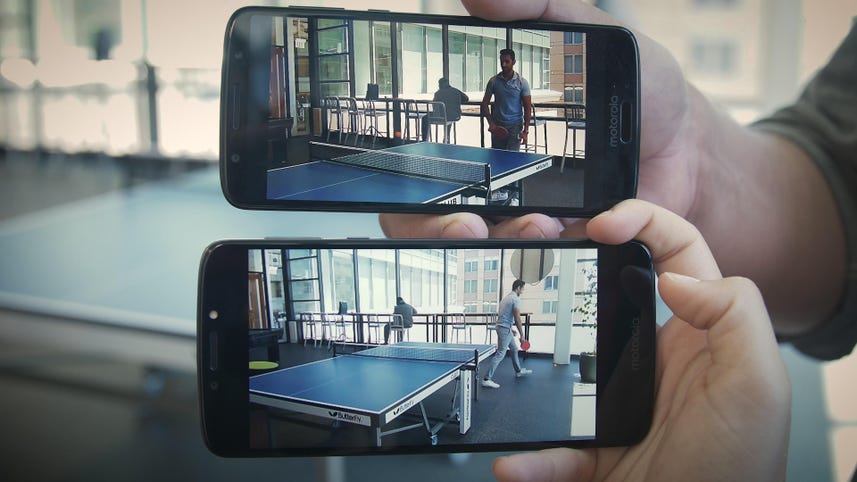 Single camera that gets the job done

The back looks like it has two rear cameras, but it doesn't. Yeah, it's got a random empty circle on the left of the rear camera -- crushing my hopes for portrait mode. But that little eye patch holds some high-tech heft. It uses a technique few phones have: lasers to speedily autofocus the camera, making it surprisingly fast and accurate.

The Moto E5 Plus' camera didn't let me down, especially on a sunny day in the park. I'd definitely use the photos I took for an Instagram post. But it's difficult to get a good picture in darker situations unless you hold the phone completely still.

For example, I took pictures of some bakery cookies, and they came out blurry -- IRL the cookies were still delicious. I liked the colors and saturation in the photo, but things in the background or anything not centered looked soft.

For a $180 phone, pictures at night turned out surprisingly clear, catching the shadows and colors sharply. The camera didn't do well with backlighting, something the Moto G6 captures more accurately with good saturation and exposure. Take a look below for a few more shots I took with the E5 Plus.

The Moto E5 Plus' 5,000-mAh battery is its best feature. The phone lasted an average of 14 hours in three of our battery tests. In the real world, the battery lasted over two days under normal use off one charge. If you're not used to such a big battery, charging takes a while. Even with a 15-watt speedy charger, it took around 3 hours for the phone to fully charge from a dead battery.

Android Oreo 8.0 is not so fast

Android Oreo 8.0 runs pretty slow on the Moto E5 Plus, scrolling through apps has some delay, and videos taken via the camera need time to load. Generally, I felt like the Moto E5 Plus was slow enough to be frustrating.

When it came to things like texting or posting pictures on social media, it was slower than my iPhone 6S. But this should be expected for a budget phone at $180. Interestingly enough, I was able to play PUBG Mobile at a low frame rate with minimal stutters.

For more specs, check out the chart below comparing the specs of the Moto E5 Plus, G6, G6 Play.