Surface Pro 5: All the rumors on specs, pricing and release date

It's been more than a year and a half since Microsoft released the last version of its hugely popular Surface Pro tablet. Could the next version come later this month?

Update, May 23: The sequel to the Surface Pro 4 has been unveiled, and it's simply called the Surface Pro. Check out our complete preview of the latest Microsoft tablet.

As anticipation builds around Microsoft's forthcoming Surface Pro 5, the hybrid laptop-tablet space grows ever more crowded. For more than a year, the topnotch Surface Pro 4, first introduced back in October 2015, was the unchallenged standard-bearer in the PC tablet category.

Though we thought we might catch a glimpse of the Surface Pro 5 (or non-Pro Surface 4) at Microsoft's May 2 event, that didn't happen. (Instead, we got the new Surface laptop.) However, a tweet from a higher-up at Microsoft indicates that the Surface Pro 5 may see the light of day later this month. More on this below. 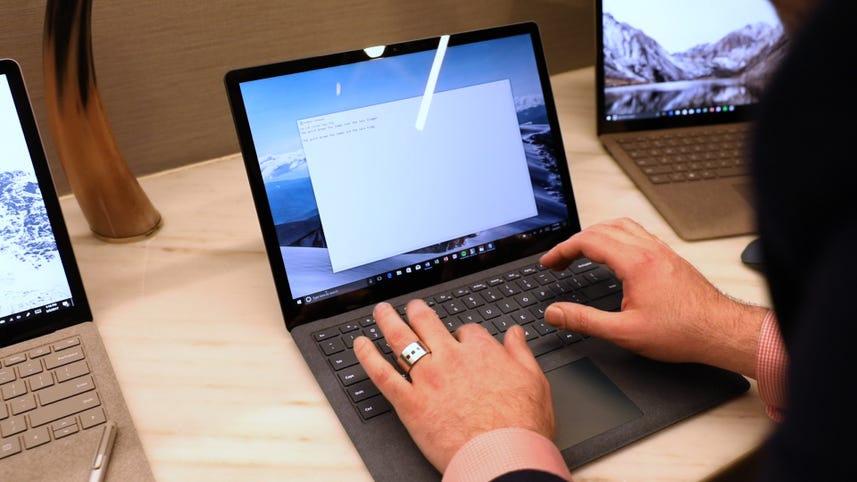 So here we are -- a full year-and-a-half after Microsoft unveiled its last tablet. With the Surface Pro 5 a no-show at the May event and nowhere to be seen at the last big Surface event in October 2016, the pressure on Microsoft is huge -- and fueling expectations that the company is holding back on some serious innovations for the next generation.

We believe a new Surface Pro is coming -- perhaps as soon as a few weeks from now. The rumors are swirling, and we're collecting the best of them below.

Possible specs for the Surface Pro 5:

When will we get it?

Though the company has made no official announcement, Panos Panay, Microsoft's Corporate VP of Devices and Surface head honcho, has tweeted about an event scheduled for May 23 in Shanghai, hashtagged #Surface.

A number of credible sources have recently predicted that the Surface Pro 5 may not deliver many breakthroughs. ZDNet is reporting that it may be just an incremental step up -- a "minor spec bump" -- and Paul Thurrott, a reliable source of Microsoft news, tweeted that it would be "nothing dramatic." He followed this up with "sounds like Surface Pro 4.5." Well, then.

The current Pro 4 comes equipped with Intel's sixth-generation "Skylake" Intel processor. In 2016, Intel introduced its successor -- codenamed "Kaby Lake" -- which is expected to power the Surface Pro 5, according to Thurrott and an earlier Forbes report.

Note that Intel has already moved on to developing the next chip architecture, "Cannonlake," due out in the second half of 2017, which, if integrated into the Pro 5, would ostensibly give it a serious performance advantage over the competition.

Surface Pro 5 will not change the Surface Connect power connector, I was just told. Kaby Lake, nothing dramatic.

Despite the Surface Pro's popularity, Microsoft has endured steady blowback for its refusal to bundle in essential accessories. Given the number of alternative tablets that do include a keyboard and stylus, and still cost less than the Surface Pro 4, it's possible that Microsoft will change its position on this issue.

We've also come across predictions suggesting that Microsoft might bundle its $99 Surface Dial with the Surface Pro 5 (don't hold your breath for that one).

In January, Patently Mobile reported that Microsoft had filed a patent application for a rechargeable Surface Pen and dock. According to the filing, the Surface Pen's triple A or button cell battery would be replaced by a rechargeable battery, following in the footsteps of the iPad Pro's Apple Pen, which can be recharged via its Lightning connection.

What about the non-Pro Surface tablet?

Keep in mind that there is a little sibling in the lineup -- the non-Pro Surface 3, which debuted back in March 2015, seven months before the Surface Pro 4. Though ZDNet reported that we might see the next version of this tablet, presumably the Surface 4, at the May 2 event, it did not make an appearance. Might we see this one at the May event in Shanghai, too?

A handful of widespread, persistent rumors appear to reflect the wishful thinking of what folks would like to see in a Surface Pro 5. These include a 4K display, better battery life (an Achilles heel of the Surface Pro 4), and a USB C port. Time will tell.

How much will it cost?

Microsoft dropped the Surface Pro 4's price in January -- another reasonably good indicator that the followup is coming soon. For now, the least expensive config starts at $799 and comes with 128GB of storage, a sixth-generation Intel Core M3, 4GB of RAM and without a stylus or keyboard.

But even with the discount, the Surface Pro 4 is still expensive. With a market growing ever more crowded with less expensive competitors, there will be pressure on Microsoft to come down on price. But back in March 2016, News Everyday published a report that the Surface Pro 5 would start at $899 -- consistent with the entry-level price of previous models.

Scroll down for a reverse-chronological look at the latest rumors.

Microsoft has announced an event in Shanghai for May 23

Microsoft is ready to jump back into the classroom. Here's all the tech it's bringing along.

Microsoft has a new Surface computer, but rather than a touchscreen tablet that adds a keyboard cover, the new Surface Laptop is exactly what it sounds like -- a shockingly traditional clamshell laptop.

The company will hold an event in New York featuring CEO Satya Nadella, but don't expect to get a glimpse of a new Surface Pro tablet.

Microsoft's anticipated Spring hardware launch is unlikely to feature the Surface Book 2. So what else might be on the docket?

There is a very strong possibility that Microsoft will launch the Surface Pro 5 along with a Windows 10 Creators update sometime in March or April.

In the wake of a specification boost for the Surface Book, the next Surface Pro is rumored to feature a serious hardware upgrade.

It turns out, you can teach an old laptop new tricks.

The super high-end device -- it tops out at $4,200 -- is intended for professional creative types.

Microsoft's late October hardware launch this year may be as much about its partners' Windows 10 devices as much as its own Surface-branded ones, sources say.

It's been some time coming, but Intel has confirmed that its next generation of 'optimised' processors is on schedule and going into production this quarter.

CNET: Microsoft needs you to fall in love with Windows. Soon

The software giant has work to do if it's going to rally people to its software for PCs, tablets and phones.

ZDNet: Microsoft pushes back Windows 10 'Redstone 2' to Spring 2017 to line up with new Microsoft device wave

Microsoft's second major set of new features for Windows 10, known as "Redstone 2," are now a spring 2017 deliverable, meant to coincide with a new wave of Windows 10 hardware, sources say.

CNET: Microsoft fixes the Surface and Apple takes on the US government

The latest Surface tablet is on sale for $100 off the regular price, while Microsoft's second-generation Band fitness tracker is now $50 less.

Earlier this month the U.S. Patent & Trademark Office published a patent application from Microsoft that reveals their work on a rechargeable Surface Pen and dock.