The LG G8 is a solid phone, but without any standout features, it doesn't beat Samsung.

You have to hand it to LG for trying. While LG was launching its LG G8 ThinQ flagship phone, its biggest rival Samsung announced five (!) Galaxy phones, including a 5G-enabled model and the headline-stealing Galaxy Fold. But the biggest threat to the G8 isn't next-gen data speeds or fancy folding displays. It's the price. Of all the new Galaxy phones, the more affordable Galaxy S10E is the phone LG needs to lure potential buyers away from.

The LG G8 ThinQ has a bright, sharp screen, a second wide-angle rear camera and a fast processor. It's also water-resistant and has a headphone jack -- a rarity among premium phones.

The phone's touchless hand controls are annoying to use. Portrait mode for video isn't very smooth or natural-looking.

The LG G8 ThinQ is an objectively great phone, but with a high price tag and no standout features, it's not great enough to beat the Galaxy S10E.

And lure it must. Though the company overall is profiting, its mobile division posted a $172 million loss in the second quarter of 2018. And while smartphone sales are down globally, things are especially difficult for LG. Its last couple of flagship phones didn't take off, and it still must compete against bigger companies like Samsung, Huawei and Apple too. (See our lineup of 2019's best phones here.)

The G8 in and of itself is a great phone. Priced higher than any previous G-series flagship before it, between $820 and $850 depending on the carrier, it's available on April 11. (UK and Australian availability and prices have yet to be announced, but $850 is about £650 or AU$1,200.) It has a slim, sleek design, it's water-resistant and it still has a headphone jack, which is perfect for die-hards unwilling to let go of their wired headphones.

The G8 takes solid, sharp photos with vibrant colors. Although its photos are comparable to the Galaxy S10E's, there are some differences. The Galaxy S10E's wide-angle camera has a wider field of view, and takes sharper images. Colors on the G8 are a bit deeper and warmer though, which I prefer. Finally, the Galaxy S10E renders portraits a bit more expertly. The falloff between the foreground and background is smoother on Samsung's phone, especially when it comes to resolving small patches around strands of hair, for example.

The LG G8 also has a low-light setting called Night View. Though Night View does brighten up the exposure, some photos turned out similar to the Galaxy S10E, which has automatic low-light settings built into the camera, but not a standalone low-light mode. The Pixel 3's dedicated Night Sight mode, however, is superior to both these other features.

LG also added a bokeh video recording that mimics the depth-of-field effect of a full-frame camera. The feature still needs to be ironed out; it's nowhere as smooth as what you'd get from an SLR camera. The blur looks artificial and the effect between the foreground and background can be patchy and inconsistent, especially if your subject moves around. (And since people usually don't stand stock still during video, you'll see the patchiness appear more often than not.) But for those who already love the blurry background effect for still portrait pictures, this lends some of that same artsy and dramatic look to videos.

LG G8's Hand ID is kind of neat, but I rarely used it

The phone's front-facing camera includes a new IR sensor and transmitter for 3D mapping and motion captioning purposes. This enables the G8 to use 3D mapping for face unlock, similar to the iPhone's Face ID feature. And because last year's G7 only used 2D facial recognition, face unlock on the G8 is supposed to be more secure (though not secure enough to use for mobile payments). I was able to use it in a dimly lit room without a problem.

The G8 also allows you to unlock the phone by having it scan the veins in your hand. To use the Hand ID feature, you hover your hand over the camera to unlock it. Hand ID builds into another feature called Air Motion that also lets you navigate the phone without physically touching it. For example, by pinching my fingers and thumbs together (as if making a bird's beak) and pointing it downward over the phone's camera, I could swipe left and right to launch certain apps, pause or play media and even adjust the volume by miming a twist of a jog dial.

Hand ID doesn't work as fast as the face unlock or the fingerprint scanner (which you can also use on the back of the phone) and you need to hover your hand at just the right spot for it to register. Air Motion doesn't work instantaneously either. It took a beat or two to recognize my hands and a couple of tries before the controls would pop up. And even then, my motions had to be very deliberate in order to register. After a while, my arm got tired trying to get these controls to activate.

In the end, I hardly used the feature and it was much easier just to pick up the phone and do whatever I had to do the old-fashioned way. The execution on the G8 is rough around the edges (as it was when we saw something similar in the Galaxy S4's Air Gesture) and it still has limited software features.

But I do find the idea pretty compelling. If LG and other phone-makers run with this concept, a future where we can freely navigate our phones without tapping the screen appears not too distant. For now though, you can only use it in very specific ways. You'll also attract a lot of looks while making a Frankenstein claw to control your phone.

With Qualcomm's Snapdragon 855 chipset, the LG G8 has a top-of-the-line processor. Its performance is fast and reliable and I didn't notice any hiccups. It performed just as well as the Galaxy S10E in our benchmark tests (which makes sense since they have the same processor), and it predictably edged out the OnePlus 6T given that the 6T has last year's Snapdragon 845 chipset.

As for the battery, the LG G8 averaged about 16 hours, 37 minutes of continuous video playback in airplane mode. Although that's an excellent time, competitors like the S10E and the OnePlus 6T lasted a bit longer at 17 hours. In the real world with medium to high usage, the phone lasted throughout the night without a charge, no problem.

LG G8 ThinQ versus the competition

Galaxy S10E and Galaxy S10: The Galaxy S10E has an excellent camera (though it doesn't have portrait mode for video), the same fast processor, slightly longer battery life and a headphone jack. At $750, it's $70 to $100 cheaper than the G8 too. And even if you did have extra money to spare, the marquee Galaxy S10 costs about $50 to $80 more than the G8. It also has a third rear camera and clocked an even longer battery run (18 hours).

OnePlus 6T: The OnePlus 6T has dual-rear cameras too, but instead of a wide-angle camera, it has a telephoto lens for a clearer zoom and portrait mode. It also runs last year's processor, the Snapdragon 845. But while it may be "older" (with the OnePlus 7 expected some time this spring), specs across the board are pretty comparable. You wouldn't be making many sacrifices -- especially since the phone starts at $549. 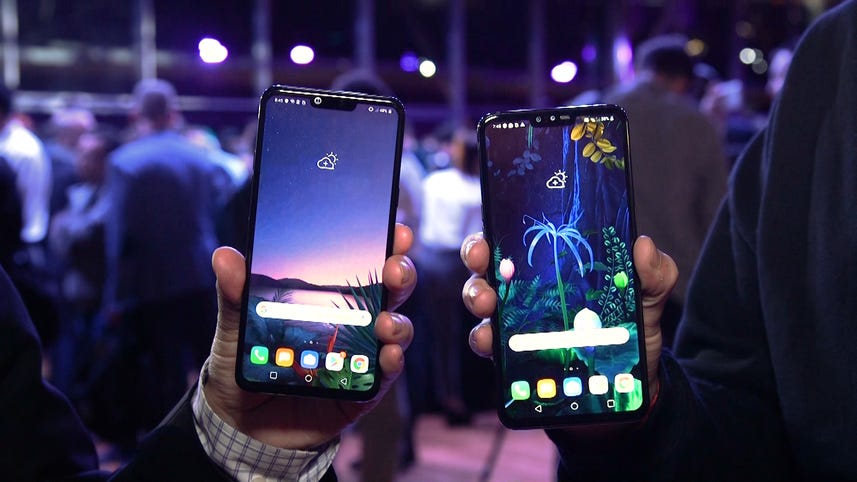 LG G7 ThinQ: If you already have the G7, don't feel the need to update. But if you're thinking of getting the G7 instead, expect deep discounts with the release of the G8. The G7 has 2018's processor and you won't get any of the fancy 3D mapping or motion tracking with the front camera, but you'll get very similar design and user experience for a couple of hundred dollars less.

LG V50 ThinQ: Expected later this spring, the V50 ThinQ may be the LG phone to wait for. It has mostly the same innards as the G8, but it's slightly bigger, and will have triple rear-cameras and dual front-facing cameras. Most importantly: it'll have 5G connectivity. In the US, the V50 will arrive on Sprint first, then roll out to the other carriers afterwards. LG didn't officially announce any pricing, but with all the extra cameras and 5G capabilities, expect it to cost a pretty penny. My best estimate would be at least $100 more than the G8, possibly reaching close to $1,000.