LG G6 review: A good phone if you can find it cheap, but there are better LGs to choose from

The LG G7 ThinQ is a better phone, but the G6 is still worth a look if you can find it for a low enough price.

LG G6 launched in April 2017 as a slightly more affordable alternative to Samsung's stable of high-end smartphones. Since then, LG released several new phones that all but make the G6 obsolete. To make matters more confusing, LG recently rebranded the phone as the G6 ThinQ.

The beautifully design LG G6 is water resistant with a tall, expansive display and an extra wide-angle camera.

The phone is LG's first flagship in years without a removable battery. It has last year's Snapdragon 821 chipset.

The LG G6 is still a decent phone if you can find it cheap.

The G6 was a formidable phone, but it's currently not worth buying unless you can find one on sale. You'd be better off investing in a LG V30, V30S ThinQ, or G7 ThinQ, all of which have upgraded cameras, larger screens with slimmer bezels, and faster processors.

The review of the LG G6 -- originally published on April 19, 2017, and otherwise is mostly unchanged -- follows.

In high school, being different only works if you're also cool. Otherwise, you get mocked or, possibly worse, completely ignored. LG can no doubt relate.

After the lackluster reception of its unique, modular-like G5, LG decided not to double-down with another quirky approach to mods. Instead, it reversed course, toed the party line and released the more traditional G6. Gone is that funky hot-swappable chin. In its place is a slim, water-resistant build whose screen takes up an enviable 80 percent of the phone face. For LG, this is the safer but smarter play since the G6 has to do battle with the https://www.cnet.com/products/google-pixel-phone/OnePlus 3T, the Google Pixel phones and the Samsung Galaxy S8.
So does it usurp its biggest South Korean rival, the S8? Not exactly. On paper, the G6 doesn't have as powerful a processor and as long-lasting a battery. LG fans will also be disappointed that said battery is no longer removable (then again, neither is the S8's). And while earlier LG was set to announce its big-screen, small-bezel phone, Samsung's S8 takes the same basic idea and adds more elegance with a unique curved-edge twist.

But Samsung's still dealing with some Galaxy Note 7 fiasco fallout, and the G6 is a great alternative if you're squeamish about Samsung. Plus, with a $600-$720 (depending on the carrier) price tag, the G6 is about $30-$100 cheaper than the S8. For the first time in a long time, an LG handset stands a fighting chance to be your next high-end Android phone. It may not be popular enough to be Prom King, but it's a no-compromise premium phone with enough mainstream appeal to be on the ballot.

Editors' note: This review was originally published on April 12, 2017 and has been updated and expanded with direct comparisons to the Samsung Galaxy S8.

The G6 is LG's nicest-looking flagship yet, which I don't say often, especially given last year's out-there G5. But the polished G6 has a streamlined aesthetic and a smooth unibody design (think the LG V20 with fewer seams or the G5 with fewer bumps). It's a bit heavy in the hand, but that doesn't bother me much. Like with previous LG handsets, the fingerprint sensor is built into the home button on the back, which sits below the camera (and not next to it, like with the S8). Oh, and don't worry, there's still a headphone jack.
The sharp, 5.7-inch screen takes up roughly 80 percent of the front of the phone, leaving it with an impressively thin bezel all around. It's unique in that it has an 18:9 aspect ratio (with the exception of the S8, most phones are 16:9).

The phone feels expansive and "tall," especially when you're scrolling down your web browser or social media feed. Not all apps and games take full advantage of this ratio though, and when they can't, you'll see black bars on the sides of the display even at full screen, aka "pillarboxing." You can enable "app scaling" on some apps by going into Settings. The longer display works, and seeing that you get more screen for about the same build size, I'm all for it.

In addition to its beautifully glossy design and screen, the G6 is dust- and water-resistant like the S8s, the Apple iPhone 7s and several Sony Xperia phones. It's rated IP68, so you can dunk it in up to 4.9 feet of water (about 1.5 meters) for up to 30 minutes. For the everyday user though, it just means the G6 won't crap out after you accidentally drop it in the pool or spill coffee on it. (Get a deeper dive on IP ratings and what they mean for waterproof gadgets.) I dunked it in a fishbowl and a bucket of water and let it sit each time underwater for 30 minutes. I also placed it inside a shower with the water splashing on it for 30 minutes. In all three instances, the handset kept ticking fine afterward, and it even registered an incoming call during the full dunking.

Non-removable battery is a bummer

With that said, waterproofing and removable batteries don't tend to go together these days, so the fact that the G6 does not have a removable battery was kind of a given. Still, to longtime LG fans, this might come as a disappointment. After the LG G2 in 2013, the company has been one of the few holdouts to feature swappable batteries in its flagship phones, so people can switch a drained one for a charged one or replace an old battery with a fresh one.

Not having that advantage is a drag, but it's not a deal-breaker for everyone either. LG also hopes that the G6's increased battery capacity (from 2,800mAh in the G5 to 3,300mAh) and new wireless charging feature -- just for the US -- can offset the benefits of a swappable battery. During our lab tests for continuous video playback on Airplane mode, the handset lasted an average of 13 hours and 21 minutes, which is better than last year's 12.5 hours.

The Galaxy S8 doesn't have a removable battery either. Samsung's flagships ditched that years ago. Its 3,000mAh battery clocked an average of 16 hours of drainage time. Samsung also said the overall life expectancy of the S8's battery life will last longer as well, years down the road.

Go wide or square with the cameras

Like the V20 and the G5 before it, the G6 has two cameras on the back. But they aren't to take artsy "bokeh" portraits like you do with the iPhone 7 Plus. On the G6, you can switch between the standard 13-megapixel lens and the 120-degree wide-angle lens to capture more content in each frame. If you're really all about that wide-angle life, the 5-megapixel front-facing shooter has a wide-angle option as well.

One of my favorite things about the camera is a new interface that shows you five of your most recent photos, like a gallery stream. LG added a separate camera app called Square Camera too. Aimed at hardcore Instagram users, it offers a number of different tools to take neat square photos. (For more on how Square Camera works, watch the video below and check out our explainer.)

Watch this: Obsessed with Instagram? LG G6 has an app for you
01:41 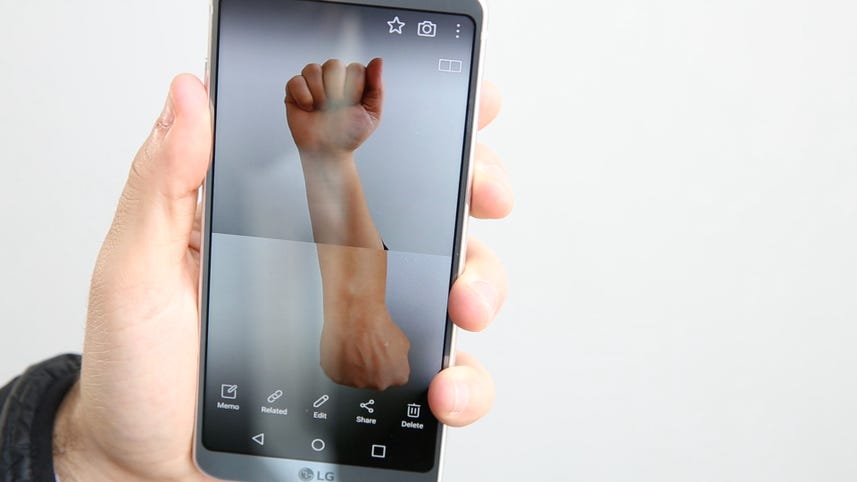 Obsessed with Instagram? LG G6 has an app for you
1:41
Watch Now

The app can be confusing at first, and features like Match Shot were hard to figure out initially. But once you get the hang of it, the results look pretty cool. My favorite is Guide, which overlays a framing template so you can capture similarly-composed photos repeatedly.

Keep in mind that if you take wide-angle shots, angles will be distorted and elongated from the side, especially when it comes to selfies with the front-facing camera. I also found that the front-facing camera takes relatively muddy shots in low light. Compared to the Pixel XL, OnePlus 3T and Galaxy S8, the G6 is on par with its rivals. The Pixel XL takes superior low-light images though, and I like the rich contrast of the S8 by just a tad. But the G6 captures sharp and vibrant images regardless, and other than blurry selfies in the dark, you'll be satisfied with the camera setup.

For more information, check out our video on the G6's camera, the slideshow below and our gallery for outdoor photography with the G6.

The G6 features a Qualcomm Snapdragon 821 processing platform, which specs nerds will notice is the same chipset in last year's OnePlus 3T and Google Pixels. Compared to the 821 chipset, Qualcomm's latest 835 is measurably smaller, faster and quicker at recharging mobile batteries.

When I benchmarked the 835 in a reference device, it indeed outpaced phones with the 821 (including the G6) by a comfortable margin. And while the S8, which also has the 835 for certain markets, garnered slightly lower scores than the reference device (this makes sense, since reference devices are designed for peak performance), the S8 still consistently edged out the G6.

But take these results with a pinch of salt. Unless you want to be on the absolute edge of technology, the idea of being saddled with "last year's" processor shouldn't be a huge deal, and the advantages of the 835 aren't that dramatic on paper. In the real world, the usual differences between one superfast processor and another are hardly discernible. During my time with the G6, it was smooth and fast. Apps launched and quit promptly, the camera operated quickly and the display was responsive.

Square peg in a square hole

Tech fans and phone buffs often complain about the lack of smartphone innovation. But when companies experiment with something novel, their efforts often flop or fold. Meanwhile, incremental iterations of familiar handsets like the iPhone 7 and Galaxy S7 remain big hits.

LG took a chance with the G5 and when that became a dud, it switched gears and made the G6 like every other flagship you see now (and will probably keep seeing throughout 2017). That's not exactly a bad thing though. By going with a simple, sleek design, a water-resistant body and a feature-packed camera, LG is giving phone users what they want. Covering the basics may be boring, but it works when you do it right (and even better when you can do it for a cheaper price). In the case of the G6, while it doesn't have anything novel or buzzworthy, it's LG's most marketable and widely-appealing phone yet.