LG G7 ThinQ review: Does everything right except excite you

The G7's speedy processor, great camera and water resistance are as dependable as any premium phone. But there's nothing special to put it over the top.

LG is exasperated. Currently splashed across its page for the G7 ThinQ in bold purple letter reads, "WHAT'S IT GONNA TAKE?" Though the sentence ends there, you could guess that the second part of the question continues as, "FOR YOU TO BUY OUR PHONE OVER SAMSUNG?!"

The waterproof LG G7 ThinQ has an AI camera that gives your photos a boost before you snap them. The phone has a secondary wide-angle rear camera and a headphone jack.

The phone has a familiar design, its Google Assistant button isn't reprogrammable and battery life is unimpressive.

The LG G7 ThinQ is a really good phone, but one that fails to distinguish itself from more compelling offerings from Samsung, OnePlus and Google.

It's a fair question. Time and time again, LG has made generally excellent premium phones that are slightly cheaper than the concurrent Samsung flagship. And yet, LG still experiences stagnant sales that are far behind that of Apple and Samsung. Even worse is that people are buying fewer phones in general.

And so it goes again. The G7 ThinQ (pronounced "thin-kew") carries over a lot of things I liked from last year's flagship: water resistance, a headphone jack, a sharp screen and a capable dual-camera.

But last year, LG was digging itself out of the flub that was the modular G5, so the bar wasn't set that high. This time around, perhaps due to the relative excellent-ness of the G6, the G7 feels like more of the same. And its new features (like an iPhone X-style notch that you can camouflage, a rough-around-the-edges AI camera and a Google Assistant button) aren't enough to wow in 2018.

In addition, at $750 to $790 (prices vary by carrier), the G7 is pricier than past LG flagships -- about $80 to $150 more depending on the carrier. (UK and Australia pricing hasn't officially been announced, but that converts to about  £559 to £589 and AU$978 to AU$1,030, respectively.) That may be because the G7 starts out with more internal memory than previous LGs. But that price range now puts the phone closer to Galaxy S9 territory, slashing one of LG's most notable advantages: cost-savings.

For $50 more, the Galaxy S9 serves up a longer battery life, a fantastic camera and a sleeker design. If both are out of your budget, the OnePlus 6 delivers much of the same specs (except water resistance and wireless charging) for $200 less. I also heartily recommend the $650 Pixel 2. Though it came out last year and the Pixel 3 is expected this fall, Google's phone still has one of the best cameras on the market.

Though first introduced on Android phones, the controversial screen notch -- which looks like a black cutout tab on top of the screen -- was popularized by the iPhone X. And while its overall existence remains a point of contention (i.e. it gives you more screen real estate versus it's a distracting and unnecessary aesthetic choice), more Android phones are adopting it, including the G7. It's also built into Google's latest OS update, Android P.

I've gotten used to using a phone with a notch, so I won't debate its merits here. I will say, though, that the G7's notch is optional -- kind of. Like the Huawei P20, if you don't like it, you can go into the settings to blacken the sides that flank the tab to have a traditional-looking alert bar. There are other colors too, like gray or swirly rainbow, but honestly, anything that's not black looks quite ugly.

The reason I say "kind of" however, is that these overlays don't stay "on" completely. While the alert bar remains black on certain things like the home screen, the settings menu or when you launch the Gallery app, it switches off when you launch other things. That means when you're looking at text messages, Calendar, Maps or other apps, the notch is back on and visible. Why LG just won't allow the black bars to remain consistently on or off is a mystery.

No escaping the notch: 15 phones with screen notches

A bright screen and ho-hum looks

As for the rest of the screen, LG boasts that the G7's LCD display is super bright (1,000 nits) and easy to view in outdoor sunlight. When I compared it to the iPhone X and the Galaxy S9, the white on the G7 was indeed the purest and brightest. Its high resolution (3,120x1,440 pixels) also makes it sharp and clear.

But blues, reds and greens looked more vibrant and saturated on the Galaxy S9 than on the G7. In addition, the G7's blacks could not compete with the OLED screens of the other two, and its screen looked more darkish gray than the Galaxy and the iPhone when displaying a black swatch. Lastly, even though color shifting isn't a huge deal on phones, color tones changed more on the G7 as you viewed it from different angles.

Overall, the G7 is tall and slim, with thin bezels (save for the bottom) and a glossy design. It doesn't have any particular wow factor (like the Galaxy S9's curved screen) or any other thing that just sets it apart (like the Pixel 2's glass shade). But then again, that's like most phones. And while the G7's back attracts fingerprints like a magnet, it also feels less fragile than the Galaxy S9 and iPhone X. I'd still be careful, since the front and back are made of glass, but at least I'm not a nervous wreck while using it with one hand.

Like squeezing the sides of the Pixel 2 and 2 XL, the G7 has a hotkey below the volume rocker that launches Google Assistant. LG claims this saves you the trouble of having to say the "OK, Google" voice command. (It's funny how these companies posit "tapping a button" versus saying a command as equal inconveniences against another.)

Long-press the button and you can run an image search with the phone's camera and Google Lens, which uses AR and Google's vast search database to identify objects and offer information, like with books and albums. You can't reprogram the button, which is a drag, and these are the only two actions you can do for now.

LG and Google worked together to make the G7 the first phone with a dedicated Assistant button. But I wonder how much of an advantage this is, since I bet the G7 won't be the last. The G6, for example, was the first non-Google phone to have Assistant built-in, until other phones quickly got it with a software update. And despite LG and Google being close partners, I imagine Google will still save its best software goodies for its upcoming Pixel 3 phones.

But if AI is what the G7 is going for, Assistant is a safe choice. It can carry out some G7-specific actions like taking a photo with the wide-angle camera or launching the camera on AI mode (though sometimes this is slow). And I prefer LG's route to roping users into some new, half-baked proprietary platform like Samsung's Bixby, which is accessible on Galaxy phones through a hotkey too. Read more on how the LG G7's Google Assistant key differs from Samsung's Bixby.

Portrait mode and a 'smart' camera

One of the G7's standout features is its emphasis on artificial intelligence. Companies use this term liberally, and it includes a lot of different things depending on who you're asking. But these features fold into LG's whole "ThinQ" branding, which is an ecosystem that's meant to work with other LG products like smart home TVs and appliances.

Watch this: LG G7: Three ways its cameras are different
01:37 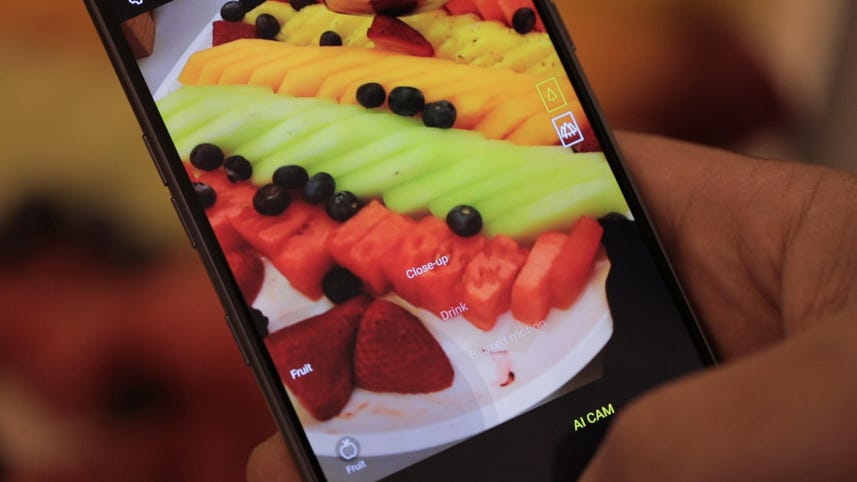 The camera itself can identify more than a thousand objects and images, then group these things into 18 different categories (person, sunrise, night sky and so on). It'll then automatically adjust the camera settings accordingly and suggest three filters that are optimized for the scene.

That's the idea anyway. There were some occasions when the phone recognized an object and promptly locked in an accurate identifier. But there were other times the camera would keep thinking and thinking, calling up irrelevant items (salt basin? cauliflower?) with no end.

This doesn't prevent the camera from taking a good photo in the end, and when the AI does make its adjustments, pictures can look more vibrant since the contrast is cranked higher. It also helped with overexposure and lighting.

In general though, I found myself skipping the feature. It can be distracting, and while I can imagine someone enjoying the novelty at first, the phone's algorithms need to be more accurate and work faster to compel me to use it.

LG also made it more straightforward for the G7 to snap portrait photos with both the rear or front-facing shooters. By tapping "portrait" on the camera's screen, you can take a bokeh-style photo with a blurred background for a dramatic shot.

Compared to the iPhone X and the Galaxy S9 Plus, the G7 does a good job at figuring out what should be in the fore- and background and configures the bokeh effect quickly. Tricky edges (like the stray hairs around a head) were rendered well, with no obvious patches or halo. And unlike the iPhone X, you can adjust the amount of blurriness in the background. But I prefer the iPhone X's warmer handling of skin tone, and even though the G7's colors were more "accurate," per se, its photos looked cooler and washed out in the end.

In general, the G7 takes clear shots with plenty of sharp details. Colors run a bit cooler, as I mentioned before, but they are true to life. Lastly, I also noticed that the camera shutter is a beat slower than I prefer. Even though I never missed any moments, it could definitely stand to fire off a bit faster.

A loud speaker and high-end audio

The LG added a few audio upgrades to the G7 as well. These include:

Equipped with Qualcomm's latest Snapdragon 845 chipset, the G7 is speedy and smooth so far. Besides the shutter, the aforementioned AI camera works effortlessly and scrolling through web pages, watching videos and launching apps all went off without a hitch.

Benchmark tests also showed lightning-quick speeds. Considering only phones with the Snapdragon 845 processor, the G7 beat out the Galaxy S9 in one of our tests, though both were edged out by the OnePlus 6.

During our battery tests for continuous video on Airplane mode, the phone lasted an average of 12 hours and 38 minutes. As a comparison, the G6 (which has a larger 3,300mAh battery) lasted 13 hours and 21 minutes, and both the Galaxy S9 and OnePlus 6 clocked an average of nearly 15.5 hours.

While 12 hours under lab conditions is certainly enough to last through the workday (and let's not get it twisted -- the Galaxy S9 and OnePlus 6 will eventually need to be charged too), the G7's battery life is less than impressive compared to its rivals. While the lower battery capacity is a factor, the phone's screen is also brighter than before, which likely contributes to the shortened test result.

But in such a cut-throat industry like this one, you need every advantage you can get. This battery time, together with the underwhelming AI experience, means the LG G7 ThinQ just can't push itself to the top of the ranks.