The Lenovo Yoga Book gets a second chapter

The dual-screen PC is back, this time with an E Ink keyboard.

The dual-screen laptop is an idea that comes around every few years, but never quite manages to catch on. Learning from its previous attempt, the new Lenovo Yoga Book C930 changes up the formula in a way that is at least highly novel.

We've seen the idea of a laptop with a second screen in place of a keyboard a few times before. There was the Acer Iconia back in 2011, the original dual-LCD Yoga Book (in both Windows and Android versions) in 2016 and earlier this year, a sneak peek at an Asus prototype called Project Precog. This overall design might even be the future of mobile phones, once foldable screens become common.

The biggest issue with previous dual-screen laptops, including the first Yoga Book, is that typing on an onscreen keyboard just doesn't work very well for most people, especially on a large, slick glass surface with little to no tactile feedback. Even iPad onscreen typing is still considered kludgey.

For the second-gen Yoga Book, now Windows-only, Lenovo is replacing the bottom display with a touch-enabled E Ink keyboard. That means you get a more specialized input device, better finger traction on the matte screen, faster response than the previous full-color touchscreen and potentially much better battery life.

Watch this: The new Yoga book makes its mark with an E Ink keyboard
01:19 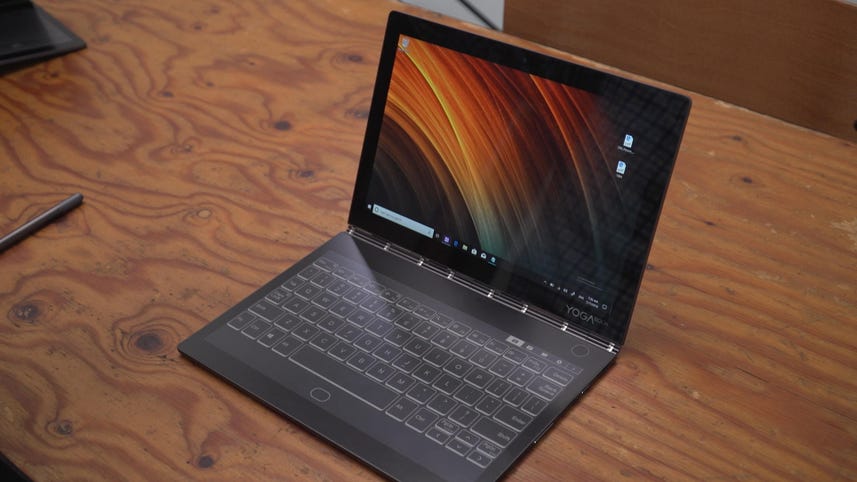 It does mean, though, that you can't use the bottom screen as a secondary or extended Windows display, and you lose out on some flexibility in tools and widgets that can replace the keyboard. The keyboard adds multiple language and layout support, as well as a touch pad that can pop up only when needed.

In my brief hands-on time with a prototype of the new Yoga Book, I thought the E Ink keyboard was more responsive and easier to use than the original Yoga Book, but superfast typists may find it has trouble keeping up (this may improve in the final version). The haptic response was decent, but it's not the same as having per-key feedback.

Of course, you can use the E Ink display as a reader, but for now it only supports PDF files, not proprietary formats like Amazon's Kindle e-books. That feels like it'll be a make-or-break feature to add if at all possible.

A few other tricks the new Yoga Book has up its sleeve:

The new Yoga Book C930 will be offered in both Intel Core m5 and Core i5 versions, starting in October for $999 and up. International price and release details were not yet available.

Computers for the creative class: The very best new laptops, tablets and desktops for creatives.