Lincoln's new compact SUV makes a solid first impression, cramming many of the same luxury features and smart technologies of the larger Aviator into a smaller, more accessible frame.

Meet the replacement for the Ford Escape-based Lincoln MKC. The 2020 Lincoln Corsair hits the road this fall with a new look, loads of new technology and a new attitude. But it's not just an update with a catchy new name. The Corsair -- alongside the three-row Aviator -- is the harbinger of a sort of renaissance within the Lincoln brand, debuting smart new technologies and performance aimed at elevating the automaker in the luxury space.

In the sheetmetal, the Corsair is surprisingly small, even for this already compact luxury class. The Lincoln's 180.6-inch length is a bit shorter than the Lexus NX (182 inches) and Mercedes-Benz GLC-Class (183.3 inches), slotting somewhere between the Audi Q3 (177 inches) and Q5 (184 inches). The Lincoln's small stature is exaggerated slightly by concave doors that curve inward, creating the SUV equivalent of a narrow waist.

Up front, the Corsair features the same design elements as the new Aviator, including the notched chrome grill with hexagonal cutouts echoing the Lincoln star badge. Jewel LED headlamps are matched with sharp daytime running lights. The entire front end is more upright than the outgoing MKC, which makes the Corsair look a bit like the cutest little Navigator you ever did see. Out back, sharp taillights stretch across the SUV's Audi-esque rear end, just beneath an integrated spoiler that adds a sporty finish to the Corsair's silhouette.

Beneath the Corsair's hood is one of two turbocharged, four-cylinder engine options. The base 2.0-liter makes 250 horsepower and 280 pound-feet of torque, which it sends to either the front wheels or through Lincoln's all-wheel drive system. My example, however, has the upgraded 2.3-liter turbo, which makes 295 horsepower and 310 pound-feet of torque with standard AWD.

So equipped, the Corsair has a meaty, broad torque curve that offers good acceleration off the line and around town. It's not what I'd call a sporty powertrain, but Lincoln isn't shy about its comfort and quietness goals being the most important targets for the Corsair. In fact, Lincoln went through great lengths to reduce the amount of engine noise in the cabin -- there's no fake electronic exhaust sound and no induction noise piped in -- with active electronic sound cancellation and loads of passive sound deadening. Pop the hood and peek into the corner, for example, and you might spot insulating fabric stuffed into certain open spaces behind body panels to soak up road noise and resonant sounds.

Whichever powertrain you choose, the Corsair packs a smooth, eight-speed automatic transmission to complement its supple suspension. The compact SUV is available with an adaptive suspension, which adds a bit more handling edge in the goofily named "Excite" sport drive mode. Like the Aviator, the Corsair features five drive modes with silly names such as Conserve, Slippery and Deep Conditions. Excite is the sportiest, with sharper throttle response and a more agile tune for the power steering and suspension. But even then, the Corsair feels like it was made for cruising.

As they cruise, Corsair drivers will be treated to a cabin that's inspired by the larger Aviator, but isn't exactly a scaled-down copy. Look closely and you might notice a slightly more plasticky look and feel to the materials, but they're still of a fairly luxurious quality with nice-feeling leather trim, chrome-look details and piano black finishes.

Aesthetically, it's not exactly my cup of tea, but I can appreciate the fit, finish and impressive features, like Lincoln's 24-way power-adjustable seats with individually articulated thigh supports, multiple massage programs, heated and ventilated surfaces. With so much adjustability, it took me some time to get the seat set just right. But once I did it, the customized comfort was well worth the effort.

The Corsair saves your seating position and other preferences to a driver profile, which can be tied to a key fob or a Bluetooth-paired phone using Lincoln's Phone As Key feature. Like the larger Aviator, this allows drivers to use their phones to control, unlock and start the Corsair without unlocking the phone or removing it from its pocket or purse. Check out my first drive of the Aviator for more details on how it works.

My example also features a panoramic moonroof that stretches all the way behind the second row which, by the way, is the only sliding second row in the compact, luxury segment. This feature, which I've only ever seen on three-row SUVs, allows some flexibility between having lots of legroom on the second row and a bit more cargo capacity for the rear, depending on the day's needs. The Corsair can swallow up to 27.6 cubic feet of cargo behind the rear row or about 57.6 cubic feet with the seats folded flat. 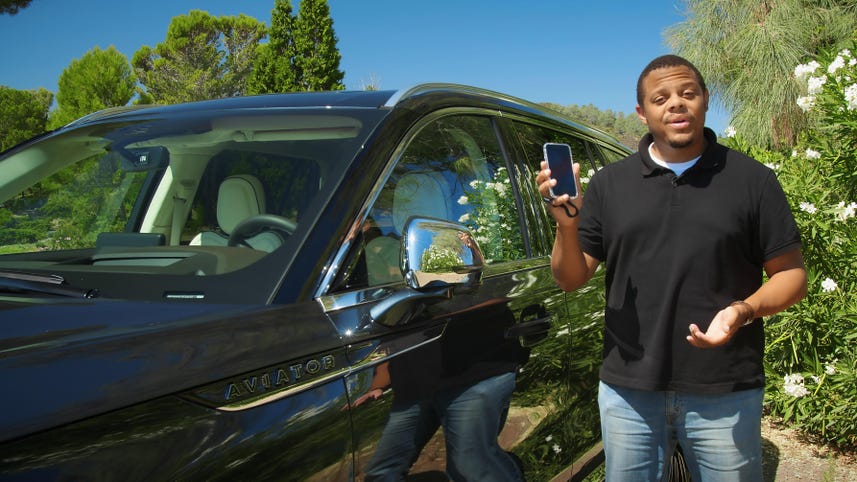 In the dashboard -- or rather, on the dashboard -- the Corsair features a smaller, 8-inch version of the touchscreen display from the Aviator. It still sticks out like a sore thumb with its tablet-like design, and is still powered by the latest-generation Sync 3 infotainment software. The OEM navigation, apps and interface are quite good and easy to use, and the Corsair comes standard with Apple CarPlay and Android Auto connectivity, should you decide to bring your own maps and apps along.

My one nitpick with the onboard software is that when starting turn-by-turn navigation, the voice guidance tells me to "remember to obey all traffic laws." I don't need to hear that at the beginning of every single trip, especially when I have to click "Agree" on a Sync disclaimer every time I start the car. Let's just assume that the owner has a driver's license, OK?

Another carryover from the Aviator's cabin is the slick Vision Steering Wheel with its illuminated controls and weirdo placement of the voice button at 10 o'clock on the wheel. Ergonomically, it falls naturally to the thumb for three-and-nine drivers, but those who keep their hands at ten-and-two might get some false triggers when steering. (Personally, I use the superior three-and-nine grip, so it wasn't an issue for me.) However, I like that this wheel only illuminates the buttons corresponding to feature currently being used to reduce distraction. So, for example, the cruise control and lane-keeping buttons don't light up until the Co-Pilot 360 system is armed. It's a small but nice detail.

Speaking of Co-Pilot 360, the Corsair features -- you guessed it -- similar standard and optional Co-Pilot 360 and Co-Pilot 360 Plus driver aid suites as the larger Aviator. Out of the box, Co-Pilot 360 brings standard precollision braking assist with pedestrian detection, lane-keeping steering assist and lane-departure warning, blind-spot monitoring and a rear camera.

Stepping up to the optional Co-Pilot 360 Plus suite adds adaptive cruise control that works in stop-and-go traffic jams, stronger lane-centering steering assist, reversing automatic emergency braking and a 360-degree camera system. So equipped, the Corsair also gains Active Park Assist Plus, which can automatically steer the SUV into a parallel or perpendicular parking space.

Like the Aviator, the Corsair makes a solid first impression and has me excited about the rest of this Lincoln renaissance. The automaker is expected to debut a plug-in hybrid Corsair later this year (like the Escape) and -- after the Aviator Grand Touring PHEV exceeded all of my expectations -- I'm even more excited to see what Lincoln does with the smaller model.

The 2020 Lincoln Corsair starts at $36,940, including $995 for destination charges. Nearly fully loaded, my example rolls out at $59,660 thanks to upgrades like the 2.3-liter engine with AWD, adaptive suspension, technology package, Co-Pilot 360 Plus, Reserve collection luxury upgrades, styling enhancements and more.

That price range is a bit richer than the Cadillac XT4 or Buick Envision, but the Corsair stands head-and-shoulders above them. Aesthetically, I prefer the Caddy inside and out, but with so many smart features and more power for both the 2.0T and 2.3T options, I'd rather live with the Lincoln. The Corsair also faces friendly competition from Lexus' NX, the new Acura RDX and Mercedes' GLC, trading performance and value blows with the segment's heavy hitters. That I'm even able to consider a Lincoln a worthy competitor to a Mercedes is proof the Corsair has a good thing going.