The Ford Escape Hybrid is a greener SUV with only a few trade-offs.

When Ford launched the original Escape Hybrid back in 2005, it claimed the title of world's first hybrid SUV. And while the gasoline-electric Escape found many happy homes -- including New York's taxi fleet -- it didn't last for long. The third-generation Escape debuted without an electrified option. But now, that hybrid hiatus is coming to an end.

The 2020 Ford Escape offers not one, but two hybrid powertrains. Are they worth considering over the standard, gas-only Escape? I hit the roads of Kentucky to find out. 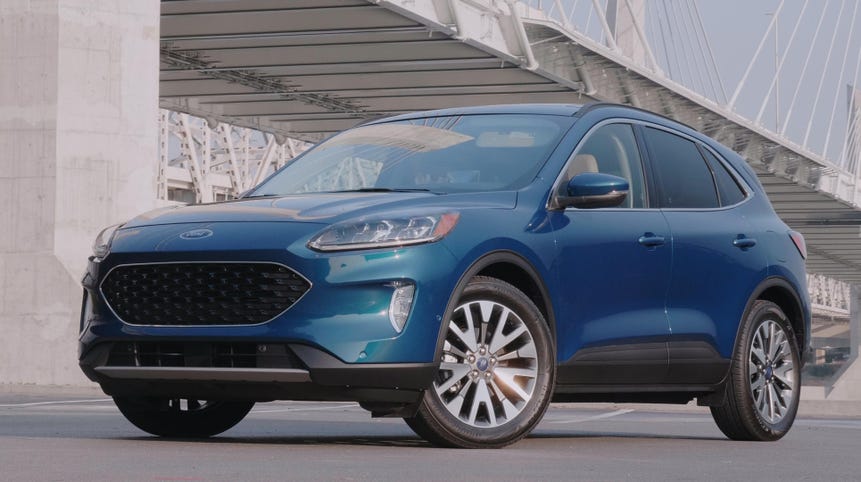 Only one Escape Hybrid will be available right at launch. It uses a mild-hybrid drivetrain built around a 2.5-liter, Atkinson-cycle, four-cylinder engine and an 88-kilowatt electric motor. Together they produce a net system output of 200 horsepower, that can be routed to either the front or all four wheels via a continuously variable transmission.

Powering the electric motor is a liquid-cooled, lithium-ion battery pack that Ford says is about a third of the size of the one found in the previous Escape Hybrid. The more compact dimensions allow engineers to mount it in the floor below the rear seats, so as not to intrude into the Escape's 37.5 cubic feet of cargo space. Folding the second row of seats expands that area to a generous 60.8 cubic feet.

Most importantly, the hybrid powertrain offers real efficiency gains. Official EPA fuel economy numbers aren't finalized yet, but some extrapolating is possible. Ford claims it's targeting an EPA-estimated driving range of more than 550 miles with front-wheel-drive. A gander at the spec sheet shows the Escape Hybrid carries a 14.2 gallon fuel tank, meaning a highway fuel economy rating of roughly 39 miles per gallon is theoretically possible. That's certainly an improvement over the base, 1.5-liter I3 engine's 33-mpg rating.

The Escape Hybrid's key competitors will be the recently announced Honda CR-V Hybrid and the already-on-sale Toyota RAV4 Hybrid. In the power department, both of the Japanese options outmuscle the Escape, with the Honda making 212 horsepower and the RAV4 making 2019. Honda hasn't released fuel economy for the CR-V as of this writing, but the RAV4 Hybrid puts up some pretty competitive numbers: 41 mpg city, 38 mpg highway. The Toyota has slightly more cargo space with the back seats folded down, too.

The second piece of Ford's two-part Escape Hybrid story will arrive next spring, when a plug-in model joins the lineup. It, too, will use a 2.5-liter Atkinson Cycle I4, but will be front-wheel drive only. Ford is aiming for this Escape Hybrid to have at least 30 miles of all-electric driving range. No doubt we'll learn more about the plug-in as we get closer to its launch.

Smooth, solid and a little fun

The Escape Hybrid's drivetrain is nicely refined, with near-seamless engine refires when switching between gasoline and electric power. If you aren't in a hurry, you can accelerate solely on electric power with light throttle inputs at low speeds. Ford says you can cruise on electric power alone at speeds up to 85 miles per hour.

Power itself is adequate when using the car's default Normal drive mode, but Sport is my preferred setting for its quicker giddy-up. The CVT's simulated gear shifts are pretty snappy, too.

The Escape Hybrid is surefooted while cornering, with an excellent ride quality even on my Titanium tester's large, 19-inch wheels and 225/35-series tires. The 3,554-pound SUV's body roll is kept in check and the regenerative brakes offer great modulation abilities. The one thing on my wish list is more responsive off-center steering feel for sharper turn-in response. Even with that quibble, the Escape Hybrid is a dynamically superior machine to the RAV4 Hybrid as far as on-road dynamics are concerned.

Like its gas counterpart, the Escape Hybrid really excels during regular commuting. Normal mode provides lighter steering and the suspension does excellent work absorbing impacts from ruts. When factoring in the quiet cabin, the Escape is a small SUV that will make a fantastic daily driver.

Visually, there's not much setting the Escape Hybrid apart from the gas-only models. Minus a small "Hybrid" badge on the liftgate, the slippery exterior shape is the same, with the tapering roofline and so-called "Mustang-inspired" grille. If you opt for the SE Sport Hybrid, you do get a slightly stealthier look with black wheels, trim molding and grille accents.

The Escape's cabin carries over, as well. Besides some hybrid-specific readouts in the instrument cluster and center screen, it's all the same. There's plenty of space in front, and the back seats slide fore and aft to better accommodate taller passengers. All of the vehicle's controls are large, clearly marked and intuitively placed. Build quality is exceptional, and materials are on par with every other small crossover out now. The only cabin knock involves the flat front seats that are in dire need of beefed-up side bolsters.

With the mild-hybrid drivetrain coming standard on SE Sport Hybrid and Titanium trims, it packs a heavy dose of tech. Sync 3 quarterbacks infotainment with an 8-inch touchscreen, featuring a Wi-Fi hotspot for up to 10 devices, Apple CarPlay, Android Auto, Amazon Alexa and Waze integration. Every hybrid Escape also gets a 12.8-inch digital instrument cluster, while the Titanium adds a standard 10-speaker B&O audio system.

The 2020 Ford Escape Hybrid begins at $28,255, not including $1,195 for destination, for the SE Sport model, while the top-of-the-line Titanium starts at $33,400. In both cases, all-wheel-drive tacks on $1,500 to the bottom line. Pricing for the upcoming plug-in hybrid model has yet to be announced.

The Escape faces tough competition from the aforementioned Honda CR-V and Toyota RAV4, but with its refined powertrain, great driving dynamics and huge loadout of tech, it's well positioned to be a top contender.