This midsize truck would rather stick to the rivers and the lakes that it's used to.

Last year, Roadshow reviewed the 2018 Toyota Tacoma TRD Sport. That review focused on the "truck stuff" -- things trucks are actually built for, like hauling items and venturing off the beaten path.

The Tacoma is capable and packs plenty of standard safety tech.

On-road ride quality and fuel economy are middling, and it's hard for a tall driver to feel comfortable.

As a proper truck, the Tacoma beams with value, but mall crawlers will be better off with something more crossover-y.

Now, it's time to review 2019 Tacoma TRD Sport, but instead of doing the same thing with a relatively unchanged truck, I'm flipping the script and seeing how it performs as a lifestyle enhancer. With truck prices rising ever closer to low Earth orbit, these vehicles need to fill multiple roles, hauling gravel and humans in equal measure.

As it turns out, a little bit of perspective goes a long way. While the 2019 Tacoma might shine in the dirt, when it comes to daily duties, it may leave you looking for something a little more civilized.

Looking the part, for better or worse

2019 marks the third model year of the Tacoma's third generation, but this truck still looks fresh. My tester's TRD Sport trim rocks blocky good looks -- the fenders are appropriately flared, the high-riding front bumper belies some off-road credentials and the grille is actually appropriately sized for the vehicle (a rarity in late-model Toyotas). I'm also smitten with the light Cavalry Blue paint job, a delightfully atypical hue for a truck.

That ruggedness also makes its way to the interior, but not necessarily in the best way. The interior feels mighty durable, which means it's basically made up of the hardest plastics possible. It might be easy to clean, but it also feels cheap and looks entirely forgettable. That said, the dials are chunky enough to work with gloved hands, and the buttons to turn on the parking sensors and Qi wireless charging pad offer satisfying clicks with each push.

The upright nature of the Tacoma's body means visibility is excellent. Blind spots are minimal, and any that exist are covered by my tester's $800 technology package, which includes blind-spot monitoring. My tester also packs leather-trimmed seats, part of a $2,890 premium package, and they both look and feel nice. Both rows of seats in my tester's crew-cab configuration offer plenty of space, and the seats in the second row can flip up for additional storage.

The driving position, on the other hand, is awkward and frustrating for taller drivers. The steering wheel tilts and telescopes, but only barely. Throw a lack of adjustable pedals into the mix, and my 6-foot frame can't find a position where my legs and arms are comfortable simultaneously. Adding extra movement to the steering column would go a long way in improving the Tacoma's daily drivability.

A mixed bag on the road

The Tacoma's driving position hints at the mediocrity to come from its on-road demeanor. Around town, I'm not left wanting for noise, vibration or harshness. Over bumps, the Tacoma acts like any other truck with an empty bed, shimmying and bouncing and transferring all that movement to the occupants. The 265/65R17 Toyo Open Country all-season truck tires are noisy, and they mix with wind speed on the highway, thanks to the truck's building-shaped silhouette. The brakes don't exactly inspire confidence, either, with the pedal feeling like it's half a step away from engaging ABS even under normal braking.

The powertrain is better. The Tacoma's optional 3.5-liter V6 sounds good as it cranks out 278 horsepower and 265 pound-feet of torque, and in my tester's trim, it will contribute to a decent 6,400-pound tow rating. The six-speed automatic transmission, on the other hand, feels like a relic discovered during an archeological expedition -- it clunks between gears, and it takes its sweet time calling up lower gears to accelerate. Again, it doesn't exactly inspire confidence in around-town driving.

Fuel economy isn't great, either. The EPA rates this spec of Tacoma at 18 miles per gallon city and 22 mpg highway, numbers I was able to meet without much conscious effort. Those figures are on the lower end in the midsize-truck segment, however, and I've been able to pull better fuel-economy numbers from the full-size 2019 GMC Sierra with a 6.2-liter V8.

A surprising amount of safety tech

Toyota has made great efforts in offering its suite of active and passive driver aids in as many vehicles as possible, and that includes the Tacoma. Every trim of Tacoma comes with Toyota Safety Sense P, which includes forward collision warning, automatic braking, pedestrian detection, lane-departure warning, automatic high beams and adaptive cruise control. The systems work well -- lane-departure warning isn't aggressive, and it operates smoothly when adaptive cruise is activated.

That equipment can be bolstered further with the optional $800 tech package. This adds rear parking sensors and blind-spot monitoring, both of which are welcome additions on the midsize Tacoma. I do wish, however, that the parking sensors extended to the front, since the hood ends abruptly, making tight parking maneuvers a little difficult. The standard backup camera offers suitable resolution and field of view.

Toyota's infotainment system, on the other hand, doesn't really move beyond "fine." My tester packs the higher-tier, 7-inch touchscreen, offering fast-enough response and buttons large enough to tap without being too distracting. It's a fine system, but it feels old when placed next to Entune 3.0-equipped Toyotas like the new Camry. Two things make me profoundly sad, though -- Apple CarPlay and Android Auto are nowhere to be found, and the only way to add embedded navigation on my tester is by adding the $2,890 premium package that also adds leather seats, automatic climate control and a moonroof.

Most of my time with the Tacoma was spent ignoring its three USB ports in favor of the optional Qi wireless phone charger. It's located in an easily accessible tray in the center console, and I especially liked that it could be switched on or off, allowing you to stuff the tray with all manner of junk if you don't always need to use it. 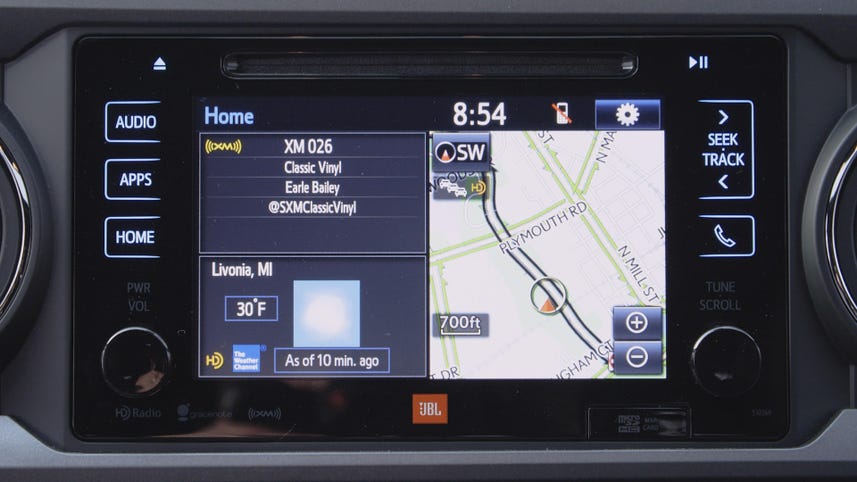 My tester costs a whopping $41,200, which I think is way too much. To save some dough, I'll start with the SR5 trim, which starts at $31,615 with a crew cab and the shorter five-foot bed. Adding four-wheel drive brings that price up to $34,960. Bringing navigation and parking sensors into the fold adds just $775 to the price -- a nice change of pace from the TRD Sport's expensive premium package. That leaves us with a predestination price of $35,465. It's still steep, but it's better than my tester.

Alternatively, for $37,720, you can buy a fully loaded 2019 RAV4 SUV with all sorts of goodies. It has a panoramic sunroof, Entune 3.0, a bird's-eye-view camera system and a ride quality that won't drive me insane.

Compared to other midsize trucks, the Tacoma rests firmly midpack. It boasts some solid towing and off-road specs (approach, departure and breakover angle), and both its size and tech complement are competitive in a field that'll soon grow one thicker thanks to the 2020 Jeep Gladiator.

But when comparing the Tacoma as a daily-life vehicle, things fall apart. The all-wheel-drive Toyota RAV4 offers a suburban level of capability -- and covered cargo space -- for a price that embarrasses many midsize trucks. Owners who don't need the full tow rating could easily move to a crossover and get 75 percent of the truck experience with a ride quality that's 200 percent better. Or, if you're truly dead set on a truck, you could opt for the Honda Ridgeline, which has a more livable unibody construction and will still do most of what the body-on-frame boys can do.

If you need a truck for truck stuff, the Tacoma won't let you down. It's as reliable as the sunrise and it's plenty capable. But if the majority of the time the truck will serve as a more traditional conveyance, your money is better spent in other segments.