The new, 455-horsepower Porsche Cayenne is properly quick and surprisingly efficient. Welcome to the wonderful world of the plug-in SUV.

There are those brands who would attempt to position a plug-in hybrid SUV as some attempt at environmentalism or eco-mindedness. But when it comes to a 5,000-pound SUV with 455 horsepower, something that can accelerate from 0-62 mph in 4.7 seconds, economy probably isn't where you want to hang your hat.

So, as it did with the various E-Hybrid flavors of the Panamera, Porsche is spending more time talking up the new, $79,900 2019 Cayenne E-Hybrid's performance chops than anything else. And it is quick, but also comfortable, composed and, yes, efficient. This Cayenne has the most complex flavor of the bunch. 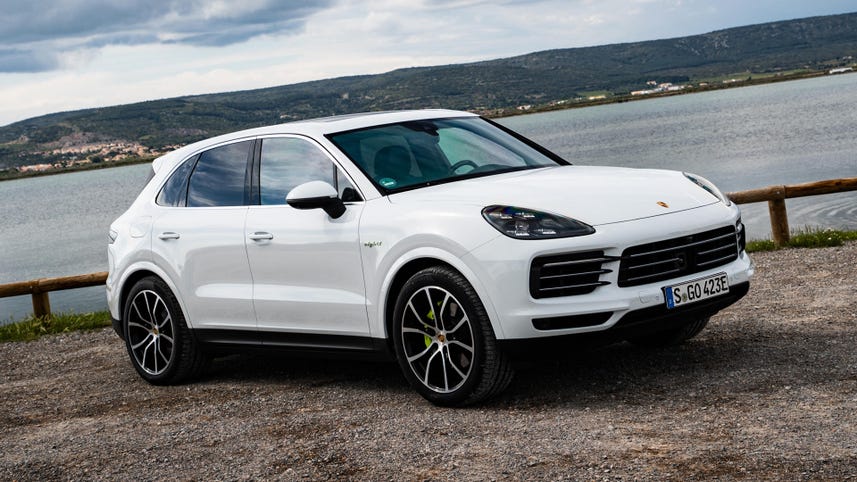 5 things you need to know about the 2019 Porsche Cayenne E-Hybrid
1:20
Watch Now

This isn't the first Cayenne hybrid, not by a long shot. Porsche started playing with the concept back in 2007 in prototype form, then launched the Cayenne S Hybrid in 2010. But the new 2019 Cayenne E-Hybrid makes those look a bit prehistoric, and it all starts with the battery.

Capacity is up some 30 percent to 14.1 kilowatt-hours, despite a pack that is no larger than before. When fully charged, that gives the car a range of 44 kilometers on the European cycle. (That equates to somewhere north of 25 miles, but given differences between European and American range estimation, expect it to be closer to 20 here in the US.)

The electric powertrain adds 134 horsepower and 295 pound-feet of torque to the equation, the other half of which comes courtesy of a 3.0-liter, 355-horsepower turbo V6. Combined power is 455 hp and 513 lb-ft of torque. That's a lot of oomph, and it's all available from just a smidge past idle.

The 2019 Cayenne E-Hybrid also includes a suite of other tweaks and enhancements, including comprehensive remote management (such as preconditioning) via the Porsche Connect app, and a more enhanced set of standard features, like Porsche's Active Suspension Management and the Sport Chrono Package.

And being part of the new Cayenne brings oodles of upgrades over the previous generation, including Porsche's latest infotainment suite displayed on a 12.3-inch widescreen display. Apple CarPlay is now included, but sadly no Android Auto.

Porsche chose to launch the Cayenne E-Hybrid in the south of France, the sort of European vacation destination that I can definitely see a Porsche SUV owner plugging into their nav system on a Friday afternoon. Indeed, I lost count of the number of Cayenne SUVs spotted driving around the locale.

However, that popularity meant I spent more time in traffic stuck behind little European trailers towed behind littler European hatchbacks. Given that, I can speak quite confidently about the Cayenne's new InnoDrive adaptive cruise and active lane-keeping system, which does a fair job of taking the worst of the monotony out of driving in traffic. It also adapts speed based on upcoming corners and even intersections. The car manages its own speed in most situations, just watch out for those traffic lights.

It's in these situations, idling along at a moderate speed, that you can really appreciate the electrified nature of the car. It's plenty quick enough to keep up with traffic, even when not burning gasoline, and of course is blissfully smooth and quiet. This makes it even easier to appreciate the epic Burmester sound system.

It's plenty quick enough to keep up with traffic, even when not burning gasoline, and of course is blissfully smooth and quiet.

However, in those joyous few moments free of traffic, it didn't take long to appreciate the Cayenne E-Hybrid's urgency. While not as ballistic as the Panamera Turbo S E-Hybrid I recently had the pleasure of reviewing, the new Cayenne is quicker than any 5,000-pound SUV has any right to be. And, while you won't be fooled into thinking it's a 911, it will keep up with most anything else in the twisties, too.

When you do twist the Cayenne's mode dial all the way over to Sport+, its quickest mode, a significant portion of otherwise wasted energy is directed back into the battery pack. So, when you inevitably catch up to the next caravan, you'll have plenty of charge to whisk along in electric mode.

The 2019 Porsche Cayenne E-Hybrid is a little like having your cake and eating it too. If you must buy an SUV and you want a quick one, here you can at least assuage any lingering, enviro-minded guilt by covering most (if not all) of your morning commute electrically. Then, when it's time to blast home in the evening, throw it into Sport+ and have a bit of fun.

The new Cayenne E-Hybrid starts at $79,900 in the US and hits dealerships soon, so best drop your accountant a call.