The QX50 packs a bunch of new tech into an elegant package.

Everyone loves a good comeback story, and the 2019 Infiniti QX50 is exactly that. The previous model was a 9-year-old frowzy mess when it was finally discontinued, but Infiniti went back to the drawing board and returned with the vastly improved 2019 QX50. Outside or in, it's a looker, but aesthetics are only one chapter in this story. It's also loaded with some of Infiniti's latest tech, whether it's the engine or its clever semi-autonomous driver assist.

The QX50's interior is among the best, and the VC-Turbo engine provides fuel economy and oomph in equal doses.

The dual-screen infotainment system feels behind the times, and all the good options are hidden behind massive paywalls.

If you want newfangled tech but a traditional luxury feel, the QX50 is worth your attention.

In a segment where nearly every vehicle has been freshened up over the past year, Infiniti needed to come out swinging, and it did.

The last QX50 was sloped in all the wrong spots, like someone left the larger QX60 out in the sun for too long.  The new one makes up for that misstep with a much better face, borrowing its best elements from also-new siblings like the Q60 coupe. It's a more expressive design that'll likely age well, and it's no longer the ugly duckling in a segment filled with handsome cars like the Mercedes GLC and Audi Q5.

And then there's the interior. My tester packs the top-of-the-line cabin trim, and it's a marvel. Blue suede and white wood are welcome additions, splitting the brown and white leather along the window line. The diamond quilting on the seats is aces, too. Not only is it pretty, it feels as well bolted-together as any of its German competitors.

Luxury comes at a price, though, and in this case, it's a staggering one. This specific interior is hidden away behind a large paywall that requires you to shell out for three packages that add nearly every option available. Considering you also need the top trim to make this all happen, all of a sudden the $36,000 base price balloons to $56,000. Yikes.

Infiniti's most clever addition in the new QX50 is its VC-Turbo engine. VC stands for variable compression -- the engine has linkages on the crankshaft that allow it to change compression ratios between 8:1 and 14:1, prioritizing efficiency or power as the situation demands.

The automaker claims it provides V6-like power with the efficiency of a four-banger, and my experience backs that up. The old QX50 pulled just 24 mpg on the highway, but the new one is rated at 30, and I am able to meet and exceed that figure at lower highway speeds. Once the speed limit raises from 55 to 70, though, fuel economy drops off quickly, hovering somewhere between that of the old and new models.

With 268 horsepower and 280 pound-feet of torque available, it's down on power but up on twist compared to the old QX50's naturally aspirated 3.7-liter V6, but it feels much more usable in a daily environment. Just make sure you're not in too much of a hurry -- it takes about 1.5 seconds to fully change the compression ratio, so any foot-to-the-floor action will be met with a long pause, even with Sport mode engaged. The continuously variable transmission keeps things nice and smooth, with simulated gear changes in around-town driving to make it feel a bit more "natural."

Spending $2,000 will give you access to ProPilot Assist, Nissan's new semi-autonomous driver aid. It's basically an enhanced adaptive cruise control, so you won't be going hands-off, but it's extra peace of mind that keeps you centered in a single lane on the highway. The package also adds a head-up display, blind-spot monitoring and a variable steer-by-wire system.

ProPilot Assist functions well enough. Lane holding is on point, but sharp turns require more input from the still-attentive driver. It's a little heavy-handed on the braking, too, especially when a driver cuts in between you and the car ahead, but it'll accelerate well enough when traffic permits.

Another atypical feature in the QX50 is its two-tier infotainment system. The top screen deals with navigation and backup-camera duties, and the graphics appear to have been nicked from a Garmin installed in a 1995 Civic. The lower screen, which covers climate controls and just about everything else, has a crisp look that contrasts starkly with the top screen, making the whole thing feel like a jumbled mess. Apple CarPlay and Android Auto are both missing, which doesn't improve matters. Infiniti's system does deserve praise for having both touch- and dial-based controls, though -- different strokes for different folks.

My favorite bit of tech in the car is a page in the gauge cluster that displays the VC-Turbo engine's compression ratio. I can watch that rise and fall all day. Infiniti also deserves commendation for making automatic braking standard on every trim. 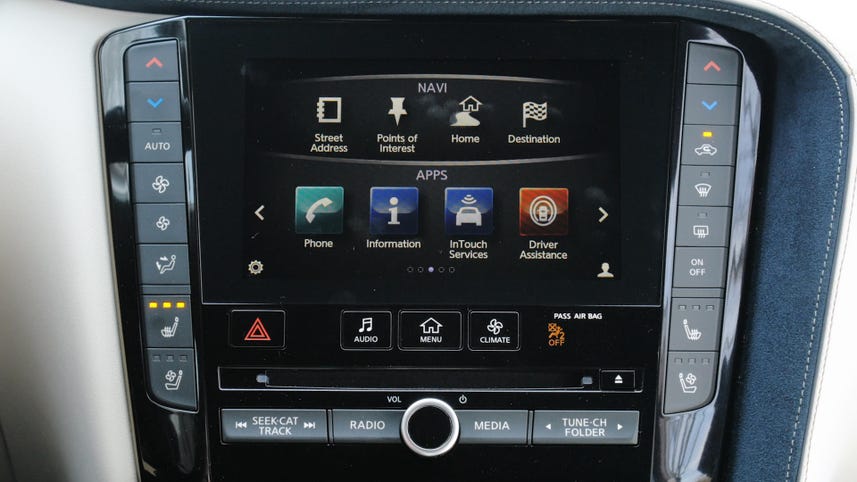 I am absolutely obsessed with the QX50's best interior, which means my ideal spec comes very close to my tester's. It demands the most expensive trim ($43,350 for front-wheel drive, $45,150 for AWD). I'll stick with FWD, putting my price tag at $54,395 after adding the required packages, which covers all manner of options like heated seats, a motion-activated liftgate, LED headlights, interior ambient lighting and a 16-speaker Bose audio system.

I'll skip ProPilot Assist since that's not really something that entices me. It saves $2,000, but I'm still staring down a vehicle that costs nearly $20,000 more than its base model. You'll have to really want that blue suede.

The QX50 is a value play at its $36,550 base price, undercutting all its competitors -- Acura RDX, Audi Q5, BMW X3, Cadillac XT5 et. al -- except for the Lexus NX. It manages to trump the field in fuel economy. It's also among the most capacious with the second row folded down. Not too shabby.

No longer the black sheep in the segment, the 2019 QX50 strikes an excellent balance between new tech and proper luxury. It's a bummer that the best stuff is hidden behind insane amounts of then-mandatory options, and not all of its tech is a shining example of 21st-century achievement, but it's finally a competitive choice alongside some long-time segment stalwarts.