The new Blazer makes a strong first impression with its sporty good looks and follows up with relaxed performance and smart tech.

Chevrolet's new Blazer is a throwback in name alone. Sure, it revives the Blazer nameplate, which disappeared from Chevy's lineup in 2005, but that's pretty much where the homage ends.

For starters, the Blazer's appearance draws more from Chevrolet's cars than its trucks, inheriting most of its design DNA from the Camaro sports coupe. The Blazer is angular and aggressive, from the sharp headlamps and jagged grill to the geometric profile and muscular flanks. The look gets a little softer around the SUV's upright rear end, while still looking taut and decidedly sporty. Personally, I think it's one of the best-looking SUVs in the midsize crossover class -- but I know that's not an opinion held by the rest of the Roadshow crew.

The design inside feels economical but thoughtful. The cabin's design is simple and mostly well made. There are a lot of small goodies throughout the cabin that are fun to discover. From my RS model's red accents and stitching to the illuminated USB ports to the way the central vents double as dials for the climate controls (another Camaro-like trick), I kept catching myself smiling at cool little details.

But this is also a different Blazer from a structural standpoint. For starters, it is underpinned by a front-wheel drive, unibody construction rather than rear-drive, body-on-frame setup of the old Blazer. This fundamentally makes the new Blazer more road- and commute friendly, trading the trucky ride of the old Blazer for something more akin to a large car.

The basic Blazer powertrain setup consists of a 2.5-liter I4 engine that sends 193 horsepower and 188 pound-feet of torque to the front wheels via a 9-speed automatic transmission. This is also the most efficient of the two engine options, estimated at a fairly middle-of-the-class 22 miles per gallon city and 27 mpg highway.

If you upgrade to the 3.6-liter V6, you'll be treated to 308 horsepower and 270 pound-feet of torque. This more potent version of the Blazer also features a nine-speed automatic transmission and still comes standard with front-wheel drive, but you can get V6 models with Chevy's advanced twin-clutch all-wheel-drive system -- essentially, it acts as a FWD vehicle most of the time, until rear-end power or traction is needed. Of course, going big with power comes with efficiency tradeoffs: V6 models step down to 20 mpg city and 27 mpg highway with front-wheel drive or 18 mpg city and 25 mpg highway when equipped with all-wheel drive.

The front-wheel-drive, V6 RS model impresses with its strong acceleration. The gearbox feels -- in its default setting -- tuned for efficiency, and is fairly quick to upshift through its nine gears. That can make the Blazer feel a little lazy to accelerate during passing maneuvers while the transmission sorts itself out, but it also means that the SUV has a relaxed and quiet character, both around town and on the highway.

The handling department is staffed by a MacPherson strut suspension up front, a five-link independent rear suspension and wheel-and-tire packages ranging from 18-inches for base models to 21-inch options for RS and Premier models. The electric power steering feels light and easy to use around town, while still offering fairly good responsiveness for a vehicle of this size. Still, the suspension can't overcome the laws of physics -- you can feel every bit of the Blazer's 4,017 pounds (in FWD V6 trim) when hustling around a corner.

I like the Blazer's combination of a soft-yet-controlled ride, agile-yet-easy steering and confident-yet-relaxed power delivery. These dynamics feel really appropriate for this type of crossover SUV.

The new Blazer features the latest generation of Chevrolet's cabin tech. Front and center in the dashboard is a standard, 8-inch Chevrolet Infotainment 3 system -- perhaps not the most cleverly named setup in the business, but still a well-designed one with lots of potential for future upgrades.

From the smartphone-esque home screen to the smartly organized menu structure, Infotainment 3 is intuitive to navigate and, perhaps more importantly, responsive to my taps and swipes. A new shortcut bar along the bottom of the screen links back to the homescreen and various infotainment functions. You can tap it to get status information: Tapping the 4G LTE bar quickly jumps to the OnStar Wi-Fi hotspot controls, for example.

Onboard app selection is pretty solid with major audio streaming players like Spotify and iHeartRadio making appearances. That's alongside a selection of communication apps like Glympse, a favorite of mine that allows drivers to simply and temporarily share their live location and ETA with friends and family.

A subtle but useful new feature for Infotainment 3 is the ability to register and save individual profiles, which can store everything from radio presets to software preferences to application logins on a per-driver basis. This means that my shortcuts, addresses and Spotify playlist, for example, can be kept separate from the rest of my family members', since multiple driver profiles can be saved. Driver profiles are PIN-lockable and also synced to the cloud, which will eventually allow users to bring their preferences to any GM vehicle device running Infotainment 3. Imagine hopping into a rental car on vacation and having everything set up exactly how you like.

USB-connected Android Auto and Apple CarPlay are standard, if you'd prefer to bring your own tech and apps on the road. The Blazer is available with up to six total USB ports spread between its two rows, three of which are USB-C connections. There's also an available wireless Qi phone-charging pad if you'd prefer not to plug in. 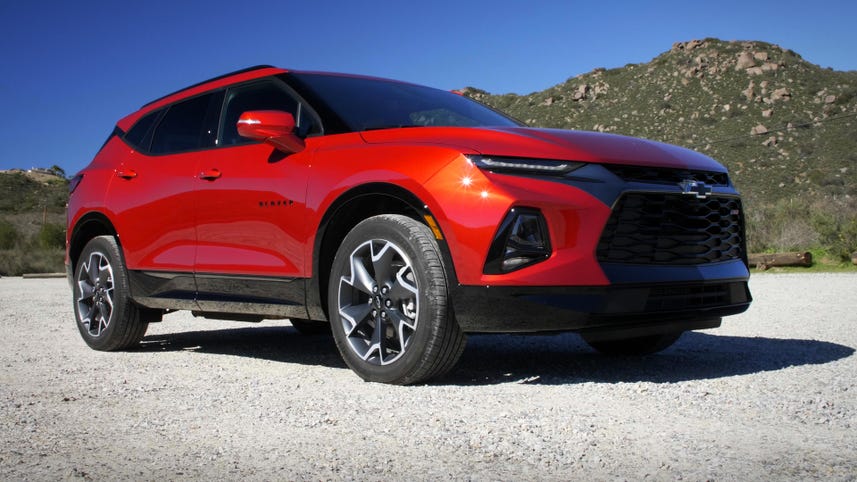 Driver aid technology is less innovative, but I was pleased to find a thoroughly modern suite of standard and optional features. Every 2019 Blazer features a standard rear camera, rear seat reminder and the company's teen driver system, which lets parents set speed alerts and audio volume limits, and get driving performance report cards for younger drivers.

My Blazer RS has the HD Surround Vision 360-degree camera, which offers a bird's-eye view of the area around the vehicle at low speeds. I also love Chevrolet's optional rear camera mirror which can be toggled between a conventional optical mirror and a live display from a camera mounted on the tailgate with the flip of a switch. This allows a wider-angle view of the area behind the car, which reduces blind spots, and an view that's not obstructed by passengers' heads or tall bits of cargo.

Pricing starts at $29,995 for the base model, known simply as the 2019 Chevrolet Blazer, and stretches to $41,795 for the sport-styled and well-equipped Blazer RS. You can climb a little higher and spend $43,895 for the feature-loaded Blazer Premier -- before options and destination charges, of course.

The Blazer's biggest competition looks to come from the new Ford Edge, which is similar in scale and price. After driving both, I'd give the early advantage to the Blazer based on my very positive first impressions of the Chevy's design, performance and Infotainment 3 tech. However, the Blazer will face stiffer competition when cross-shopped with the Hyundai Santa Fe and Honda's brand-new Passport, but I think the Blazer will fare well given its competitive price and striking style.