This sport-heavy hatchback is practically too good for its own good.

As it turns out, there's such a thing as a car that's too good. Most of the quality cars out there, at any price point, still carry a few notable flaws that remind you that humans are still in charge of building these things. Rarely does a car come along that makes you wonder if the entire development team was replaced with impossibly scrutinous robots. The 2019 Audi RS5 Sportback is one such car, and its valedictorian antics are almost frustrating in their pitch-perfect execution.

The 2019 Audi RS5 Sportback is both attractive and incredibly capable.

It's so capable that the whole experience feels a bit sanitized.

The RS5 Sportback is as close to perfection as you can get in this segment, but strangely, that leaves it feeling lacking.

So good on the road, it's maddening

It might sound counterintuitive to be aggravated by a car being too good, but that's how I felt after a week with the RS5 Sportback. Flaws add character. Whether it's getting a little loosey-goosey in the curves or being so loud it can wake the neighborhood, it's those minutiae that prevent a car from feeling like it was built by unfeeling automatons. The RS5 is the closest I've ever come to a car built for robots, by robots.

The 2.9-liter, twin-turbocharged V6 puts out 444 horsepower and 443 pound-feet of torque, and it's ready to rumble at any spot on the tachometer. A press of the pedal is met with near-immediate torque, and the eight-speed automatic transmission shifts quickly, but these rapid gear changes don't come with a comfort trade-off. It just goes, all the time. Even though the $3,350 Dynamic package adds a sportier (read: louder) exhaust system, it's still quiet enough to sneak out of the neighborhood on a morning drive, although I'm not in love with the digital intake noise pumped into the cabin to supplement the note from 'round back.

It's damn near impossible to unsettle this hot hatch. The same Dynamic package that adds the louder exhaust also adds a set of multi-mode adaptive dampers that vary from soft to stiff, depending on the vehicle mode. Even with my tester's upsized wheels and thinner 275/30ZR20 summer tires, it's surprisingly compliant over bad roads, transferring less noise and movement into the cabin than expected. At the same time, that combination also results in some serious corner grip. No matter the corner, the RS5 enters and exits it with preternatural composure.

If there's one spot that could reasonably be expected to produce flaws, it's the optional carbon-ceramic front brakes. Part of the $5,800 Dynamic Plus package (that also adds a higher speed limiter and a carbon fiber engine cover), most carbon-ceramic setups are squeaky at around-town speeds and hard to modulate. The RS5 Sportback's stoppers are neither of those things, producing predictable, smooth, quiet stopping with every press of the left pedal.

Even the fuel economy is solid; I observed numbers above the EPA-estimated 26 miles per gallon highway. You know how it was easy to get mad at the straight-A overachiever who sailed through school without trying too hard? That's about where I am with the RS5 Sportback.

Slapping a couple more doors on a car will usually incur a not-insignificant, albeit expected weight gain. But not the RS5 Sportback, no sir -- turning the two-door into a five-door added just 89 pounds. Its overachieving is not limited to performance alone.

The RS5 Sportback's looks adopt a middle-bowl-of-porridge theme: Not too hot, not too cold. The front bumper is a bit shoutier than your average A5 or S5, but not by much. Its fastback silhouette is the right amount of stylish without eating into interior space. Perhaps the most ostentatious part of the car is the pair of trombones that stand in for exhaust tips. Otherwise, all the aggression on my tester is optional: The $2,500, 20-inch alloy wheels replace standard 19s, and the all-black exterior trim is part of a $5,500 appearance package that also adds carbon fiber to the spoiler, front bumper, side sills and side mirrors.

The inside is properly good, too. While it does look a bit on the older side, the RS5 Sportback's interior puts every necessary feature within the driver's reach. Even though the vent-lookin' bits in the middle of the passenger-side dashboard are for appearance alone, I appreciate the continuity they bring to the table. The $1,500 Nappa leather package adds some very supple material to the already-comfortable sport seats. My only complaints are that the carbon fiber trim is the only kind on offer (it's a little overdone at this point) and there's only a pack of cigarettes' worth of storage under the center armrest (people carry large items, too, you know).

While you might assume that the RS5 Sportback's shape hampers visibility or rear-seat comfort, you'd be wrong. Second-row comfort is the tops, with ample headroom and legroom for a six-foot-tall passenger behind an equally tall driver. The body doesn't mess with visibility, either, offering plenty in every direction. The cargo space is fantastic, its hatchback offering depth and height that competitors like the Mercedes-AMG C63 and BMW M3 cannot.

Older tech, but age is just a number

Perhaps there's some criticism to levy at the RS5 Sportback when I look at its tech? Not really. Even though it relies on Audi's older MMI infotainment software, it's still one of the better systems on the market.

Instead of a touchscreen, the 8.3-inch screen smack dab in the middle of the dashboard is operated by a combination rotary dial and touchpad. Just ahead of the dial is a pair of quick-access toggles that let me jump quickly between the most important bits of the system -- hopping from navigation to media, for example. The touchpad is used for handwriting recognition, and Audi's system is quite good at turning my chicken scratch into legible addresses.

In traditional German fashion, though, MMI is a very dense system that might take some getting used to. There are menus within menus, and not all of them are intuitive -- vehicle settings, for example, are buried far away from the system settings, even though that might be the first place you'd look. It doesn't take long to get a grip on everything with regular use, though. The USB port on the dashboard grants access to Apple CarPlay and Android Auto, and there are two more in the second row for device charging.

Also standard is Audi's always-excellent Virtual Cockpit, which replaces the gauge cluster with a 12.3-inch screen. People who hate distraction will love being able to take the most pertinent infotainment bits -- including a full map with Google Earth overlays -- and slap it just below the usual line of sight. Swapping screens is nice and easy, too, thanks to a straightforward button layout of the left side of the steering wheel.

The RS5 Sportback's safety tech is limited to standard automatic emergency braking, but like usual, that's a problem money can fix. My tester is equipped with the $3,700 RS Driver Assistance Package, which adds full-speed adaptive cruise control, traffic sign recognition, lane-keep assist, the usual upgrades. It all works smoothly, proving that this car is unflappable whether it's a human or some algorithms in charge. It doesn't have the fancy-pants lidar of its bigger brothers A6, A7 and A8, but it's still very capable and works great on the highway. 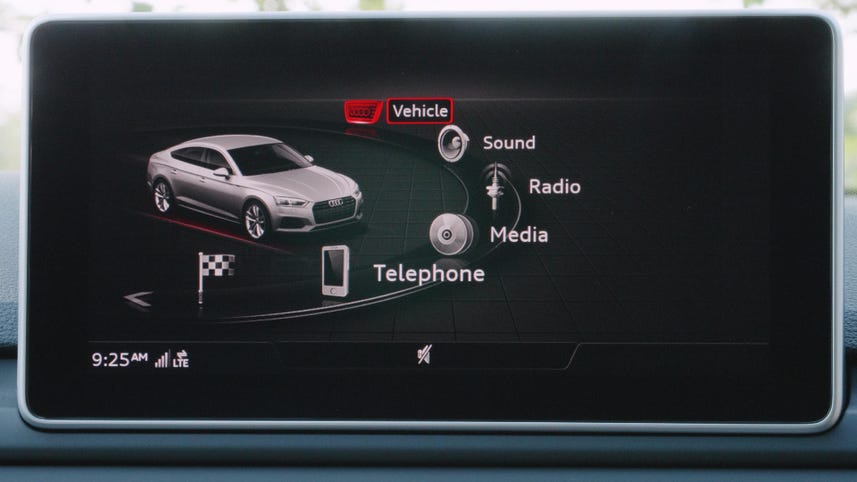 The RS5 Sportback's base price is $74,200, but my as-tested price is a bit of a squeeze at $99,990 including destination. I'm a sucker for green, so I'll drop $595 for Sonoma Green paint. I'll spend $2,500 for the same wheels as my tester, because they rule, and that choice mandates another option I would add anyway -- the $1,500 Black Optic package that replaces all the exterior chrome with gloss-black bits.

The Nappa leather is so comfortable that I'm comfortable spending $1,500 to add it in. I'll also stick with the $3,350 Dynamic package, if only for the louder exhaust. I'll also opt for the $950 Bang & Olufsen sound system upgrade. Including the mandatory $995 destination charge, that brings my total to a much more palatable $85,590.

If you're in the market for a hi-po hatchback, the RS5 Sportback is the only one in its segment, but its competitors are long-time players that have carved out their own niches. The Mercedes-AMG C63 still rocks a proper V8, and it's a real peach of a car that can serve as both a weekend joyride and a daily driver. The BMW M3 is... frankly, so filled with character flaws that I'm not even sure it's a good car anymore. There are proper coupe variants of all three cars, too, if that's more your speed.

But even if the Bimmer and Merc each spawned a fifth door, I'd still recommend the Audi. The RS5 does a fantastic job of blending everyday usability with a powertrain and chassis that are ready to party as often as Andrew W.K. Perhaps its pursuit of do-it-all perfection rankles your cankles, but at this price point, it's not exactly obscene to expect overachievement.