With a killer biturbo V6 and strong electric boost, the Panamera Hybrid is a plug-in that’s purely Porsche.

These days, hybrids are as much about mph as they are mpg. While many gasoline-electric models exist with a core mission of eking every last mile out of a drop of fuel, others use battery power to supplement performance. Don't forget: electric power equals instant torque.

Which brings me to the 2018 Porsche Panamera 4 E-Hybrid. No, this isn't the holy-crap-that's-quick, 680-horsepower Turbo S E-Hybrid (with its holy-crap-that's-expensive $184,400 price tag). But with a still-impressive 462 horsepower and 516 pound-feet of torque, the significantly cheaper 4 E-Hybrid makes one hell of a case for itself within the Panamera lineup. In fact, it might be the most well-rounded Panamera you can buy today.

Even before you get to the electric assist, the Panamera 4 E-Hybrid packs a wallop. That's because unlike the rest of the Panamera 4 lineup, which uses a 3.0-liter, single-turbo V6, the E-Hybrid gets the 2.9-liter twin-turbo V6 from the 4S models -- not to mention the lovely Audi RS5 -- mated to an eight-speed, dual-clutch transmission. It's detuned a bit here, the engine making 330 horsepower and 331 pound-feet of torque, compared to 440 horsepower and 405 pound-feet in non-hybrid 4S. But add in the extra 136 horsepower and 295 pound-feet of torque from the electric motor, and the E-Hybrid has a significant power advantage over the more expensive Panamera 4S.

When you start the Panamera 4 E-Hybrid, it defaults to E-Power drive mode, indicated by a light under the "E" in the 12 o'clock position of the drive selector dial on the steering wheel. With a fully charged battery, you can travel up to 31 miles on electric power alone, at speeds up to 86 mph. In my mixed driving style (and with a decidedly heavy right foot), I usually only get about 20 miles per charge, which still isn't bad. Go easy, and I have no doubt a longer EV life is possible. Oh, and do yourself a favor and opt for the 7.2-kW onboard charger ($840). With that installed, you'll recharge the battery on a 240-volt outlet in a little under 3 hours.

Switch the dial to "H," or just let the battery deplete, and you'll get to Hybrid Auto, which uses the car's big ol' brain to intelligently switch between engine and battery power. Within the "H" selection, you can also enter an E-Charge mode, which uses the combustion engine as much as possible and regeneratively charges the battery. On the other hand, E-Hold mode maintains the battery's state of charge and relies solely on the engine for power.

Sport ("S") mode works exactly like you'd think it would, stiffening up the air suspension -- which is standard on the 4 E-Hybrid, by the way -- and upping the throttle response. Sport Plus ("S+") turns the whole thing up to 11. And while the battery is only regeneratively charged to its minimum level for boost capacity in Sport mode, it'll fully recharge in Sport Plus.

If these drive modes -- and drive modes within drive modes -- seem overwhelming, friend, you're not alone. While part of me likes the ability to change between different settings depending on driving style, in reality, I find myself starting the car, driving in E-Power until the battery runs out and switching to Hybrid Auto, or turning on Sport Plus when I'm feeling frisky. Speaking of which, remember, the drive mode dial's center button works as a sort of "push to pass" power mode. Give it a press, and the powertrain calls up both maximum electric and turbocharged boost for a full 20 seconds. Whee!

I've often called the Panamera a "four-door Porsche 911," and nothing about the E-Hybrid package changes my opinion. I love the effortless electric thrust around town, and when the 2.9-liter V6 fires up, there's a deep, raspy howl from the exhaust. It's extremely civilized when I'm commuting, yet turns into a tactile performer when hitting my favorite canyon road.

Yes, the all-wheel-drive 4 E-Hybrid is heavy, but because the added weight is all situated in the rear, it actually improves the Panamera's weight distribution -- the result is a 49/51 fore/aft balance. And with a little more weight over the rear wheels, the Panamera feels firmly planted and hunkered down in corners. Nicely weighted steering offers tons of feedback with sharp response, and the optional rear-axle steering of my test car ($1,620) is a must-have if you frequently find yourself on winding roads. All this great dynamic tuning really masks the sheer size and weight of the Panamera 4 E-Hybrid. Drive the bejeezus out of this thing and it'll respond exactly the way you'd expect from a Porsche. Which is to say, brilliantly.

It'll look the part, too. All the fussy quirks of the first-generation Panamera have been sorted out in this second-gen model, and the result is a slick hatchback that looks great from all angles. I even love the E-Hybrid-specific acid green accents on the car's badges and brake calipers, especially against the decidedly staid volcano gray of this test car.

More acid green touches adorn the cabin, though they're minimal, and tasteful. You'll find the neon brightwork on the needles for the tachometer and Sport Chrono dash clock. There's also a series of lights at the base of the tach that show how much power or charge you're using at any time, and while it's kind of cool, the bright green illumination can be distracting, especially at night.

That aside, the E-Hybrid's cabin is like that of any other Panamera. There's seating for four, with a full-length console running between both the front and rear seats, and the raked center console with its flush-mounted, backlit buttons is still one of the coolest bits of cabin work in the business. This really feels like an interior befitting of a nearly $100,000 car, with great materials on every surface, impeccable fit and finish and a super clean, modern design.

Plus, fold the rear seats and you've got a great big cargo area in back. Having the battery housed under the load floor does impede cargo space a bit -- the 4 E-Hybrid has a maximum of 44 cubic feet of cargo space, compared to 47.3 in the normal Panamera 4. The storage bag for the charging cable takes up a fair amount of room in the cargo hold, as well.

Lovely tech, but no Android Auto

I'm a big fan of Porsche's Communication Management (PCM) infotainment interface, housed in a 12.3-inch horizontal touchscreen in the Panamera's dash. With crisp graphics and quick response times, it's one of the better systems in the luxury space. There's even a special "Hybrid" screen specific to this model, with detailed information about the different drive modes, energy usage and power flow.

The reconfigurable gauge cluster works a treat, as well. The center tachometer is a fixed piece, but the left screens are crisp, digital displays, the outermost circle allowing me to toggle through different trip data. To the right of the tach, you can either show a pair of displays that mimic the design of the left bank, or a large map screen that spans the width of both sections. The only thing to note: with the full map displayed, the fuel gauge is hidden. Mind your consumption.

PCM has an onboard Wi-Fi connection, and the system never stumbles while inputting navigation destinations using voice commands. But Porsche still hasn't added Android Auto to its phone integration software, which is a pretty glaring omission. Oh well. At least Porsche isn't charging for Apple CarPlay.

Look, if you have a couple hours to kill, I highly recommend playing with Porsche's online configurator. There are seemingly endless build combinations, and just about every option can be had á la carte.

All in, my dream Panamera 4 E-Hybrid is an eye-watering $145,310. A more reasonably equipped version like my test car will set you back $112,740, including $1,050 for destination. And don't forget, Porsche also sells the 4 E-Hybrid in sexy Sport Turismo guise. Hmm, back to the configurator...

The best of all worlds

The Panamera 4 E-Hybrid does everything well. It's comfortable and compliant, a total tech powerhouse, a silent and efficient EV around town and a super sharp sports car when you're blessed with great roads. But it's also $99,600 to start, so it's obviously not for everyone.

On the other hand, it's also like nothing else on the road today. Other luxury plug-ins like the BMW 740e or Cadillac CT6 PHEV aren't half as good to drive. A Mercedes-AMG CLS53 is pretty nice, but its electric assist doesn't result in any actual EV range. You could also go full EV and get a Tesla Model S, but let's be honest, a purely electric vehicle still doesn't make sense for a lot of people.

As a PHEV sports car, the Panamera 4 E-Hybrid has few faults, and few competitors. You definitely get what you pay for. Just go easy on the options. 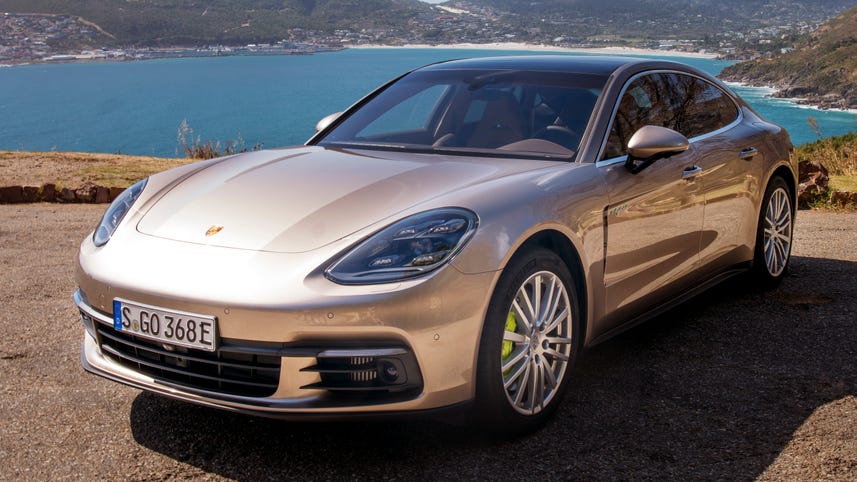