The Mini Countryman scales up for 2018 which also makes room for a new 65-mpge plug-in hybrid model.

Spanning 169.8 inches from bumper-to-bumper, the second-generation Countryman is the longest and largest model in the Mini lineup. But despite its relatively massive size, the Cooper S E Countryman tested here is the most fuel-efficient model in the automaker's stable, thanks to its plug-in hybrid system.

The Mini Countryman's plug-in hybrid system has the potential to deliver up to 65 mpge. Its Mini Connected tech is easy to use and fun to interact with. The torquey hybrid system makes for responsive performance during urban driving.

The cabin controls are poorly placed, making them awkward to use and potentially distracting. You only get 12 miles of EV range per charge. Driver aid systems are surprisingly limited for such a high-tech vehicle.

Yes, the 2018 Mini Countryman PHEV is the most fuel-efficient Mini, but only if you plug in often. Without regular recharges, it becomes difficult to justify the price premium for relative small mpg gains.

The Mini plug-in hybrid system is a bit unconventional. Up front there's a 1.5-liter, three-cylinder turbocharged gasoline engine that makes 134 horsepower and 162 pound-feet of torque. It's mated to a six-speed automatic gearbox that sends power to the front wheels.

Meanwhile, the rear axle is home to an 87-horsepower electric motor that generates an additional 122 pound-feet of torque, which it sends to the rear wheels via its own two-speed gearbox. This e-motor is able to power the Countryman by itself, which technically makes this the only rear-wheel drive Mini -- at least, part of the time.

A 7.6-kWh battery pack powers the e-motor and can be recharged plugging into a 220-volt charging station for 2 to 3 hours. Additional juice can also be drawn from the gasoline engine and regenerative braking system. A fully charged battery nets the Countryman up to 12 miles of fully electric cruising before the gasoline engine has to kick in, extending the total range to around 270 hybrid driving miles.

Total system output for the all-wheel drive hybrid Countryman is 221 horsepower and 284 pound-feet of torque. (This is one of the few instances where hybrid math is just simple addition.) The battery pack and electric motor bump the Countryman's curb weight up to a hefty 3,900 pounds, which you can really feel when cornering and braking. But the extra electric torque means the plug-in hybrid still sprints to 60 miles per hour in 6.7 seconds -- a pretty good bit of get-up and go.

Most people who pay the price premium for the plug-in hybrid Countryman are likely more interested in economy than outright performance. For the first 12 miles of electric driving, the Countryman PHEV returns an EPA-estimated 65 miles-per-gallon-equivalent (mpge). After that, the economy drops down to 27 mpg combined until you recharge again.

To aid you in managing your electric charge and economy, the Cooper S E Countryman features a trio of "eDrive" modes. Auto eDrive is the default setting that puts the computer in charge of how to balance the EV and internal combustion engine's (ICE) use. Usually, this means using the battery until it's drained, unless you really stomp the accelerator, and then rely on the ICE for extra driving. Save Battery will reserve a preset battery level until deactivated. It's useful for holding back a bit of EV range for the end of a long highway segment, for example. Finally, Max eDrive forces the system to use only EV power until the battery is depleted, no matter how hard you mash the throttle.

The 2018 Countryman is 8 inches longer and an inch wider than its predecessor, riding on a 3-inch longer wheelbase. That means there's a bit more space for shoulder and headroom up front and much more second-row legroom. The tall seating position offers a commanding view of the road and great 360-degree visibility via the large greenhouse… which is great until you need to interact with any of the Mini's controls.

I find the Countryman's cockpit awkward. All of the dashboard controls for climate and driver aid systems are located far down on the center stack, requiring a long reach. On top of that, some are toggles, others are buttons and all of them require me to spend time looking way down into the depths of the center stack to figure out where everything is housed. Overall, the Mini requires too much "eyeball time" per interaction where I'm not looking at the road, and just feels unsafe to do simple things like adjust the cabin temperature at speed.

The physical controller for the Mini Connected infotainment is even trickier to reach, nestled low and rearward on the center console. You develop muscle memory for the controller's position after a while, but its location places my wrist at an awkward, painful angle.

The rest of the interior raises even more complaints. The $300 Cooper S Sport seats feel flat and unsupportive. The multi-information display in the instrument cluster shows useful information about the hybrid system, but it's too small and requires you to cycle constantly through many tidbits of info. And the head-up display that rises out of the dashboard is too low to really be of much use and can be difficult to see from some seating positions.

Overall, I get the feeling that Mini put a lot of effort into the style of the Countryman's cockpit at the expense of overall functionality. Oddly, I don't recall having any of these issues with the slightly smaller Clubman, leading me to believe that the Countryman's tall seating position is the source of most of my nitpicks.

The base Countryman comes standard with a 6.5-inch multifunction display in the center of the dashboard and supports certain phone app integrations. The plug-in hybrid, meanwhile, comes standard with an 8.8-inch Mini Connected touchscreen system with navigation, wireless phone charging and enhanced Bluetooth. We'll gladly take that upgrade -- this is a solid system.

Basically, what you're getting is a reskin of BMW's iDrive infotainment system with Mini-specific graphics, colors and cool animations. I'm embarrassed to say that the new look makes the system more fun to use. This is one area where Mini's obsession with style has paid off. 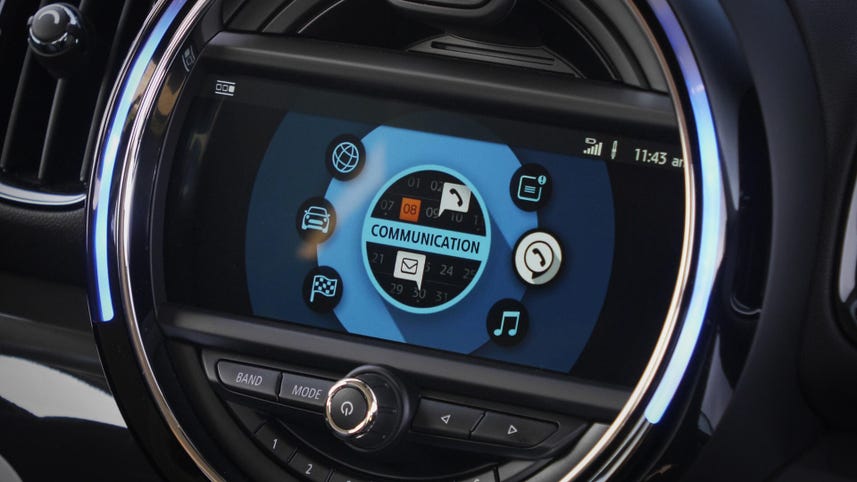 Mini Connected can be controlled via the awkwardly placed but still intuitive rotary controller on the center console, or via the touchscreen when parked or stopped. The controller can be twisted, bumped or pressed, and has a touch-sensitive top surface that can be swiped or written on with a fingertip to input a destination for navigation.

The Mini also has a solid voice command system that almost makes up for my aforementioned ergonomic gripes. Like iDrive, Mini Connected has a solid selection of digital and analog media sources, and is compatible with Apple CarPlay, but not Android Auto.

Perhaps my favorite cabin tech feature is a cool LED ring that surrounds the Mini Connected system. Harkening back to the old center speedometer of previous generation Minis, this LED ring can serve a variety of functions ranging from a massive tachometer to a visual indicator for the parking distance sensors and so much more. There are almost a dozen functions available, any of which can be enabled or disabled in the Mini Connected menu system. It's another fun touch that makes the Mini's cockpit look cool, while adding a bit of low-distraction functionality.

The Countryman comes standard with a rearview camera and rear park distance sensors, which aid in parking, as well as automatic headlamps and windshield wipers.

This example has an optional $500 enhanced parking assist system that adds distance sensors to the front and rear. An extra $1,000 would bring adaptive cruise control to the party, but my example is not so-equipped.

And that's pretty much it. No blind-spot monitoring. No semiautonomous parking assist. No lane-keeping assist or departure warning. As high-tech as its powertrain is, the Mini Countryman's driver aid suite has a number of large holes in it.

The 2018 Mini Cooper S E Countryman All4 plug-in hybrid starts at $36,800 and it comes fairly well-equipped for the money. My example stickers for an even $40,000, including a host of options and an $850 destination charge.

That starting price is a $5,100 premium over the $31,700 nonhybrid Cooper S Countryman All4 with its 189 horsepower, 2.0-liter turbo and 26 combined mpg. If you recharge often and have a relatively short commute, the 65-mpge estimate for the first 12 miles has the potential to dramatically increase efficiency and reduce the operating costs of the Countryman. (Especially if you qualify for the up-to-$4,000 tax credit incentive for plug-in vehicles.)

Plug-in hybrids, however, are especially susceptible to the "your mileage may vary" rule of thumb and are highly sensitive to your driving and charging habits. 12 miles of EV range per charge isn't that much when you think about it, which means you'll have to plug in often to see a benefit.

So, if you're not the type to plug in at home, at work and while out running errands, or if most of your miles are logged on long highway stretches, your fuel economy will likely hover in that 27-mpg range, which, to my mind, is hardly worth the extra expense, complexity and weight for the single-digit mpg boost over the non-hybrid Cooper S.