Between its turbocharged Quattro performance and some of the best tech in the biz, Audi's A4 holds a very strong position in its class.

The A4 was, for a long time, my favorite vehicle in its class of entry-level luxury sedans. Then Audi introduced the A5 Sportback, with its deliciously coupe-like profile, sporty performance and flexible liftback design, and I haven't been able to look at the A4 the same way since.

The 2018 Audi A4 is packed to its gills with class-leading cabin and driver-aid technology including available Traffic Jam Assist and Audi MMI with Virtual Cockpit. Turbocharged performance with Quattro is good for spirited passages while still being daily-driver friendly.

Though it’ll likely age well, the A4’s exterior design is also a bit bland relative to Audi's own A5 Coupe and Sportback models, as well as the competition from BMW.

The 2018 Audi A4 sedan offers one of the segment’s best-balanced driving experiences with excellent tech, respectable performance and classic looks that fly under the radar. Looking for a bit more panache? Consider the nearly identical A5 Sportback.

But that's all subjective. For the driver looking for a traditional compact sedan with a discrete trunk, classic good looks, plus some of the best cabin and safety technology on the road, the 2018 Audi A4 is still one of the finest choices in its class.

Like the other members of the A4/A5 family, the A4 Sedan is powered by Audi's 2.0-liter turbocharged four-cylinder engine, producing a healthy 252 horsepower and 273 pound-feet of torque. That torque is quite accessible, coming on smoothly and strongly from just 1,600 rpm, helping the A4 feel nice and responsive around town and nimble off the line.

But unlike the A5 Sportback, which is only offered with all-wheel drive and an automatic transmission, the A4 can be had with three different drivetrains.

The best setup for dynamic performance is Quattro S-tronic. The seven-speed, dual-clutch S-tronic transmission is really sweet, with smartly chosen shift points aiding in quick acceleration and a smooth overall demeanor. Here, it's mated with Audi's excellent Quattro all-wheel-drive system that can send as much as 70 percent of the engine's torque to the front axle or up to 85 percent to the rear. The split is continuously adjusted, but all four wheels always get some share of the power.

This sportiest configuration is good for a 0-to-60 sprint of just 5.7 seconds before carrying on to a (limited) top speed of 130 miles per hour. At the thriftier end of the performance spectrum, you're looking at 24 miles per gallon city, 34 mpg highway and 27 mpg combined -- not bad for this class, and competitive with the BMW 330i xDrive (27 mpg combined) and the Mercedes-Benz C300 4Matic (26 mpg combined).

A six-speed manual transmission is available for the A4 Quattro, granting drivers the satisfaction of shifting with three pedals. However, this choice also comes with a different version of Quattro all-wheel drive. Known as "Quattro with Ultra technology," this is Audi's on-demand AWD setup, which defaults to front-wheel drive under most conditions and only sends power to the rear while cornering or if slip is detected.

Curiously, this on-demand setup doesn't save the A4 any fuel. City and combined estimates are the same as the S-tronic, while the highway estimate drops to 33 mpg. It seems the S-tronic's extra seventh cruising gear gives it an economy advantage.

The most efficient A4 trim is the purely front-drive "Ultra." Featuring the seven-speed S-tronic gearbox but not the Quattro rear differential or driveshaft, this lighter model climbs to EPA estimates of 27 city mpg, 37 highway mpg and 31 combined mpg.

However, that added fuel economy comes at a performance cost. In this configuration, the 2.0-liter engine steps down in power to 190 horsepower and 236 pound-feet of torque -- likely to keep traction in check with half the number of driven wheels. The 60-mph sprint now stretches to 7.1 seconds; that's still not too bad for a premium commuter.

The tuning of the A4's four-corner, five-link independent suspension fels a bit milder than that of the A5 models. The sedan is more relaxed and comfortable around town and over bumps. At the same time, it still feeling nice and planted in corners, with the Quattro system helping to rotate the car through each bend without much of the understeer that many AWD systems sometimes exhibit.

All A4 models feature active acoustics that use audio processing and speakers to cancel out undesirable road noise. This results in a quieter cabin and less driver fatigue on long rides. However, this system also generates a bit of fake noise to sweeten the engine note when in its sportiest mode. Thankfully, the A4's system is significantly less aggressive than the A5 Sportback that I recently tested, and I appreciate that the sedan's performance sounds less artificial for it.

MMI Plus tech with Virtual Cockpit

Part of what makes the A4 such a great daily tool is its cabin technology.

The standard MMI infotainment suite uses a 7-inch Nvidia-powered setup manipulated by a physical control knob on the center console. Standard Android Auto and Apple CarPlay connectivity lead a beefy list of digital and analog media sources. However, upper trim levels and option packages bump things up to MMI Plus, which includes a larger 8.3-inch screen, navigation and an MMI Touch controller with handwriting recognition.

My personal favorite tech upgrade is the available Virtual Cockpit, a 12.3-inch digital instrument cluster display that can be customized to display everything from traditional gauges and driving information to a large map for navigation. Pretty much all of the major MMI infotainment functions can be handled here with simple steering wheel controls, making Virtual Cockpit a feature worth paying for.

For starters, the Audi Pre Sense City system is standard equipment on all models, rolling in forward precollision warnings with automatic brake assist. The system is able to detect both other vehicles as well as pedestrians. 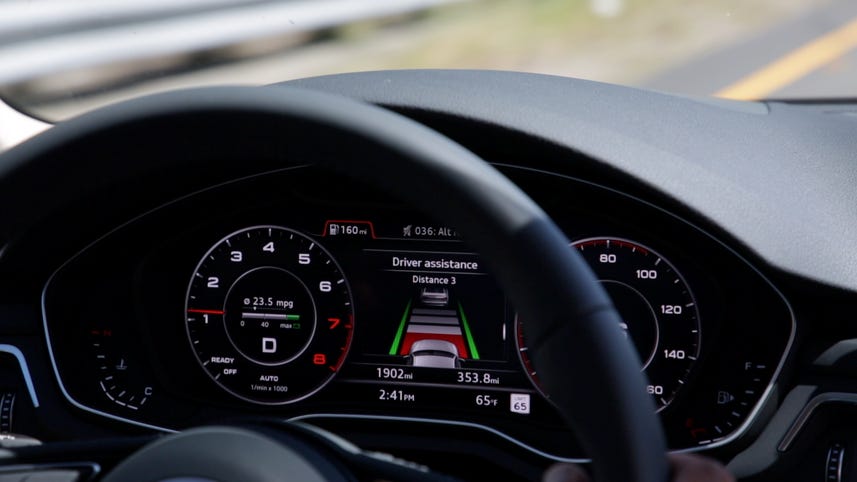 Optional upgrades worth considering include adaptive cruise control with traffic jam assist, which not only maintains a safe following distance in stop-and-go traffic but also adds steering assist that automatically keeps the vehicle in line with the car ahead and between lane markers. This is a hands-on system; it will disable if you try to go hands-free.

At higher speeds, more familiar lane-keeping steering assist helps assure that the car stays where you want it, but doesn't attempt the same level of lane-centering that the low-speed system does. It just keeps you between the lines.

Audi's blind-spot monitoring system is an interesting one. Not only does it watch your back during lane changes and when you're reversing out of blind parking spots, it also remains active after you've parked roadside to monitor for upcoming cars. This vehicle exit assist system is extremely helpful for preventing "dooring" other cars and potentially cyclists, too. It's a small touch that goes a long way for safety.

The A4 2.0T Ultra is the least-expensive and most fuel-efficient version of the A4 sedan, starting at $36,000 for the base Premium trim level.

However, for those interested in the "sport" part of this sport sedan, I recommend the S-tronic Quattro. It's got more power than the Ultra and the best version of Audi's all-wheel-drive system for maximum performance. While I'm checking boxes, I'd step up to the Prestige trim level, bringing the sticker price to around $50,000.

That gets you all of the driver-aid tech including adaptive cruise with Traffic Jam Assist, all of the cabin tech including MMI navigation and Audi Virtual Cockpit and an amazing 755-watt Bang & Olufsen audio system.

My 2018 Audi A4 Quattro sedan stands near the top of a class that includes the aforementioned BMW 330i xDrive and Benz's C300 4Matic. Performance and efficiency for these rivals are all in the same ballpark, but the A4 boasts a slight price advantage and by far the most impressive tech of the three.

Those looking to save a few bucks or for something less German should also consider the Cadillac ATS or Jaguar XE. As close to similarly equipped as we could get these rides, both sticker for thousands of dollars less than the A4. Both come with some cabin and driver aid tech compromises -- especially the Jag -- but each also places more emphasis on handling and performance than the more relaxed Audi, which should appeal to more spirited drivers.

However, if I were shopping for a premium sport sedan, Audi's own 2018 A5 Sportback Quattro would rank just above the A4 at the top of my short list. Though not a "pure" sedan, the Sportback does everything a sedan does with just a bit more flair. Both cars offer the same class-leading cabin and driver-aid tech, but the more flexible liftback design and the attractive, coupelike stance and silhouette of the Sportback are a one-two punch of better function and form than the traditional three-box sedan. Sharper handling -- thanks to sportier tunes for its suspension and Quattro systems -- seals the deal.

You can't really go wrong either way; both are excellent (and, frankly, nearly identical) choices, but I give the edge and the nod to the stylish A5 Sportback over the subdued A4 sedan.