2017 Toyota 86 review: All the performance you really need

With its incredibly precise handling and ability to run at high revs forever, you can get more out of the Toyota 86 on public roads than you can get with much higher performance sport cars.

205 horsepower may not sound like a whole lot in this era of muscle-bound hypercars, but when it powers one of the sharpest handling cars you can get, it's enough. That was my thought while piloting the 2017 Toyota 86 up a twisting mountain highway in Southern California.

The 2017 Toyota 86 backs up its compact sports car looks with exceptional handling and an engine that feels happy to run all day at high rpm. Despite a stiff suspension, Toyota manages to tune in reasonably comfortable ride quality.

Dashboard electronics only cover the basics, with Bluetooth phone and digital audio sources, but no navigation, Android Auto or Apple CarPlay. As is typical for a two-plus-two coupe, rear seat and cargo space is minimal.

The 2017 Toyota 86 makes for an excellent little sports car, its focus more on handling than power, while proving comfortable enough to drive on a regular basis.

The 86 thrilled me with short throw shifts from its six-speed manual, the engine sounded perfectly happy with the tach needle brushing 7,000, and the front end moved in perfect sync to my every steering input.

I can't imagine more true driving pleasure than that afforded by the Toyota 86, even when compared to finely honed machines such as the BMW M3, where capability far exceeds what you can reasonably put them through on public roads.

To inaugurate the transition of the previous Scion FR-S model to the new Toyota 86, bringing the model name in line with worldwide markets, Toyota gave the two-plus-two-seat coupe a few upgrades to performance and the cabin.

This newest version of Toyota's surprising little sports car treated me to interior surfaces covered in Granlux, a suede-like synthetic material, and a very grippable steering wheel with an even smaller diameter than previously. On the outside, a bigger front intake makes the car look more aggressive and standard LED headlights give it a high-tech edge. There are "86" badges adorning lights and fenders.

More importantly, Toyota tightened the 86's suspension, giving it a stiffer rear anti-sway bar as one of a few improvements. The 86 comes with either a six-speed automatic or a six-speed manual transmission, and those who choose the latter get a bonus, an extra five horsepower and five pound-feet of torque. As if you need any more reason to choose the manual over the automatic in the 86.

The 86, Toyota's most passionate car

The engine remains basically the same as in the previous model, a Subaru-derived 2-liter flat four block fitted with Toyota's D-4S fuel injection system, which uniquely changes between port and direct injection depending on the driving demands. The engine uses port injection for slower speeds and sedate driving, because it produces less noise and vibration, and switches to the more powerful direct injection when you're keeping the revs high and slamming through the corners.

With the manual transmission, you get 205 horsepower and 156 pound-feet of torque, while those thinking of opting for the automatic should learn to drive stick. Really, I'm serious.

During one of two separate drives, I got behind the wheel of an 86 fitted with a few TRD options, including wheels and exhaust. The former I could do without, but the latter gave this little engine an impressive note. From the start, the shifter felt precise, and slotted easily through its pattern, resisting missed shifts. Likewise, the clutch action felt light, letting me make fast shifts.

The 86 is the kind of car that you shoot down a twisty section of road, then turn around so you can do it again.

In the turns I was absolutely thrilled with the 86's response. The front end moves incredibly quickly and the body feels stiffer than most cars. I easily took turns marked for 35 mph at twice that, with the car not even bothering to slip the back end out. More remarkably, the ride quality remained very comfortable, with reasonably pliant dampers. The 86 is the kind of car that you shoot down a twisty section of road, then turn around so you can do it again.

As I pushed the engine toward redline, a red light flashed on the center-placed tachometer, a quick reminder that it was time to upshift. But the 86's engine sounded perfectly smooth with revs held at 7,000. As much as I was having fun, I did note a lack of action from the throttle at high rpms. This engine readily gives you its all, but doesn't have much left in reserve.

In a typical automotive trade-off, the 86's eye-catching design covers a lack of practicality in the cabin. Although Toyota claims a passenger capacity of four, folks in the rear seats will find their knees at eye-level. Cargo capacity measures a mere 6.9 cubic feet in the trunk.

Ditch the passengers and throw overnight bags in the rear seat, and you've got the beginnings of a great weekend. Despite its stiff suspension and precise handling, the 86 actually delivers a civilized ride. The dampers contain enough fluff to smooth over rougher pavement. In fact, the 86 could even work as a decent commute car, although getting into its low-slung cabin every day may become tiresome.

At an EPA-rated 21 mpg city and 28 mpg highway, the 86 isn't the most economical car around, so don't expect much freedom from the fuel pump, especially considering its 13 gallon tank.

For cabin electronics, the 86 gets a 7-inch touchscreen head unit, standard for stereo and Bluetooth hands-free phone calls. I was disappointed to see that this unit is a carryover from the FR-S, and doesn't support navigation. Toyota's latest Corolla gets a similarly sized touchscreen that includes integration with a free, third-party navigation app. Now that the 86 is under the Toyota brand in the US, the company should line up its electronics with its siblings, but that may take a model year or two. 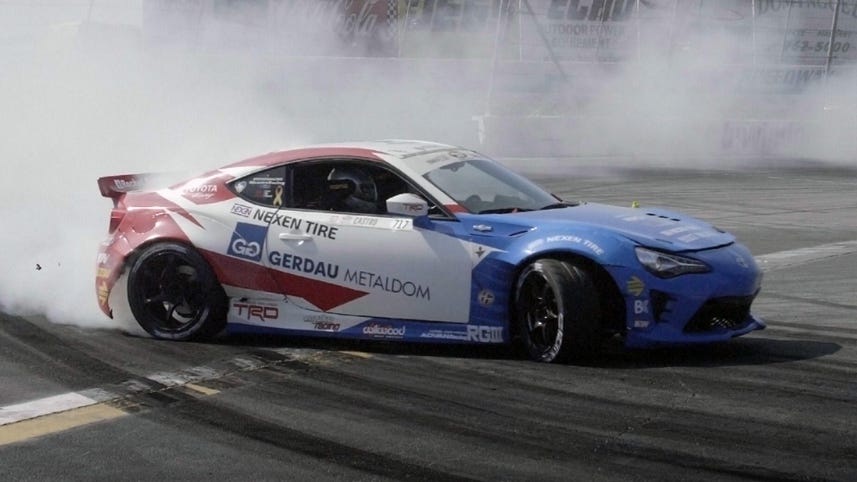 Take a master class in drifting in the Toyota 86
7:53
Watch Now

Given the likely young demographic for the 86, it would be really nice to see Android Auto and Apple CarPlay supported, but those features are not available. The existing head unit, however, fits the double-DIN standard, and would not take much to upgrade.

Toyota offers the 2017 86 as a single-spec vehicle, at a base price of $26,255. You will pay about $300 more for the automatic transmission, so best to stick with the manual and pay off a friend to teach you how to use the clutch. If you really want to spend more, there are a few worthwhile TRD accessories. Consider the $639 lowering springs, $425 performance air intake and $195 Quickshifter, all pretty reasonably priced to up the performance ante.

What I found most refreshing about the 86 is its pure sportiness. It drives just like it looks, and comes in at a low enough price to serve as a second or third "fun" car for a family. Although a convertible, the Mazda Miata serves as a pretty good sports alternative. Among hard tops, compare the 86 with the British-styled Mini Cooper S or the Ford Fiesta ST. All of these cars make for good driving times.