Even though Tesla's Model X has been on the market for over a year now, it still feels like an SUV from the future.

It's been over a year now since the Model X stumbled its way to market. It was unfashionably late and the first cars to roll off the assembly line were riddled with problems, but none of that stopped the thing from being a car that put the industry on notice, gathering a lot of attention from a lot of people who generally couldn't care less about cars -- especially SUVs.

Those doors are still frustrating to live with, and while it's a clean design, it's far from sexy.

A three-row, all-electric supercar that will amaze at every turn.

But the Model X isn't just an SUV. It's an electric SUV, of course, but it's a lot more than that, too. It's quicker than most sports cars on the road, yet far more practical and more comfortable. It offers a selection of luxury appointments rarely found on cars not costing well into the six figures and it manages to fit three rows of seats in a distinctive shape in a segment full of me-too crossovers.

The Model X is an interesting proposition, but now in its second year of full production, is it still the car of the future it was in 2016?

If you read my full review of the Model X last year you could probably tell that I enjoyed the thing but left feeling a bit conflicted about a few aspects. While this is still very much the same car as last year, a few significant updates for 2017 do move it forward in some key areas.

The first is practicality. While the middle-row seats in the initial Model X looked majestic on their pedestals as they moved serenely forward and back, they were way too damn slow in exposing the third row and, worse, they didn't fold flat.

Now, buyers have a few different middle-row configurations to ponder, with room for either six or seven. Crucially, that middle row now folds flat. It's still too slow to get out of the way and provide access to the back, but baby steps.

Additionally, the Model X now uses Tesla's new synthetic covering on all seats rather than the animal hide of yore. While some purists may scoff at this, I assure you this ain't your typical bargain bin pleather. I was surprised to really like the feel of the stuff, and those with ethical concerns about such things can feel a little better about their purchase. 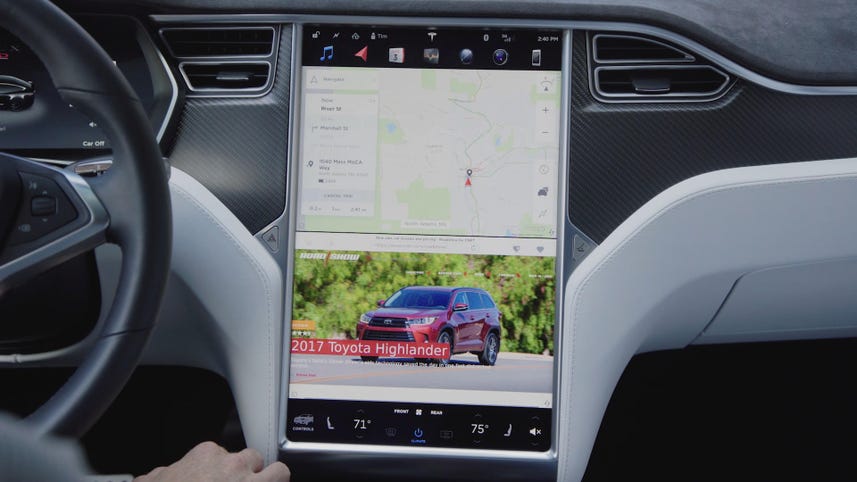 Another improvement comes in range. Tesla now offers a 100 kilowatt-hour battery pack option, which gives a realistic 295 miles of range. That's up about 40 miles over last year, and to be honest even that figure felt like plenty. But, while the car didn't need more range, a little more comfort room never hurt.

The Model X didn't need to be any faster, either, but that didn't stop Tesla from making it so. The top-shelf P100D will sprint from zero to 60 in 2.9 seconds, up two-tenths from last year's quickest. That's frankly ridiculous for any object that weighs 5,500 pounds, but I love it.

The final big change? Autopilot, and I'm sorry to report that it's not all good news there. Tesla's shifted the Model X to the second-generation of Autopilot, called AP2, and has been working hard to bring this new system up to the same level as the previous. And, on the highway, it definitely is. In my testing on major roads the Model X smoothly and cleanly stayed centered within its lane, speeding up and slowing down to keep with traffic, changing lanes on its own with a touch of the turn stalk, even coming to a complete stop in gridlock.

It's off the highway where things still need work. Last year, the Model X was nervous at times but felt pretty competent at identifying lanes on secondary roads and steering itself around. Now, the car feels jittery and unpredictable, frequently getting confused at junctions or anything more than a very gradual turn.

On the highway, AP2 is a blessing and takes a lot of the tedium out of long drives, especially long traffic jams, but as soon as you find your exit I recommend leaving it off. It's just not ready for prime time.

I tested a Model X for a week, covering hundreds of miles on highways and byways, and since just about everyone asked me how far it'll go on a charge, I'll start there.

The Model X 100D will go up to 295 miles on a charge, but if you opt for the higher-performance P100D that drops slightly to 289. And that's not a number that only a semi-drafting, AC-avoiding hypermiler has any chance of hitting. That's a realistic figure, and while I never got that far on a single charge, I came pretty close -- despite numerous uses of the Model X's Ludicrous mode.

When set to maximum power mode, the Model X is pretty astonishing. The acceleration is brutal and the throttle response instantaneous, but the real beauty is just how accessible it is. Any speed, any time, just dip your right foot slightly and you'll quickly be surveying the depths of the padding of the car's headrests. And, while some will lament the lack of a snarling engine note to go along with it, that does mean you can be a little more liberal with the throttle without waking the neighbors.

That you can take up to six other people along with you to experience this acceleration helps, too. Seating in the way back is still best reserved for those very short of stature, but the new second row is still plenty comfortable, and the front seats are great. Every spot in the Model X is heated, useful for chilly mornings, but somehow ventilation is still missing. In a car that breaks $100,000 with just a few options, that feels like an increasingly major oversight.

The dashboard, too, is in need of a refresh. Tesla's big, vertical touchscreen was groundbreaking when we first saw it on the Model S and the concept is still sound, but the performance here is definitely lacking. It feels like the system is trying to do too much with too few processor cycles, and the absence of both Android Auto and Apple CarPlay is a curious thing for an infotainment system that was once so progressive.

Finally, there are the doors. The falcon-wing units at the rear of the car do feel slightly faster than they were on the car I tested last year, but they're still plenty slow enough to be annoying. More problematic: They won't open in my garage. And yes, while you can use the Tesla app to wirelessly summon the car to pull out of the garage and open the doors, the whole point of owning a garage is so that I don't have to walk through the rain or snow in the morning.

How I'd spec mine

The Model X in its most basic trim, the 75D, starts at $79,500. For that you get a significant 237 miles of range and a zero-to-60 time under five seconds. That's nothing to scoff at, but while I'm typically a practical, frugal shopper, I say that if you're going to go big, you should go big.

The car you see pictured here was a fully spec'd P100D with just about every option. The sticker price? $177,000. Not cheap, but just look at the competition

So what do you pit the Model X against? Well... that's actually pretty tough. There are plenty of three-row luxury SUVs on the market in a similar price range, and you can for example get yourself into a lovely new Land Rover Velar for similar money. But, that of course burns gas and won't get you about town nearly as quickly. It will, however, fare much better off-road. It also looks a fair bit sexier in my book, too.

To match the performance here you have to step up to something like a Bentley Bentayga, but for that you're looking at spending at least $230,000.

The Model X is not a perfect car. AP2 still needs work, the infotainment system feels curiously dated and I still hate those falcon-wing doors. But the improvements in range, performance and overall quality of the car mean I have far fewer reservations recommending it than I did in 2016.

A year later, there's still nothing like the Model X on the road. Driving it feels like driving the future, and while it's not for everybody, if it's for you you're in for a pretty special experience.