As I spent a week in the 2017 Kia Cadenza, I heard the same refrain again and again, "That's a Kia?" The incredulity was understandable, since Kia built up a reputation as an economy brand, yet the Cadenza shows off elegantly subtle styling.

A gorgeous design and a full plate of driver assistance features, such as adaptive cruise control and a head-up display, make the 2017 Kia Cadenza a very desirable car with a price that beats the pants off the competition.

Apple CarPlay and the Cadenza's onboard navigation conflict when it comes to voice command. Torque steer shows up under hard acceleration.

With the 2017 Cadenza, Kia brings just about everything you could want in a modern, premium sedan, except for any real sport character.

The front end in particular gives the Cadenza presence. Departing from the Tiger Nose grille of other Kia vehicles, the Cadenza presents a refined-looking lateral slot with vertical bars, bookended by LED headlights accented by snazzy zig-zag parking lights.

Looks aside, the Cadenza proved a comfortable driver for day-to-day trips, with very modern electronics for driver assist and in the dashboard. However, it also showed me that not all Apple CarPlay implementations are equal. 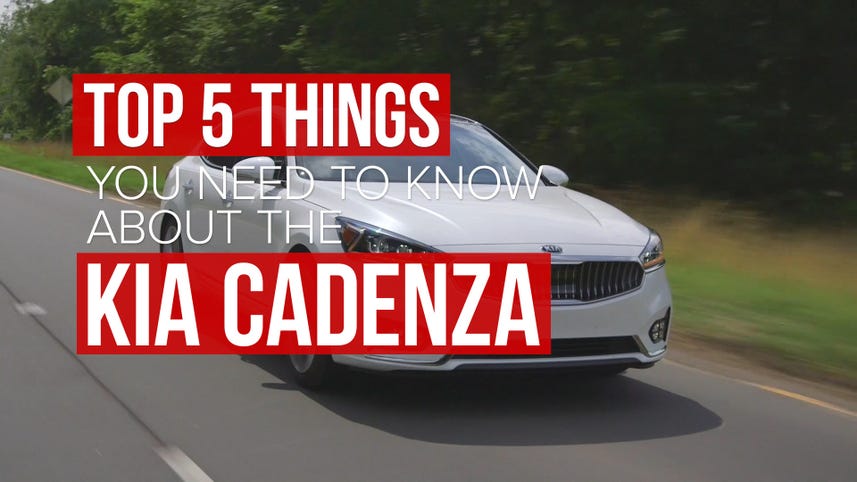 Five things you need to know about the 2017 Kia Cadenza
1:10
Watch Now

Kia's second largest sedan, the Cadenza comes in a little bigger than a Lexus ES or Mercedes-Benz E-class, and a little smaller than a Chevrolet Impala or Ford Taurus. By size, it comes closest to the Buick LaCrosse, which also seems a likely competitor in the premium sedan game.

Enhancing the premium feel, Kia loaned me a top-trim Cadenza Limited, which not only carries driver assist features such as adaptive cruise control and a Harman Kardon audio system, but piles on the interior class with quilted leather on the seats. Below the Limited, Kia offers trims for the Cadenza called Technology and Premium, the last being the bottom tier. The approximately $12,000 delta in pricing between top and bottom trims might make some buyers wish for a more robust option list, but these different tiers are largely mono-spec.

Beyond the lux and tech trimmings, all Cadenzas run the same drivetrain and suspension. Under the hood, the direct injection and naturally aspirated 3.3-liter V6 generates 290 horsepower and 253 pound-feet of torque, turning the front wheels through an eight speed automatic transmission. And no adaptive suspension here, just a firm and pliant conventional MacPherson strut up front and multi-link at the rear setup.

Also standard across the Cadenza trims, Kia supports both Android Auto and Apple CarPlay, showing up on a 7-inch screen for the base Premium model, and an 8-inch screen for the Technology and Limited trims. Those two upper trims include onboard navigation, although with smartphone integration you don't really need it.

I'm generally pleased with the 8-inch navigation infotainment system in the Cadenza Limited. This responsive touchscreen-operated system uses an intuitive interface and doesn't try to do too much. It includes onboard navigation, stereo and a Bluetooth hands-free phone system. The home screen shows navigation, audio and a few menu items in three windows.

The one sticking point I found with this system was how it relies on Apple CarPlay for audio playback from an iPhone, rather than including its own native iPhone audio integration software. That may not sound like a bad thing, but when I plugged my phone into the car's USB port, but still used the Cadenza's onboard navigation, it ran Apple CarPlay and its own system in parallel. In this admitted corner case, voice command goes to Apple CarPlay, so I could not use voice to set a destination or cancel a route in the car's own navigation system.

Why would I want to use the Cadenza's own navigation over Apple's? Data use aside, the Cadenza shows turn-by-turn directions in its head-up display, an incredibly useful piece of technology that projects information on the windshield. The Cadenza's head-up display also shows vehicle speed and whether cars are in your blind spot. The high-resolution projection looks very good, and made it so I rarely looked down at the instrument cluster.

The main reason I found to look at the instrument cluster was to set the Cadenza's drive mode. Pushing a button on the console, I cycled through Comfort, Eco, Sport and Smart modes. Each adjusted throttle, transmission and steering, but not the suspension, which is fixed. While the first three modes are self-explanatory, detuning or sharpening throttle response, Smart mode attempts to gauge your current driving style and automatically adjust. For example, in stop-and-go traffic the system might engage Eco mode, as you don't need quick throttle response.

I could not really discern when Smart changed between Comfort and Eco modes, and I never felt it engage Sport mode. Either I didn't drive the Cadenza hard enough, or Sport requires that the driver set it.

While Eco detunes the throttle the most, I generally found the Cadenza eager to accelerate. It didn't take much pressure on the gas pedal to strip a little rubber from the front tires, and when I really put it down from a stop, I felt a bit of torque steer. 253 pound-feet from the 3.3-liter V6 may not sound like a lot, but the eight speed transmission puts it to work.

However, the fact of the Cadenza's front-wheel-drive architecture should be a clue that it isn't much of a sport sedan. Through some twisties, the handling didn't feel particularly sharp and understeer, typical for a sedan of this size, made the corners a challenge.

The Cadenza felt in its element during more typical highway and city driving, making for comfortable and tech-ready transportation. The eagerness of the engine made getting ahead of traffic or merging into lanes easy. That power overhead also gave me confidence to make passes on two lane highways. The transmission shifted seamlessly, so that it never left the Cadenza flat-footed when I wanted acceleration, and settled into its fuel-saving overdrive gears as I cruised down the freeways.

That transmission helps the Cadenza earn EPA fuel economy of 20 miles per gallon city and 28 mpg highway. I couldn't help thinking while driving the car that an idle-stop system would improve the city economy.

Kia tunes the Cadenza's suspension on the firm side, making it feel steady on the road while still competently absorbing bumps. Those seeking a softer ride might prefer a Lexus ES or Buick LaCrosse.

The icing on the cake when taking the Cadenza on the highway proved to be its adaptive cruise control, which automatically matches speeds with slower traffic ahead. This system brought the Cadenza to a full stop when traffic stopped ahead, decreasing my personal stress in traffic jams. Along with that system, and its associated pre-collision warnings, the Cadenza's surround view camera came in handy as I maneuvered through parking garages.

The 2017 Kia Cadenza brings the brand's reputation up not just for its looks, but also for the excellent array of usable technologies in the car. However, buyers may need to put aside brand biases to consider the Cadenza. Those who are looking for value in a premium sedan, and can get beyond the typical German or Japanese choices, will find an extremely satisfying and competitive vehicle. Although far from a thoroughbred sport sedan, the Cadenza works admirably as modern, stately transportation, good for just about everything a sedan should do.

Base price for the Cadenza Premium only runs to $31,990, but the Cadenza Limited I drove came with a $44,390 sticker. Frankly, I would take the middle ground, the Cadenza Technology, for $38,990. It comes with the full array of cabin and driver assistance technologies, including an 8-inch touchscreen, head-up display and adaptive cruise control, merely lacking some of the appointments of the next trim up, such as quilted leather.

That pricing represents a good value when compared to its closest competitor, the Buick LaCrosse, which starts at $32,065. It'll cost you $38,900 to get into a Lexus ES, and the premium sedan prices just go up from there.