2017 Karma Revero: Hybrid sedan is back from the dead and better for it

A stylish hybrid sedan gets a second chance at life with improvements to the drivetrain, build quality and new infotainment interface.

If the 2017 Karma Revero looks an awfully lot like the Fisker Karma that went out of production at the end of 2012, your eyes aren't deceiving you. The stylish GT car is getting a second chance at life thanks to Chinese auto parts maker Wansiang, which purchased the remains of bankrupt Fisker Automotive and its battery supplier A123 Systems. Out of those ashes comes Karma Automotive, which began delivering the reborn 403-horsepower Revero hybrid sedan in June.

The long road to launching the Revero involved the company rebuilding its workforce, taking it from 29 people just three years ago to the present 900 headcount. Then there was the task of reworking the car that was rushed to production under Fisker's watch. The hybrid drivetrain was coarse with noticeable shudder every time the gas engine kicked on. Build quality was far from top-notch, while small details such as the lack of backlit door and steering controls made navigating the interior at night difficult. 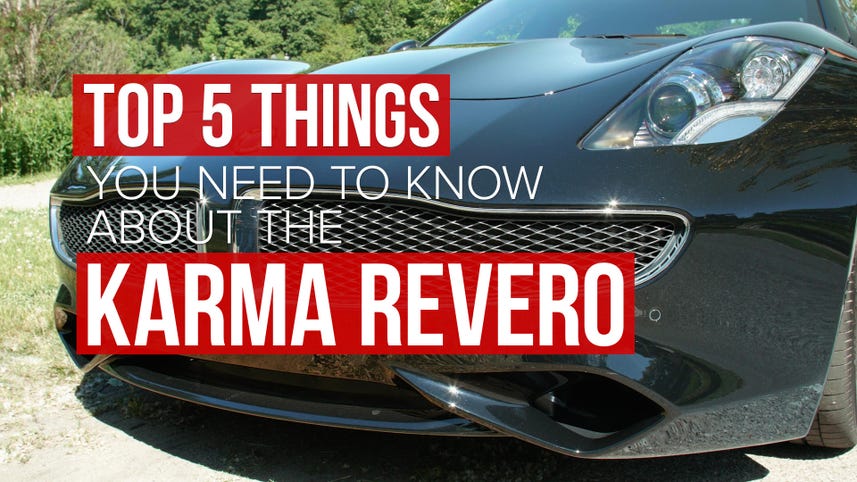 While looking over the car in person, Karma's hard work appears to have paid off. Panel gaps are tight and consistent, and the paint job looks flawless. Besides the hand-painted Karma Automotive badges, the Revero looks like the Fisker I drove five years ago.

Karma officials acknowledge the original Fisker Karma wasn't up to snuff and have taken the necessary time in hopes of getting it right. Originally, the new company wanted to launch the Revero last December, but delayed it to June to get things just right. Everything in the car has been revalidated, from big items like the drivetrain to smaller details such as hood and door seals. Oh, and setting up a production facility in Moreno Valley, California to build the cars was also on the list of things to do.

Inside, the front seats are comfortable and supportive, materials are high quality, all controls are now backlit and there's serviceable space. Things in back are tighter, but adequate to shuttle around a couple of folks for a night on the town. When I finally get rolling on a brief drive route, NVH improvements become clear as minimal wind and tire noise creeps into the cabin, which is especially impressive considering the massive 22-inch Goodyear Eagle F1 Supercar rubber.

Likely the biggest interior upgrade centers on the 10.2-inch infotainment touchscreen that Karma developed in-house. Unlike the half-baked system in the Fisker, the Revero's system is quick to respond to commands, intuitive to work through and features slick graphics. Bluetooth is standard, while both Apple CarPlay and Android Auto will come later this year. Disappointingly, satellite radio isn't available.

2017 Karma Revero looks like a Fisker, but much improved underneath

The familiar hybrid drivetrain consists of a General Motors-supplied 2.0-liter turbocharged four-cylinder and two electric motors, providing net system output of 403 ponies and an incredible 981 pound-feet of torque. Dropping the hammer smashes occupants into seatbacks as the Revero sprints to 60 mph in 5.4 seconds, which is downright quick for a 5,400-pound car, but not quite as fast as base versions of the all-electric Tesla Model S.

Karma claims a total driving range of roughly 300 miles when factoring in both the electric motors and gas engine with up to 50 miles coming on electricity alone. A slight range increase comes courtesy of the solar roof, which is now capable of providing around a mile of additional range on sunny days. Previously, the solar roof could only power interior systems and not the drivetrain.

However, the Revero's official EPA figures say the company's estimates may be optimistic, with an electric range rating of 37 miles and total range coming in at 240 miles.

When it comes to juicing up, using a DC quick charger gets a drained battery to an 80 percent state of charge in 24 minutes. Plugging into a regular household outlet requires 10 hours for a full recharge.

Through a couple of bends, the Revero stays flat and begs for a more thorough workout. With the big tires, buttoned-up suspension and direct steering, I suspect it will do well on a winding back road, but my drive is almost entirely on busy urban streets. Over bigger bumps the suspension offers enough give for ride quality that's suitable for daily driving.

I'll need additional time with the Revero on more entertaining roads before drawing a complete conclusion on the second coming of this hybrid grand tourer, but it made a positive initial impression. Higher levels of refinement back the car's standout appearance.

With production numbers like that, spotting a Karma Revero in the wild likely won't happen often, but if you do, know that it isn't just the Fisker Karma. It's a car that's much better and is what should have hit showrooms in the first place.

Update, Sept. 5: This story has been amended to reflect the EPA's fuel economy estimate, which contradicts Karma's earlier claims.