By taking the best from the base Corvette Stingray and the lightning fast Z06, Chevrolet has produced the track-ready Grand Sport.

The latest generation Corvette, introduced in 2014, revived the Stingray name and the world went a little bonkers. Some felt that the complete redesign looked a little too Ferrari, while others bemoaned the new rear fascia. However, all agreed that the 6.2-liter V8 engine under the hood stayed true to the 'Vette's two-seat, rear-wheel-drive sportscar roots.

Solid brakes and an excellent cooling system make for long stints at the track. It's cool to check out your racing stats in the easy to operate Performance Data Recorder.

The steering in Track mode is ultra-heavy and requires more muscle than most will be willing to give. 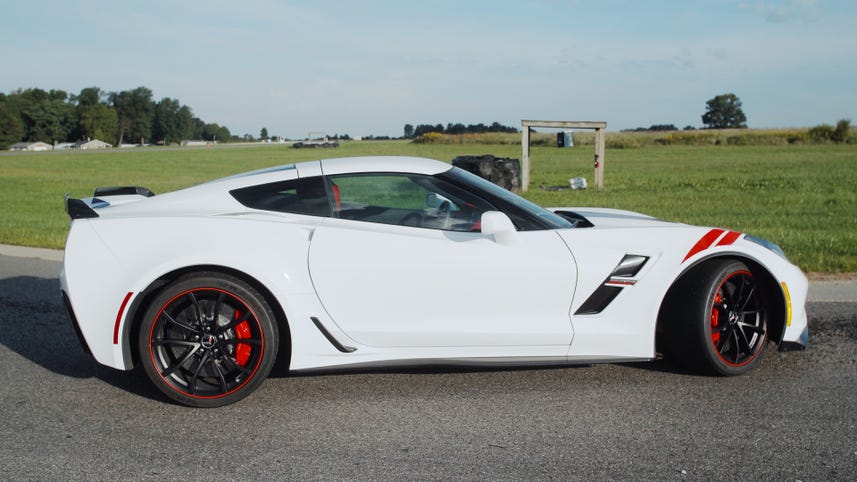 The Corvette Grand Sport is the 'Vette you want
4:23
Watch Now

Introduced in 1953 with a six-cylinder engine and a two-speed automatic transmission, the Corvette didn't really become a true sports car until three years later. GM equipped the 'Vette with a small block V8 and a three-speed manual transmission and raced it in 1956 and 1957 at the 12 Hours of Sebring. Although GM didn't have a very successful campaign those years, it set the stage for the sports car we know today.

Through constant development both on and off the racetrack, that original six-cylinder, 150 horsepower engine has now morphed into its current 460 horsepower V8 iteration in the Corvette Stingray. Chevrolet also produces the ridiculously fast Z06 Corvette for those who wanted even MOAR POWAH, but with 650 galloping horses under the hood, the "Big Nasty" can be a little intimidating.

Enter the Corvette Grand Sport. It's like the Stingray and the Z06 had a baby, each giving the best of their DNA. The Stingray contributes the naturally aspirated 6.2-liter V8 engine, knocking out 460 horsepower and 465 pound-feet of torque. As part of its Z06 genes, the Grand Sport borrows the cooling system, bigger Brembo brakes and Michelin Pilot Super Sport tires.

Like all Corvettes, power goes to the rear wheels via the standard seven speed manual transmission, but an eight-speed auto is optional. An electronic limited-slip differential and Magnetic Ride Control suspension are standard, though also available on the base Stingray with the Z51 Performance package.

The Grand Sport offers five different driving modes: Touring, Sport, Track, Weather and Eco. I had the track all to myself at Gingerman Raceway in Michigan, a fun little road circuit just over two miles long, with plenty of late apexes and reduced-radius, off-camber turns. I set the car to track mode and zoomed out of the pit lane.

The Grand Sport can handle 1.05 g in the twisties, but Chevy sent me something just a bit better. My test vehicle came with the optional Z07 performance package, bringing in carbon-ceramic brakes, a carbon-fiber aero package and super-sticky Michelin Sport Cup 2 tires. It's a $7,995 option that helps you get around the track faster -- not by brute power, but by virtue of more downforce, better cornering capabilities and the chance to brake later into the turns...if you dare.

My first thought after turn one: "Holy mackinoly this steering is heavy!" I'm not one to shy away from using muscle, but in track mode the Grand Sport felt like it had no assist in the steering rack at all.

Still, the turn-in is very sharp indeed. The Magnetic Ride Control adjusts the suspension 10 times faster than the blink of an eye, keeping everything flat through the turns. The Cup 2 tires offer massive grip, and with the extra aero package, the car never got out of sorts. The brakes felt solid through all of my sessions, never fading or getting spongey. Essentially I just pointed the 'Vette and jammed on the gas, the Grand Sport obeying my commands with no trace of understeer, just good old American fun.

Aside from the aforementioned steering feel in Track mode (Sport mode brings up the power assist considerably), I do have one complaint. The throttle tip-in point, even in Track mode, just wasn't quick enough. I tend to be late getting back on the gas anyway, and I really had to anticipate my corner exits and pre-load the right hand pedal to carry speed through the turns.

The Grand Sport makes it easy to manipulate the transmission on the track thanks to automatic rev matching. It's turned on by clicking what looks like a paddle shifter, which is a little bit of a cheap-o move on Chevy's part. I get that it's more cost effective to use the same steering wheel for both the automatic and manual versions, but come on, y'all. How hard would it be to add some lines of code to the MyLink system?

Chevrolet claims a 0-60 mph time of 3.6 seconds, a bit slower with the manual. On the one third mile back straight at Gingerman, I saw upwards of 120 mph before I punked out and hit the brakes. With a top speed of 175 mph, I left a lot of velocity on the track.

The Grand Sport, like all Corvettes, comes with a Performance Data Recorder (PDR), something I wish was in all sports cars. A simple tap on the 8-inch touchscreen launches the PDR. There are various data overlays to choose from, everything from speed, rpm, throttle and steering angle, track position, g force and lap times while in track mode to performance metrics (read 0-60 mph or quarter mile runs) to just video and audio for those meandering road trips. Everything is stored on an SD card. You can watch it right there in the car or upload it to your computer -- and then to the YouTubes! A free download of the Cosworth Toolbox to your PC helps make sense of all the data, and you can even pull in the lap data from another driver and run it side by side with yours.

Apple CarPlay and Android Auto are standard. The Chevy MyLink system offers up navigation, satellite radio, Bluetooth and all the other goodies we have come to expect in new cars these days. The system gets the job done, but is a little slow and clunky. I didn't get to play around with it too much as all my time was spent on the track. It seemed to be good enough, just not wow-inducing. Like all Chevrolets, a 4G LTE wi-fi hotspot is available.

The Corvette Grand Sport is one of the easiest cars on the market to drive fast. In fact, with it's stellar Magnetic Ride Control, impressive brakes and sticky tires, it makes you a better driver than you probably deserve to be.

Starting at $66,445, it comes out to $144 per horsepower, which is great value. Rivals such as the Porsche 911, Jaguar F-Type can't compare, although the BMW M4 comes close at $155 per horsepower. However, the Ford Shelby GT350 Mustang spanks them all, costing a mere $105 per horsepower.

Not that you would end up with just the base Grand Sport. For $4,000 more you can have it in a convertible, while the Z07 Performance package adds another $7,995 and is well worth the money.

Some folks may scoff at the idea of the Grand Sport. Why leave all that horsepower to the Z06? Let's be honest. How often can you really exploit 650 horses? How often can you do it without getting arrested? At Gingerman the only time I made it out of fourth gear was on the rear straight. Most of my time was spent in third gear, or even second. Huge power numbers can only get you so far, and the Grand Sport, with "only" 460 horsepower, puts it all on the table with impeccable handling and grip for days. Now, if I could only get on the gas sooner.