Chevy brings us not one but two track-ready Camaros for 2017: A nimble V6 and a rumbling V8.

The little econo-box car quickly grew in my vision as I approached from behind in the 2017 Chevrolet Camaro 1LE. We were on a two-lane desert road somewhere outside of Pahrump, Nevada, with only the gorgeous mountains and scrub bushes to watch over us.

As I zoomed past the smaller car, I thought, Sucks to be in a little four-cylinder. I bet that guy is only going 40 miles an hour.

I looked at my speedometer and realized that no, he was probably at the speed limit, as the Camaro traveled at triple-digit speeds.

Relativity. It'll get you.

Chevrolet seems to be going after the niche market with its 1LE package for the Camaro on both the 335-horsepower V6 and the 455-horsepower V8. For the first time it has taken the standard V6 and given it a bit of cojones. The V6 1LE gets the sport suspension from the Camaro SS plus Goodyear Eagle F1 run-flat tires capable of maintaining grip to 0.97g. Brembo brakes improve stopping power and an upgraded cooling system for the engine, transmission and mechanical differential allows for all-day track driving.

The V8 1LE gets the Magnetic Ride Control adaptive suspension from the ZL1 Camaro as well as Goodyear Eagle Supercar tires, good for 1.02g, bigger Brembo brakes, an electronic limited-slip differential and the same upgraded track cooling system as the V6 1LE.

What does all that mean for you? Choices, my friend. You can get a standard V6 or V8, the track-focused V6 or V8 1LE, or the bonkers ZL1. Pick your poison.

I was lucky enough to drive both the V6 and V8 1LE on the road and at Spring Mountain Raceway during a Chevrolet-sponsored press event. Both offer their own unique driving experience with their own pros and cons depending on your driving skills.

On the road, the V6 1LE feels comfortable and could easily be a daily driver. I heard wind and road noise, but it wasn't intrusive. Three driving modes are available: Tour, Sport and Track. I flipped back between Tour and Sport, but couldn't really feel a difference in the ride. It's a bit on the stiff side but still comfortable enough for long road trips.

Most of our drive featured long desert straightaways with gently sweeping turns. The 3.6-liter V6 delivers a perfectly adequate 335 horsepower, but at only 284 pound-feet of torque, it's a touch slow off the line. In fact, the 2-liter, four-cylinder turbo on the base Camaro has more torque. Chevy says 60 mph comes in 5.2 seconds and that it runs the quarter-mile in 13.7 seconds at 102 mph. These numbers seem in line with what I experienced on the road.

Hopping into the bigger V8 1LE is like going from a sprightly horse to a galloping stallion. The 6.2-liter engine made its 455 horsepower and equal amount of torque known as soon as I hit the gas. It gobbles up pavement like a crazy hyena, going from 0 to jail faster than you can say, "Really, officer...speeding is my job."

Obviously, zero to 60 numbers are better in the more powerful V8. It can reach 60 mph a full second faster and runs the quarter-mile in 12.5 seconds at 115 mph. It gets Tour, Sport, Track and Snow/Ice driving modes, but like the V6, it was tough to tell the difference between Tour and Sport.

Both cars come with a six-speed manual transmission with a short-throw shifter, and aside from a badge and slightly different front fascias, both look the same to all but the fiercest Camaro nerds. The hood is wrapped in black and there is a quietly aggressive three-piece blade spoiler mounted on the rear. Each car has a front splitter and staggered forged aluminum 20-inch wheels.

The Chevrolet MyLink system in the Camaro has an available 8-inch touchscreen with Apple CarPlay and Android Auto. Siri Eyes-Free and satellite radio are both standard, but navigation is optional. In a blow to all high school kids everywhere, the Camaro comes standard with Chevrolet's Teen Driver, which helps parents track their kids' driving performance and will even be as mean as to mute the radio until the front seat belts are fastened.

Track is where it's at

I started my track day at the 2.1-mile East track at Spring Mountain Raceway with the V6 1LE. Instructor by my side, I found that what the V6 lacks in brute strength, it makes up in lithe nimbleness. Sure it's still frustrating to be hammer-down on the throttle on the straight-away and watch the speedometer climb ever so slowly to triple digits, but the V6 carries an incredible amount of speed through the turns.

And grip? I had my doubts about the run-flat tires, but these do their job well, never letting go of the pavement. The V6 does not have a rev-matching feature, but the pedals are spaced close enough so that even my dainty lady feet could heel-toe like a champ.

The V6 is a perfect example of "It's more fun to drive a slow car fast than a fast car slow." While "slow" might not be the exact right word for the V6 Camaro, it certainly requires a driver to keep the rpms up on the pipe and carry momentum to get it around the track quickly. Since I didn't have the luxury of high horsepower, I constantly had to push through any hesitations I had and keep my right foot firmly planted on the accelerator.

The V8, however, is a whole other Oprah. Let's just say I was happy for the bigger Brembo brakes. Speed comes on much more quickly, forcing me to use those brakes more heavily than I did in the V6. While I didn't notice any egregious amount of body roll in the V6, the Magnetic Ride Control keeps the V8 flat and neutral through most turns.

I say most turns, as there were a few times when the power got the best of me and the rear kicked out a bit. Most of the time a little counter-steer was all it took to bring things back in line, but on my last lap (it's always the last lap), the rear came around and I found myself facing the wrong way.

All of my racing experience has been in underpowered cars; think Miatas and air-cooled Volkswagens. At this point in my career, I prefer the Camaro V6 1LE as a track car. It's got enough power to be fun, but not enough to get away from you or end your day in a spectacularly awful fashion. 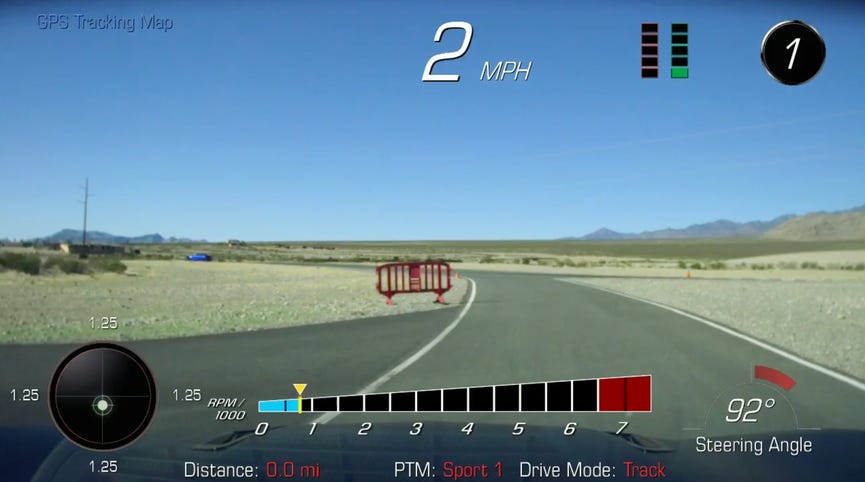 Take a lap around Spring Mountain Raceway in the 2017 Camaro 1LE
1:58
Watch Now

Having said that, if I were just looking for a street car, it's V8 1LE all the way. The straight-line power is exhilarating and public roads with the same kind of challenges as the East track are few and far between.