With a massively improved infotainment system and driving dynamics that err toward sport over luxury, the CTS V-Sport is a good time for drivers and technophiles alike.

It's hard to build a luxury car that also wants to be sporty. Sacrifices must be made somewhere in order to deliver both, whether it's pulling back on the fancy stuff (which can jack up the price and the curb weight) or softening up the sport.

The CTS V-Sport's new infotainment system is better than ever, it packs tons of hustle and the new Recaro seat option is bucket bliss.

It sacrifices luxury in favor of sporting pretense, and that shows inside. And with some options, the window sticker can skyrocket.

If you're looking for a sport sedan that isn't over-the-top fancy, the 2017.5 CTS V-Sport is a proper competitor for the Germans.

The Cadillac CTS V-Sport is not the most bonkers CTS there is -- that's what the 640-horsepower CTS-V is for. The V-Sport sacrifices some of the CTS-V's outright performance insanity in favor of a more sedate, pleasant experience. But make no mistake -- this is still a sporty option, and it shows in the ride quality.

But the V-Sport is more than just a good engine and a chassis that likes to play hard. Like many other late-model GM vehicles, it's a technological marvel, equipped with safety systems and a brand-new infotainment system that addresses most, if not all of the system's previous shortcomings. It's the whole package, and provided you don't mind some of the sacrifices on the luxury side, you should walk away pleased with this one.

Pretty but not a game-changer, especially inside

Make no mistake, the current Cadillac CTS is a looker. The front end is a melange of straight lines that manage to flow rearward without adding too many sharp angles to the side. The rear is a little more anonymous, but the package is cohesive and it earned more than a few compliments during my weeklong loan.

That said, this car has been in production since the 2014 model year, and is thus looking a little old compared to flashy new competitors such as the redesigned BMW 5 Series and Mercedes-Benz E-Class. The CTS is a good car on its own, but being in a segment with a bunch of newer designs puts it at a slight disadvantage.

The interior is a mixed bag. The design is sleek and modern but I have some qualms with the material quality, especially on the center console and around the infotainment screen -- it just doesn't feel like it's worth the V-Sport's $70,000 base price. Nearly every color is some sort of black or gray. This leads to a feeling of drab claustrophobia, as the center console is rather high and separates the driver into his or her own tight little cockpit.

This is the point in my review where I remind not only Cadillac, but all automakers that piano-black trim is not fancy. It collects dust and fingerprints like a magnet, which leads to a well-worn look within a few short trips. Please... no more.

The shining beacon of awesome in the CTS V-Sport is a pair of optional Recaro front seats. Part of a $3,000 aesthetics package, the Recaros (borrowed from the CTS-V) are insanely comfortable and can be configured to fit drivers and passengers large and small. I want all cars to come with these seats. As for the rear seats, they're surprisingly tight for a larger luxury car, especially for passengers over six feet tall.

Hustle gets fancy in the 2017.5 Cadillac CTS V-Sport

Infotainment: From zero to hero

I'm not going to mince words here: The previous iteration of CUE (Cadillac User Experience) sucked. It was ugly, it was slow and just about every critic panned it. But that doesn't matter anymore, because there's a new CUE, and it's actually amazing.

We're covering CUE 2: Electric Boogaloo in depth in a standalone story, so I'll be brief here. The new user interface is snappy and attractive, the navigation map takes almost no time to render, and a new user-based system allows for a massive amount of personalization, down to suggested navigation routes. It'll start out on this 2017.5 CTS, making its way to other Cadillac vehicles over the course of years, so patience is a virtue here. Apple CarPlay and Android Auto are both included.

Otherwise, the CTS V-Sport is still quite the technological marvel. GM's excellent OnStar 4G LTE Wi-Fi hotspot provided seemingly undefeatable reception, even when my cell phone was struggling. The digital Full Display Mirror uses the backup camera to effectively eliminate rear blind spots, even with a full backseat. Its change in angle takes some getting used to, and precipitation can obscure the camera's view, but it's nice to have the option, and you can still use the FDM like a regular rearview mirror if preferred.

The V-Sport's Premium Luxury trim comes standard with Driver Assist Package, which comprises full-speed adaptive cruise control and autonomous emergency braking. The auto-braking system didn't come on unnecessarily early, and the adaptive cruise control worked well, without lots of weight shifting under acceleration or braking. As with many other large-ish cars, having parking sensors is all but a necessity. 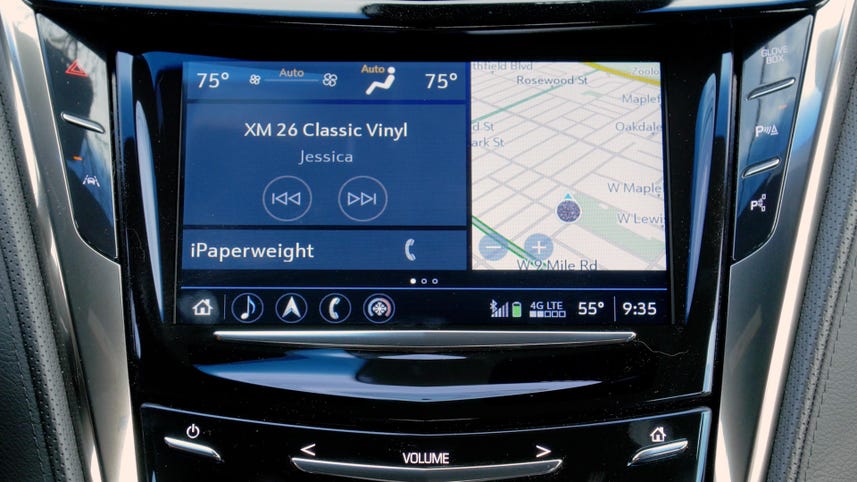 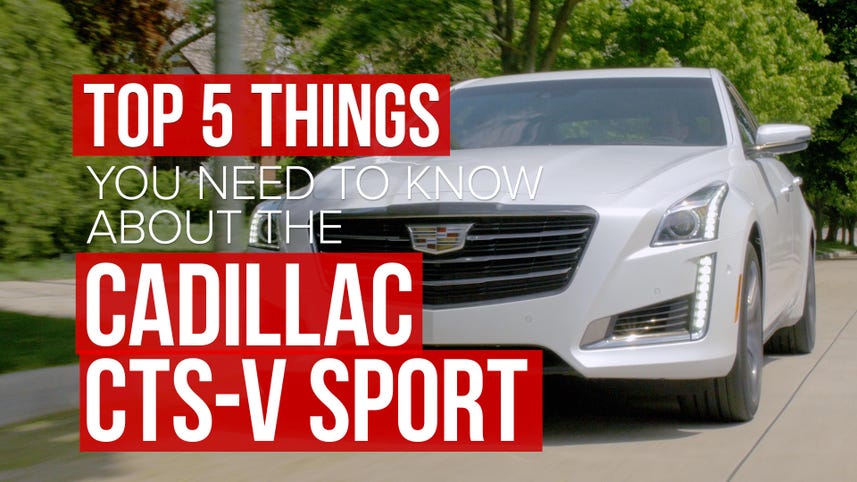 Heavy on the hustle

It might not necessarily look the part, but the CTS V-Sport can move. Its 3.6-liter, twin-turbocharged V6 puts out 420 horsepower and 430 pound-feet of torque, all of which is sent to the rear wheels by way of an eight-speed automatic.

It doesn't take much throttle to start moving with authority. Even though it's not the CTS-V, its exhaust is not at all quiet, emitting a decent growl, even with the two turbochargers acting as additional mufflers. Throw the vehicle in Tour (default) or Snow/Ice mode, and the throttle is easy to manipulate. Things get much livelier in Sport and Track modes, the latter of which you definitely don't want to use on public roads.

The steering is tight and accurate, tighter than most luxury cars, in fact. Standard magnetorheological shocks (called Magnetic Ride Control) are almost preternatural in function. The system soaks up bumps without feeling like a boat adrift, yet it's still very lively when you start tossing the car around. It's always fun to drive, but that chassis rigidity means a driver should not expect a ride as sedate as the competition -- the air suspension on Benz's E-Class, for example, offers more comfort and about equal sportiness, depending on vehicle mode.

The 8-speed transmission was generally smooth, but puttering around town at low speeds can elicit some uncharacteristically firm shifts, even in Tour mode. It sort of pulls you out of the experience, which is a shame. 95 percent of the time, though, it works quite well.

Fuel economy isn't great on paper, with the EPA rating the V-Sport at 16 mpg city and 24 mpg highway. With a light foot, I saw highway figures around 26 mpg, but as usual, I had a much harder time meeting the city figure -- I averaged about 14-15 mpg around town.

Our CTS V-Sport tester bumped its $70,795 base price (in Premium Luxury trim) up to $76,480 with options. That's about on par with its Teutonic competition, but you get a bit more bang for your buck here. That said, I'd do away with a few options to bring that price a little lower.

You can get a V-Sport starting at $61,690, but you lose some really great options, like the digital gauge cluster, head-up display and the aforementioned safety systems, so I wouldn't take that route. Black and silver are the only free color choices, with other hues being offered for $595 or $995. I quite like white on this design, so I'd stick with the $995 Crystal White Tricoat.

The Carbon Black package, which adds those great Recaro seats along with dark trim elements in the grille and wheels, is expensive at $3,000. But those seats are so good, I'd spring for it, and would recommend others do the same.

The only options I'd really ditch are the dealer-installed ones -- the $395 suede steering wheel and the $200 microfiber shifter. That drops the base price to $75,885, which is still a lot of money, but in my opinion, it's the perfect spec for this car.

The 2017.5 Cadillac CTS V-Sport is most comparable to the BMW M550i xDrive, Mercedes-AMG C43, Audi S6 and Genesis G80 5.0 Ultimate. Its fuel economy is dead even with the Genesis, while the Bimmer beats it by 1 mpg on the highway. The Merc and Audi are the mileage heroes, with respective figures of 18 city to 25 highway and 18 city to 27 highway.

In terms of output, they're all pretty close. The Caddy's 420 horsepower beats the Merc (396) and is even with the Genesis, but it falls behind the Audi (450) and the BMW (456). The Cadillac is rear-wheel drive only, whereas the Genesis offers both RWD and AWD, and every other competitor comes standard with AWD.

Personal preference will act as the tiebreaker here. The CTS V-Sport is more sport than luxury, and it may lack the semi-autonomous capabilities of its Teutonic competition, but with some solid safety offerings and a proper infotainment system, Cadillac no longer plays the most second of fiddles. If you can't break free from the German mold, you'll be fine, but if you want a lively ride with the tech and options to match, you'd be doing a disservice by not taking the CTS V-Sport for a spin.