The Escape offers versatility in its cabin and more power than the typical small SUV from its 2-liter EcoBoost engine, but the addition of Sync 3 for the 2016 model year really rounds this car out.

When Ford redesigned the Escape for the 2013 model year, it came out with an impressively modern small SUV benefiting from the latest Ford technologies. Less beneficial was MyFord Touch, however, the ambitious infotainment system that proved sluggish and cluttered.

With its 2-liter Ecoboost engine, the 2016 Ford Escape gets more power than the typical small SUV. Its responsive steering and comfortable ride make for an excellent driving character. The new Sync 3 infotainment system offers the quick interaction of mobile electronics, an intuitive layout and app integration.

Minor quibbles only, but fully optioned the Escape can get pricey. With the 2-liter engine and the all-wheel-drive option, fuel economy averages in the low 20s. Built-in online destination search would be nice.

The 2016 Ford Escape exhibits all the practicality of a small SUV and offers an excellent driving experience, with get-in-and-go ease. The new Sync 3 infotainment system responds as well as any tablet or smartphone, and its AppLink feature promises interesting future capabilities from third-party developers.

The 2016 Ford Escape retains all the goodness of its last update, but scraps MyFord Touch in favor of Sync 3, a wholly redesigned and reengineered infotainment system up to this car's overall modern appeal. With Sync 3, the 2016 Escape impressed me top to bottom, making for a comfortable, versatile driver with most of the high-tech amenities I could desire.

Those amenities came at a serious price, though, as the loaded Escape in Titanium trim that I drove came to $36,330, a big jump over the Escape's base price of $23,995. The extra cash brought in a more powerful, efficient engine, all-wheel drive, automated parking, leather-covered seats with power adjustment, a powered liftgate and that aforementioned Sync 3 infotainment system. You can probably find a suitable permutation of options in the middle of that price range.

UK and Australian buyers won't find the Escape in their local Ford dealer's lineup, but they will find the Kuga, which is essentially the same car. The base price for the Kuga comes to £20,995 in the UK and AU$27,490 in Australia, but Ford has not said when Sync 3 might be available in those markets.

Before I detail the wonders of Sync 3, the engine and driving experience needs some space, as they make the Escape a very practical car, suitable for a variety of uses. Although a small SUV, the cargo area is a full 34.3 cubic feet, with good depth and height. And that's behind the second-row seats. Fold those down and you're looking at 67.8 cubic feet. And in Titanium trim, I could make the powered liftgate open by just kicking my foot under the rear bumper. It's one of the Escape's neat tricks.

Adding to this Escape's price was the 2-liter Ecoboost engine, which uses direct injection and a turbocharger to produce 240 horsepower and 270 pound-feet of torque. Those numbers outstrip the competition, and I appreciated the ready throttle response, giving the Escape more than enough pep for passing and merging. In fact, the Escape's midtier 1.6-liter Ecoboost engine's 178 horsepower better matches competitive cars, such as the Honda CR-V .

That 2-liter engine was a good match for the Escape's six-speed automatic transmission, which shifted quietly and quickly, making for a smooth driving experience. Because every car needs some sort of sport setting, apparently, the shifter's "S" position maintains slightly higher engine speeds. In the Escape, this sport mode is not particularly useful, but a manual shift mode, controlled with a rocker switch on the shifter, could come in handy for heavy load or low traction situations.

The all-wheel-drive option in the Escape works automatically, with no driver controls such as a differential lock. That means front-wheel-drive bias with torque sent to the rear wheels as needed. It also brings the EPA average fuel economy down to 23 mpg, a 2 mpg loss over the front-wheel-drive version with the 2-liter engine.

What was a truly pleasant surprise with the Escape was the ride quality. While short of luxury, the Escape's suspension makes for very smooth driving, damping out vibration and jolts from rough pavement. I drove the Escape over a particularly challenging section of road, with deep undulations through a set of turns, and it did an admirable job absorbing that rising and falling terrain. After each crest, it settled back down rather than bouncing up and down.

And while I really liked the responsive steering feel, which reacted instantly to my inputs, the Escape feels a little top-heavy in the turns. Not surprising for a small SUV, the cabin sway kept me from pushing it hard through sharp turns. Ford equips the Escape with a vehicle stability program, of course, and also a corner braking system, which applies light braking to the inside wheels in a turn to help the car rotate. That corner braking system may help, but I can't say I felt it come into play.

Adding to what has been a well-mannered, practical small SUV, Sync 3 gives it a dashboard electronics platform equal in responsiveness to any tablet or smartphone on the market. Running on a Texas Instruments dual-core processor, onscreen buttons reacted instantly to my touchscreen inputs. More impressive, I could drag the map screens around, even when they were full of complex 3D-rendered buildings. I haven't seen that level of responsiveness from any other car-based navigation system and, as the maps are stored locally, I didn't have to wait for a data connection to fill in the screen, like I would with a smartphone app. 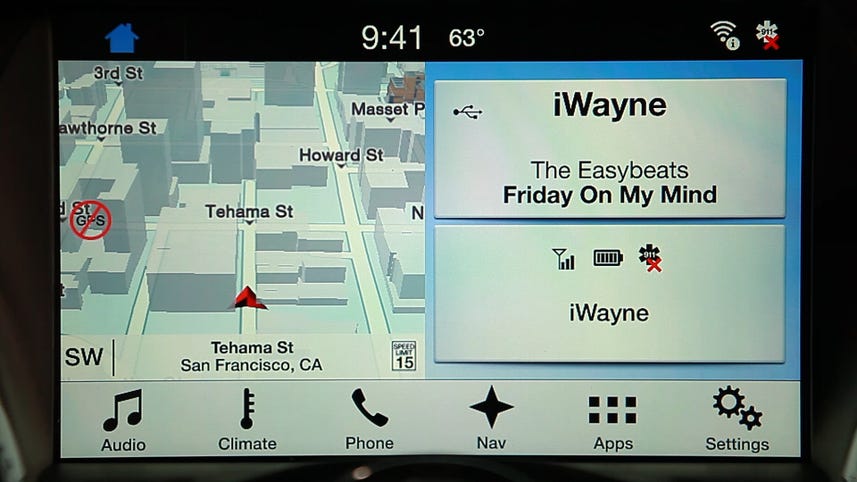 The layout of Sync 3 is smart, too, with a persistent menu car across the bottom of the screen giving me quick access to navigation, audio, phone and apps. That's similar to the UConnect system in the Jeep Cherokee .

Ford streamlines destination input with a single box for entering addresses, cities, or searching for points of interest, similar to using a maps app. However, Sync 3 doesn't do online search, so I ran into an instance where it did not have a listing for a newer local business that I was able to find on my phone's app.

What could mitigate that issue in the future is Sync 3's AppLink system, supporting third-party apps. Running Spotify and Glympse on my phone, I was able to interact with those apps on Sync 3's touchscreen. While only a handful of apps are currently supported, more should be coming rapidly. I would really like to see Yelp or a general online business search, like Google or Bing, made available here.

Sync 3's route guidance worked well, and I noticed the voice prompts seemed to be a carryover from the previous system. Traffic data, which comes from a satellite radio feed, showed good coverage, with flow information for some city streets as well as freeways. Still, I would like to see the even more comprehensive traffic coverage you get from Google Maps.

A smart feature of Sync 3's navigation automatically showed parking lot locations on the map once I reached a programmed destination.

Digital audio sources also carry over, with two USB ports in the console supporting USB drives and iOS devices, Bluetooth streaming, HD radio and satellite radio. The clean audio interface was easy to use and the audio source submenu is clear and uncluttered.

One minor bug showed up as the system switched between day and night modes, causing the audio stream to temporarily pause.

Voice command, which allows extensive control over infotainment features, carries over from the previous system. That means making separate commands for address entry and searching points of interest, which doesn't quite match the single box destination entry. However, the system supports Siri for iPhone uses, passing through voice commands making it easy to hear and respond to text messages while on the go, for example.

Neither Apple CarPlay or Android Auto are supported yet, although a Ford spokesperson said the company may add those features.

As a final note, the Sony audio system here, with 10 speakers, sounds excellent. It produces well-balanced sound across the frequencies with fine detail. I enjoyed listening to acoustic guitar pieces, distinguishing the musician's fingers on nylon strings, or tracks with complex layers and deep bass.

It's hard to find fault with the 2016 Ford Escape, especially in Titanium trim. Loaded up, the price gets high, but dropping all-wheel drive and the 2-liter Ecoboost engine will shave off a considerable amount, putting the Escape more on par with the small SUV competition as to power. Losing those options will also bring fuel economy from a low-20s average to high-20s.

To get Sync 3, which is definitely worth it, you will need to at least get the SE trim Escape. That model also comes with the 1.6-liter Ecoboost engine. The Titanium trim model I drove also came with a blind-spot monitor and automated parallel parking, both of which worked very well. Those features, and the Sony audio system, make a good argument for the Titanium trim.

The Escape's responsive steering and comfortable suspension tuning will come standard across the lineup.

The small SUV market is crowded, with stalwart competitors such as the Honda CR-V , Toyota Rav4 , Kia Sportage and even the Jeep Cherokee . That makes for a lot of choices, especially as most of these vehicles offer versatile interior space and an easy driving character. The Escape's 2-liter engine, Sync 3 infotainment, and automated parallel parking all help distinguish it from the pack.